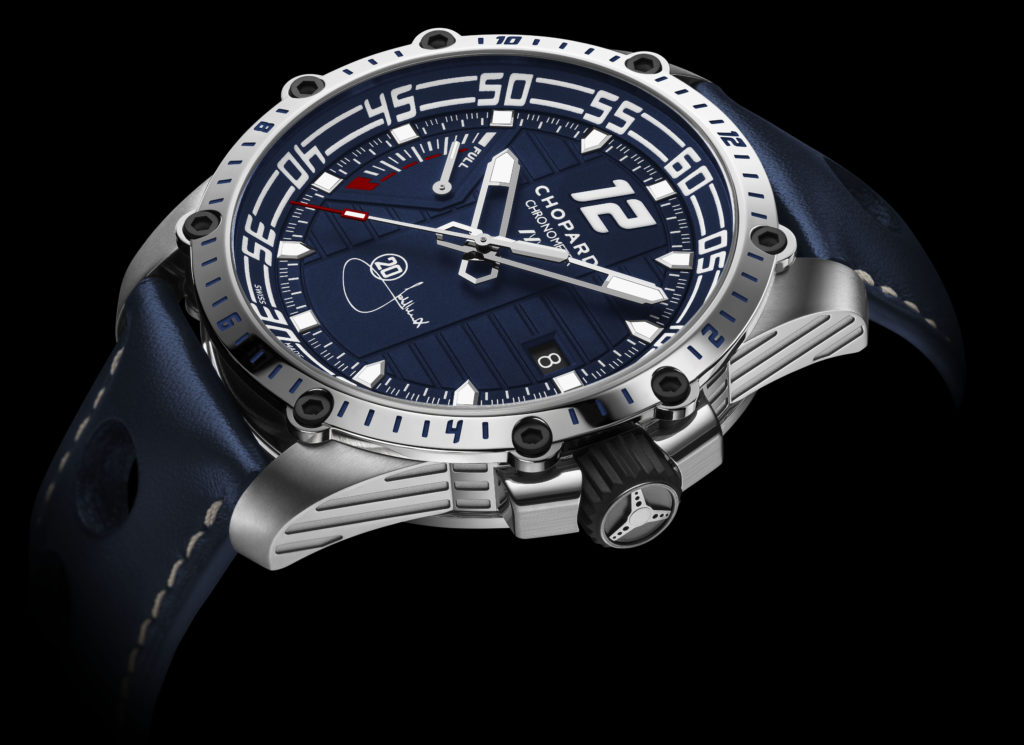 A unique chronometer for the Monaco Association against Muscular Dystrophy, signed by Jacky Ickx.

For the sixth time, Chopard commits to supporting the Only Watch charity auction by donating an exceptional creation in tribute to the world of motorsports: the Superfast 8 Hz Power Control Porsche 919 Only Watch 2017. This one-of-a-kind model equipped with a high-frequency movement has been specially created for Only Watch. It honours an exceptional driver: Jacky Ickx. Chopard has chosen this motor-racing legend and ambassador of the Geneva-based Maison to collaborate in creating this watch which aims at raising funds for muscular dystrophy research. This timepiece reflects the values shared by Jacky Ickx, Porsche Motorsports and Chopard: a passion for racing, backed by excellence and precision. 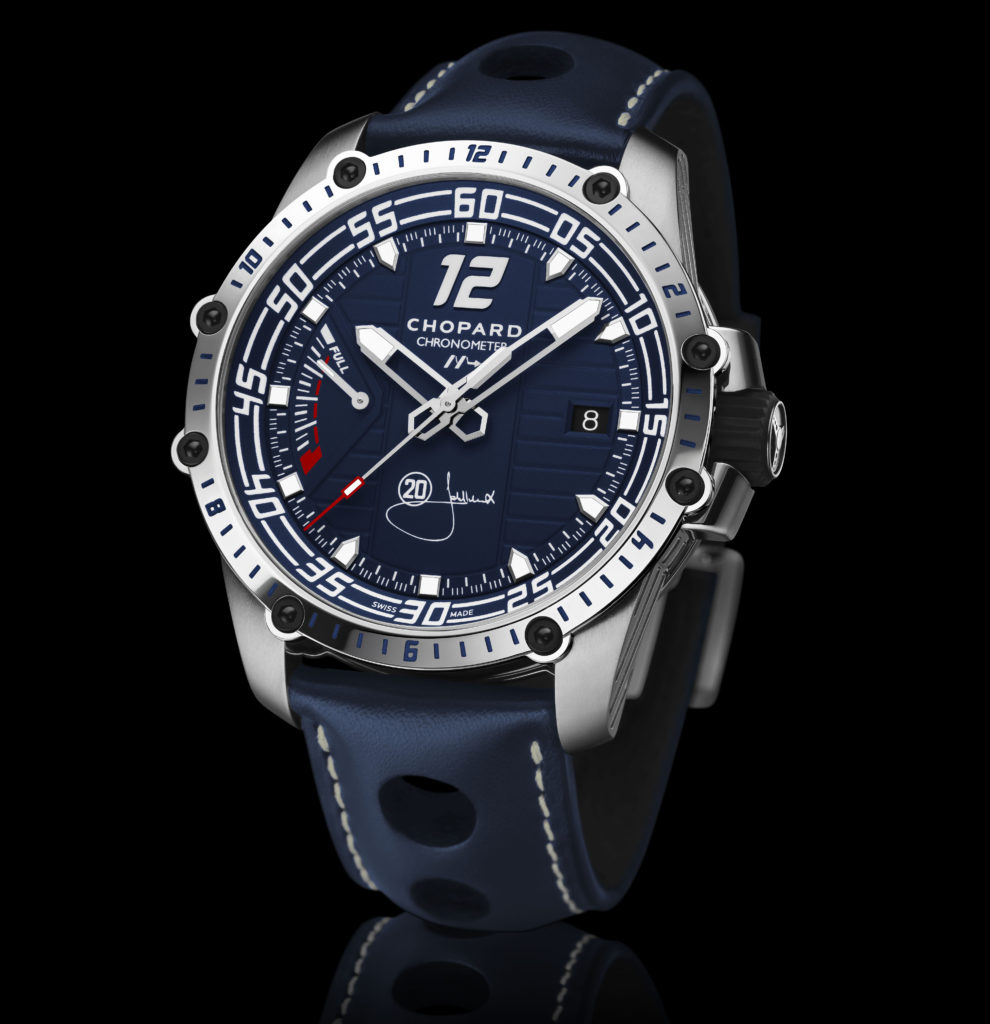 The Superfast 8 Hz Power Control Porsche 919 Only Watch 2017 embodies the alliance between Chopard’s watchmaking excellence and the expertise of Porsche Motorsport. This competition-friendly timepiece picks up the DNA of the Porsche 919 Hybrid. Its 45 mm case provides ample space for impeccable readability, while the use of titanium delivers outstanding results in terms of both resistance and weight – two key issues shared by the racing world. Its resistance to shocks and scratches makes it an ideal material for timepieces subjected to the stresses and strains of endurance racing. On the dial side, the hour-markers flaunting a racing-style design are swept over by facetted cut-out hands featuring tips enhanced with Super-LumiNova®, thus enabling swift and intuitive read-off by day or night. The seconds hand also carries a slim red tip standing out perfectly against the midnight blue dial.

A champion with a big heart and multi-facetted personality, this well-known figure in motor-racing and great friend of Chopard co-president Karl-Friedrich Scheufele has a rich and varied track record. His six victories at the 24 Hours of Le Mans earned him the nickname “Monsieur Le Mans”. The dial of the Superfast 8 Hz Power Control Porsche 919 Only Watch 2017 is midnight blue, the legendary colour of his racing helmet, and bears his signature, visible at 6 o’clock along his favourite number 20: the one painted on the Porsche 936 with which the champion won the 24 Hours of Le Mans in 1976. 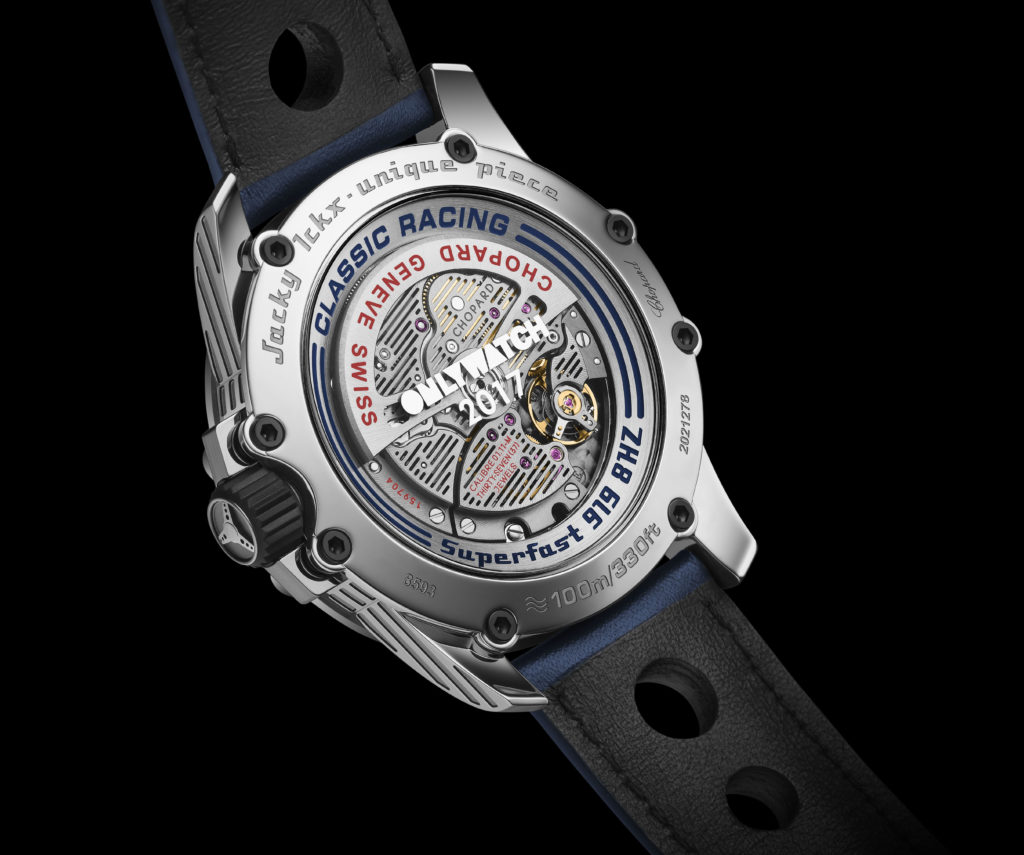 The Superfast 8 Hz Power Control Porsche 919 Only Watch 2017 is powered by a Manufacture movement: Calibre 01.11-M, visible through a sapphire crystal dial and delivering a 60-hour power reserve. It picks up the characteristic engine-type finishing of the Superfast collection with its openworked oscillating weight. The bridges are worked out like the air vents of a high-performance engine. This calibre operates at 8 Hz instead of the traditional 4 Hz. This particularly high frequency enables greater precision as well as faster running resumption in case of shocks or disturbances that are frequent in motorsports. Calibre 01.11-M is equipped with a silicon escapement. It is also an authentic chronometer certified by the COSC (Swiss Official Chronometer Testing Institute), a particularly rare achievement for an 8 Hz movement and which testifies to Chopard’s ongoing dedication to maintaining the most demanding levels of precision. 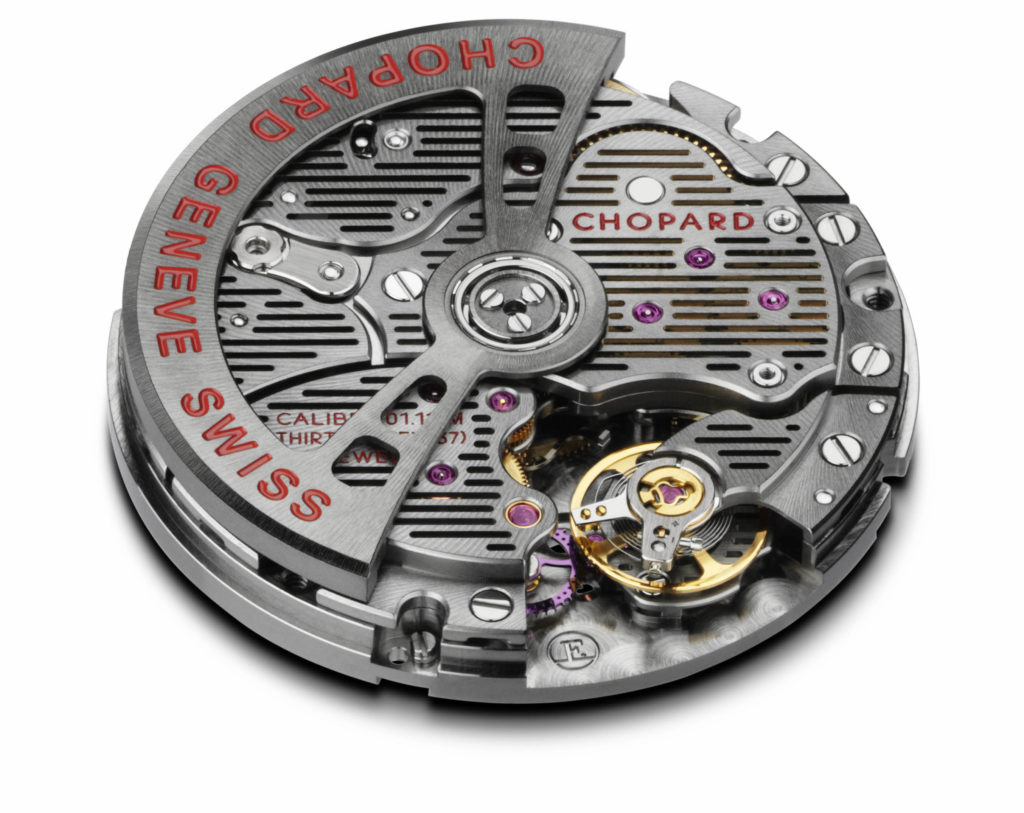