Since it appeared on the scene in 1950, this iconic model has been the source of a long line of Jaeger-LeCoultre mechanical watches equipped with an alarm. The Memovox Polaris model from 1968 has inspired the Grande Maison for its new Jaeger-LeCoultre Polaris collection, which revisits the look of its predecessor in a variety of watches and functions. 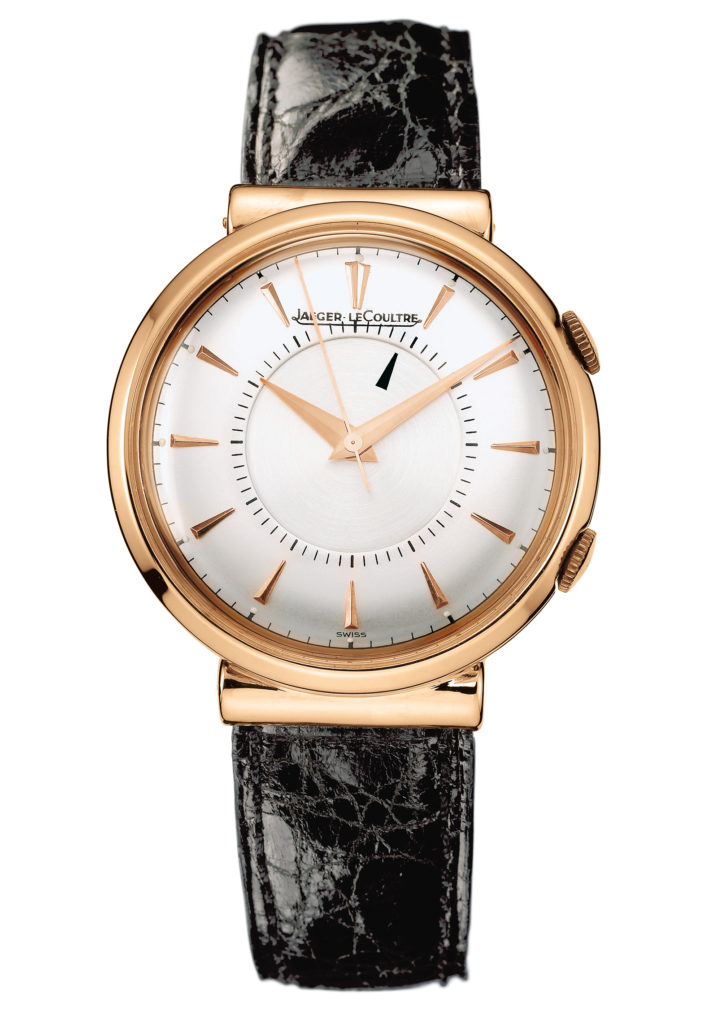 “Memovox reminds, notifies, and wakes up.” This is how an advertisement from 1950 highlighted the merits of the watch that Jaeger-LeCoultre had just commercialized. During the years of economic recovery following the Second World War, the Memovox – the Voice of Memory – was designed to help businessmen remember their meetings through its chiming function.

With very sober and classic lines, this manually wound mechanical watch set itself apart with an additional crown to control the alarm function. This is the watch that the Swiss authorities of the Canton of Vaud, where the Jaeger-LeCoultre Manufacture is located, selected as a gift for Charlie Chaplin in 1953. 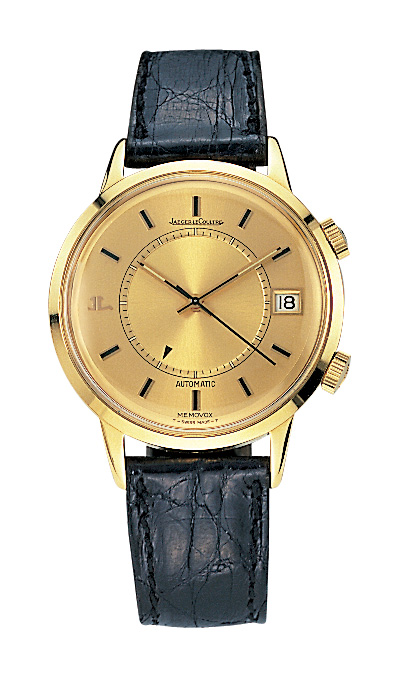 In 1956, Jaeger-LeCoultre enriched its Memovox line by developing the first automatic watch in the collection that incorporated an alarm function. This model has since inspired a long line of watches.

Three years after its creation, Jaeger-LeCoultre expanded the audience of its alarm watch. Once limited to businessmen, the Grande Maison saw that this watch with its automatic movement was ideal for adventurers and sportsmen of all types. For proof of this, look no further than an ad from the 1970s, showing the newly created Concorde with this dynamic slogan: “Memovox, for the man of action.”

To celebrate its 125th anniversary, the Grande Maison created two new models in honor of the Manufacture’s jubilee. The Memovox Worldtime shows the time across the world in the blink of an eye. As for the Memovox Parking, it monitors the parking meter and informs you when the meter is out. Someone had to think of it!

In 1959, Jaeger-LeCoultre revealed its Memovox Deep Sea, equipped with the automatic Caliber 815. It was the world’s first diving watch that was equipped with an alarm. On this watch, the alarm no longer served as a wake-up call or to provide a reminder of an important meeting; rather, its purpose was to ensure the safety of divers.

A brief six years later, the Memovox Polaris appeared, fitted with the Jaeger-LeCoultre Caliber 825. The idea for the Memovox Polaris was born in 1962, during deep sea exploration. At the time, the world was fascinated with all kinds of exploration, whether it was space, the great depths of the sea, or the poles.

In 1963, a pre-series of 50 pieces was launched. The new case boasted a more generous 42 mm diameter, quite sizable for the era, so as to make it easier to read the time.

Another important development concerned the striking mechanism. The creators of the Memovox Polaris took great pains to find a system that would make it possible for the alarm to ring loudly under water. To prevent the chime from being muffled by the fact that the watch could be in contact with a diver’s wetsuit, a triple case-back was developed. A first case-back, in bronze, made the alarm resonate. A water-resistant case-back protected the mechanism from contact with water. Finally, a third case-back with 16 openings made it possible for the sound of the alarm to be heard properly under water.

Water-resistant to 200 meters, this Memovox was resistant to both shocks and magnetism. It was also equipped with a rotating bezel that was no longer external but rather internal, controlled by a third crown.

In 1968, Jaeger-LeCoultre designed a new, more sporty dial for this watch. Its numerals were transferred and coated with Tritium®, just like the hour makers, redesigned in a trapezoid shape, and the small triangle indicating the time of the alarm. The hands were baton-shaped and also covered with luminescent material.

In 2018, fifty years on, this design has inspired the artisans of the Grande Maison in the creation of a new collection, Jaeger-LeCoultre Polaris.

In 1971, a new, more advanced version appeared. Called the Memovox Polaris II, it boasted all the latest technological advances. Its Caliber 916 is part of the generation of high-frequency automatic movements developed by Jaeger-LeCoultre starting in 1970. With its balance wheel beating at a rate of 28,800 vibrations per hour, the watch reached a new standard of precision. The winding system was also innovative, with a weight capable of turning freely in either direction around its axis to wind the barrel. The caliber proved so effective that it inspired the current Caliber 956 that powers the Master Compressor Memovox.

In 1998, the Master Control Memovox was introduced. Driven by Caliber 914, this watch boasted performance and reliability certified by one thousand hours of testing.

The year 2002 was highlighted by the appearance of the Master Compressor Memovox, representing a crowning achievement in the ongoing success story of the Memovox movement.

In tribute to the impressive career of the Memovox Polaris, Jaeger-LeCoultre presented two Memovox Tribute to Polaris limited series in 2008: the “1965” and the “1968” models.

While both these Memovox Tribute to Polaris watches remained totally loyal to the spirit and the aesthetic of their forerunners, they were endowed with the latest Jaeger-LeCoultre technical innovations in order to meet modern standards in terms of precision, sturdiness and reliability. Jaeger-LeCoultre Caliber 956 therefore houses a striking mechanism composed of a gong suspended from the case-back. Moreover, its oscillating weight is equipped with ceramic ball bearings requiring no lubrication and no maintenance.

The case is fitted with a water-resistant case-back maintaining its role as a resonance chamber, and an external case-back featuring 16 round openings in keeping with the original aesthetic. 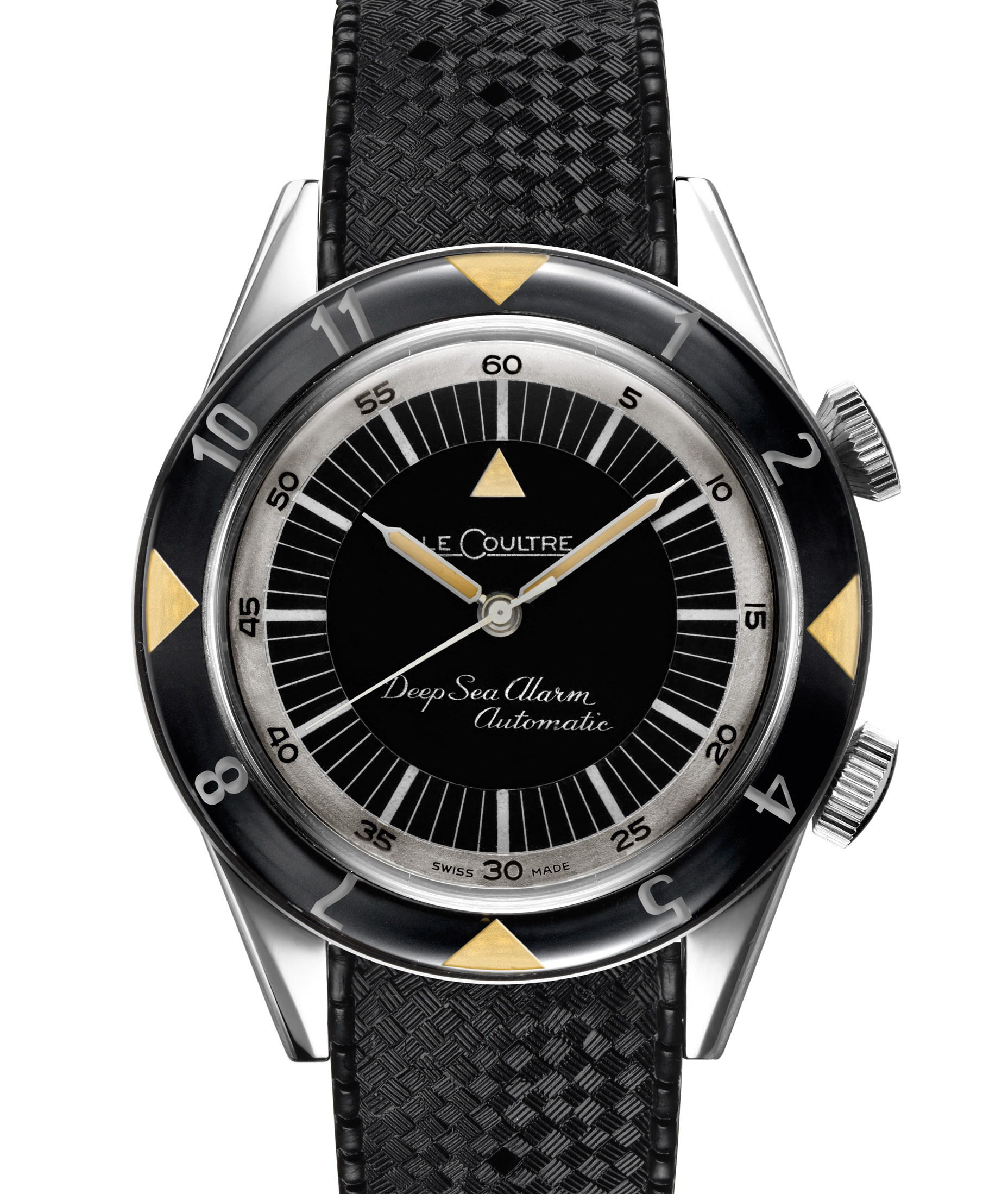 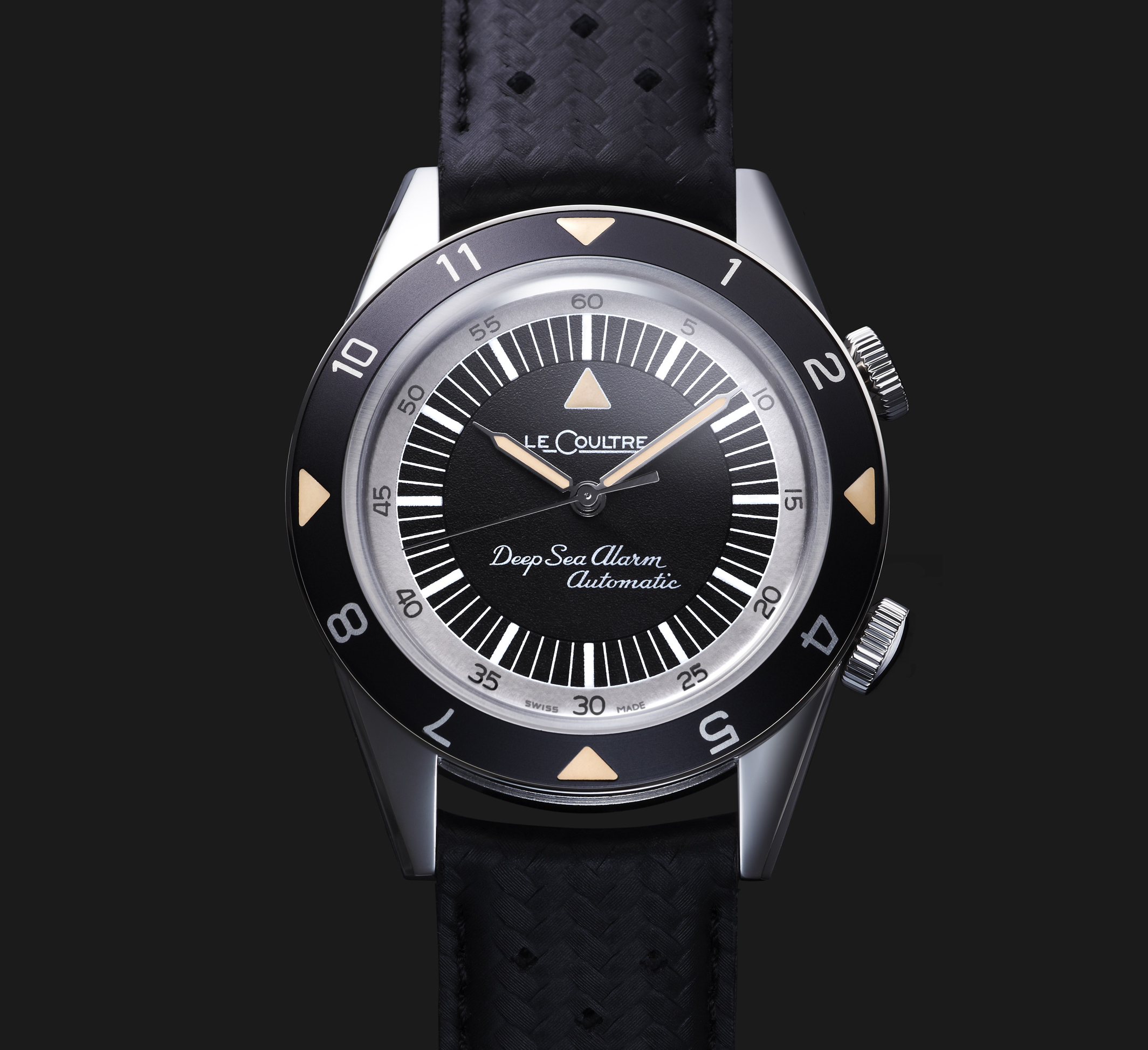 In 1959, Jaeger-LeCoultre had presented its very first underwater watch equipped with an alarm, the Memovox Deep Sea – of which there were two versions: one intended for European divers, and the other for their American counterparts. In 2011, the Manufacture paid tribute to this historical model with a limited series re-edition. As with the original, it comes in European and US versions. Equipped with a 40.5 mm diameter steel case and powered by automatic Memovox Caliber 956, the European version (in a series of 959 pieces) is distinguished by its black dial, while the American version (in a series of 359 pieces) features a black/gray dial bearing the “LeCoultre” signature. 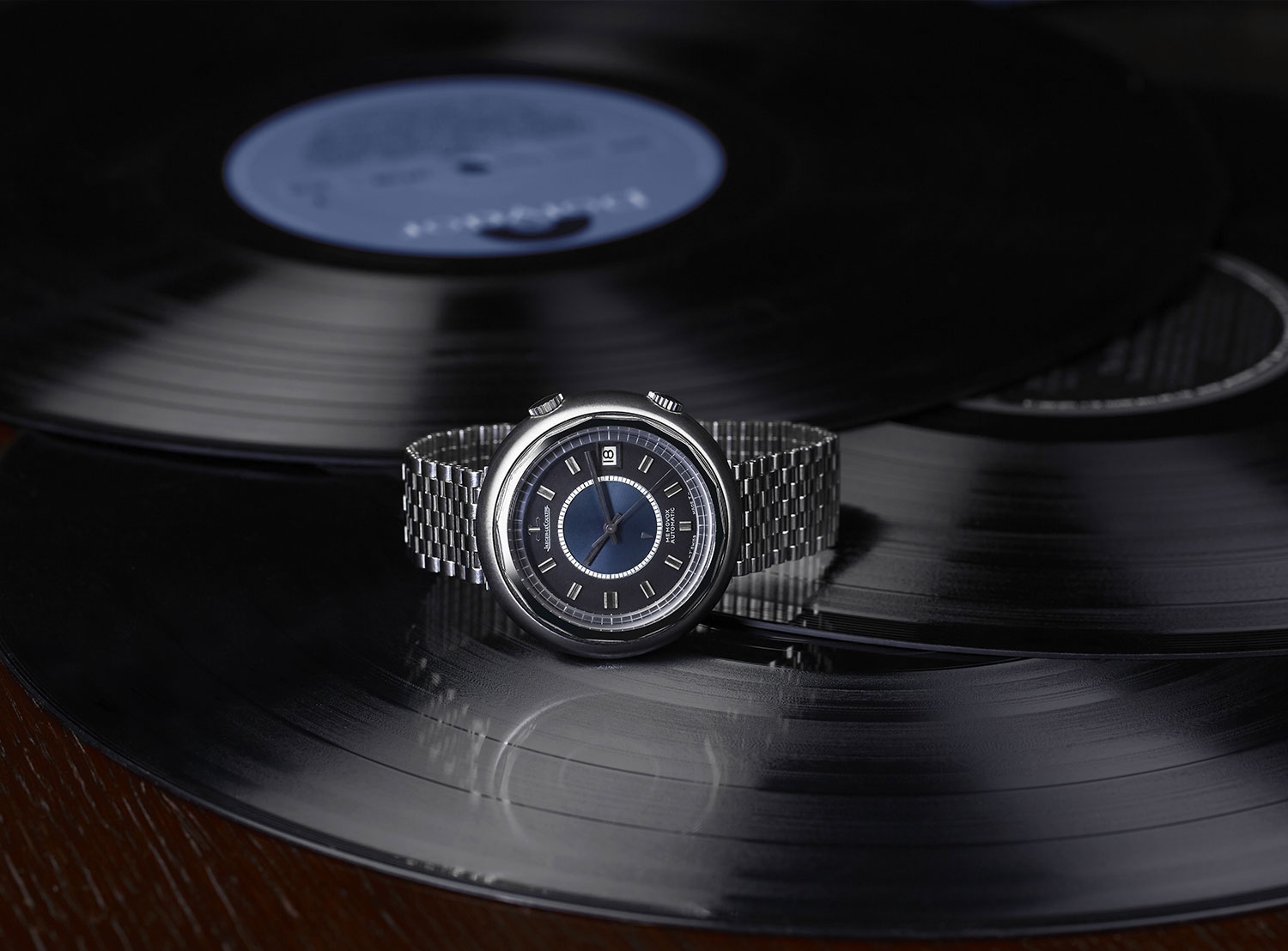 In 2016, to celebrate the 60th anniversary of its alarm watch with an automatic movement, Jaeger-LeCoultre marked the occasion with an exclusive limited edition model available only in its boutiques. Drawing inspiration from the 1970s Memovox “Snowdrop” model, this blue, vintage-style watch is presented with a very contemporary case and finishes while housing the Jaeger-LeCoultre Caliber 956. 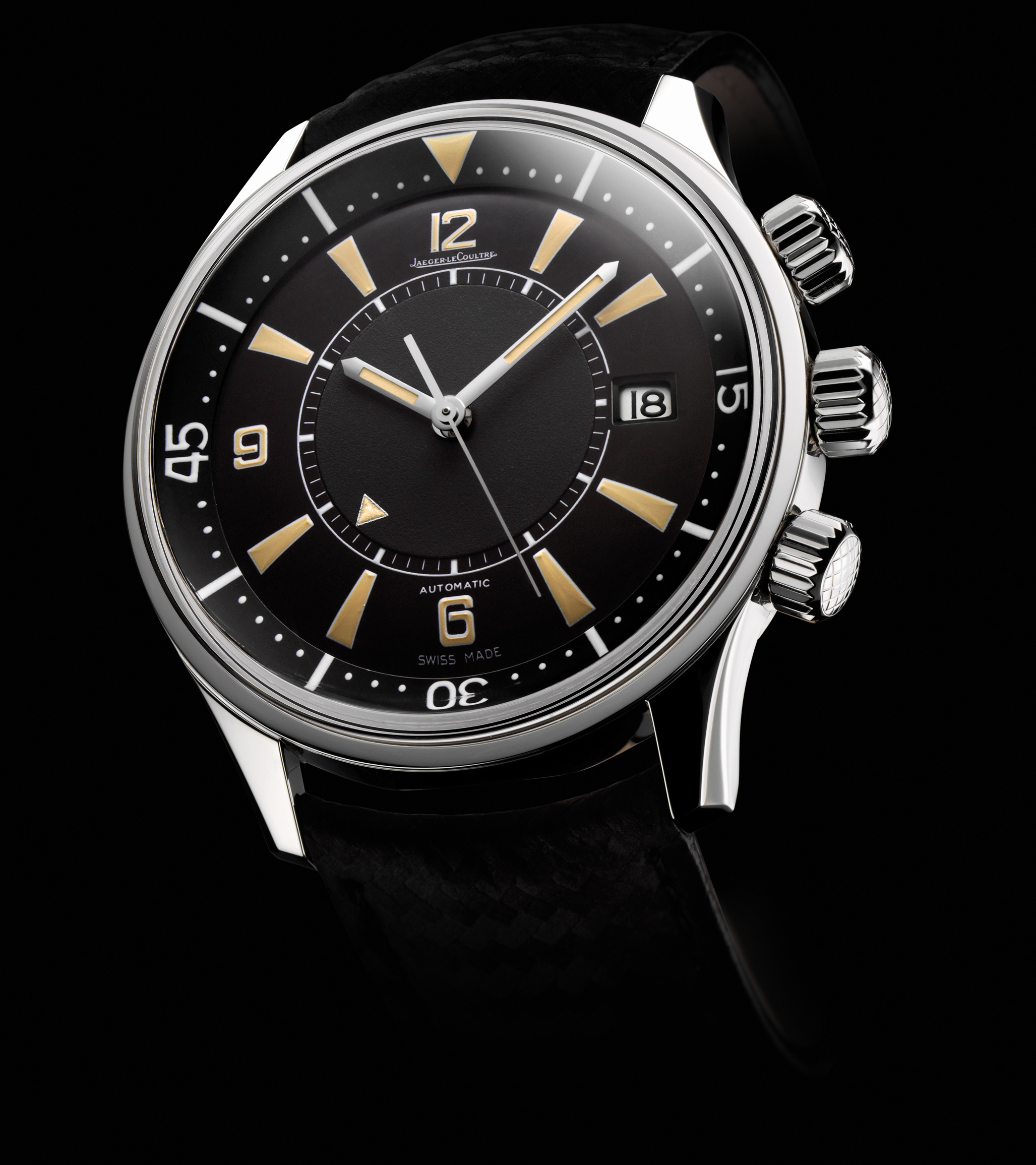 In 2018, the Grande Maison is unveiling its new Jaeger-LeCoultre Polaris line, the design of which was inspired by the Memovox Polaris from 1968.

In this collection, the Jaeger-LeCoultre Polaris Memovox adopts the look and alarm function of the original model, with a redesigned case. It celebrates the 50th anniversary of the 1968 model and is available in a limited series of 1,000 pieces, sure to delight lovers of exclusive objects imbued with history.

From 1950 to today, very few watch movements can boast such longevity, thanks to its initial reliability and successive improvements. In 2018, over sixty years after it first appeared, the Memovox continues to ring with the times.