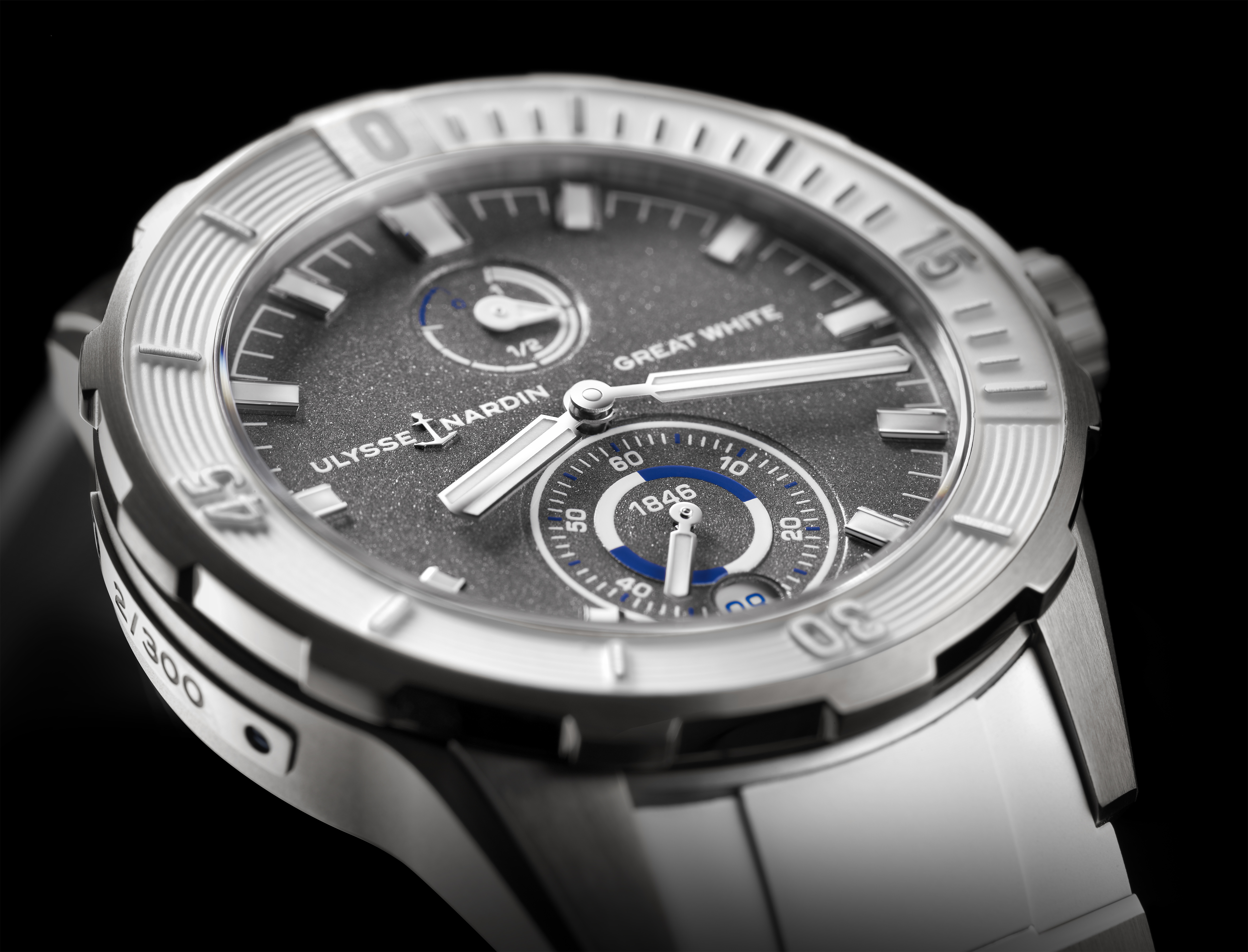 The tide has come rushing in at the Monaco Yacht Show, bringing with it four brash new models in Ulysse Nardin’s Diver Chronometer collection. 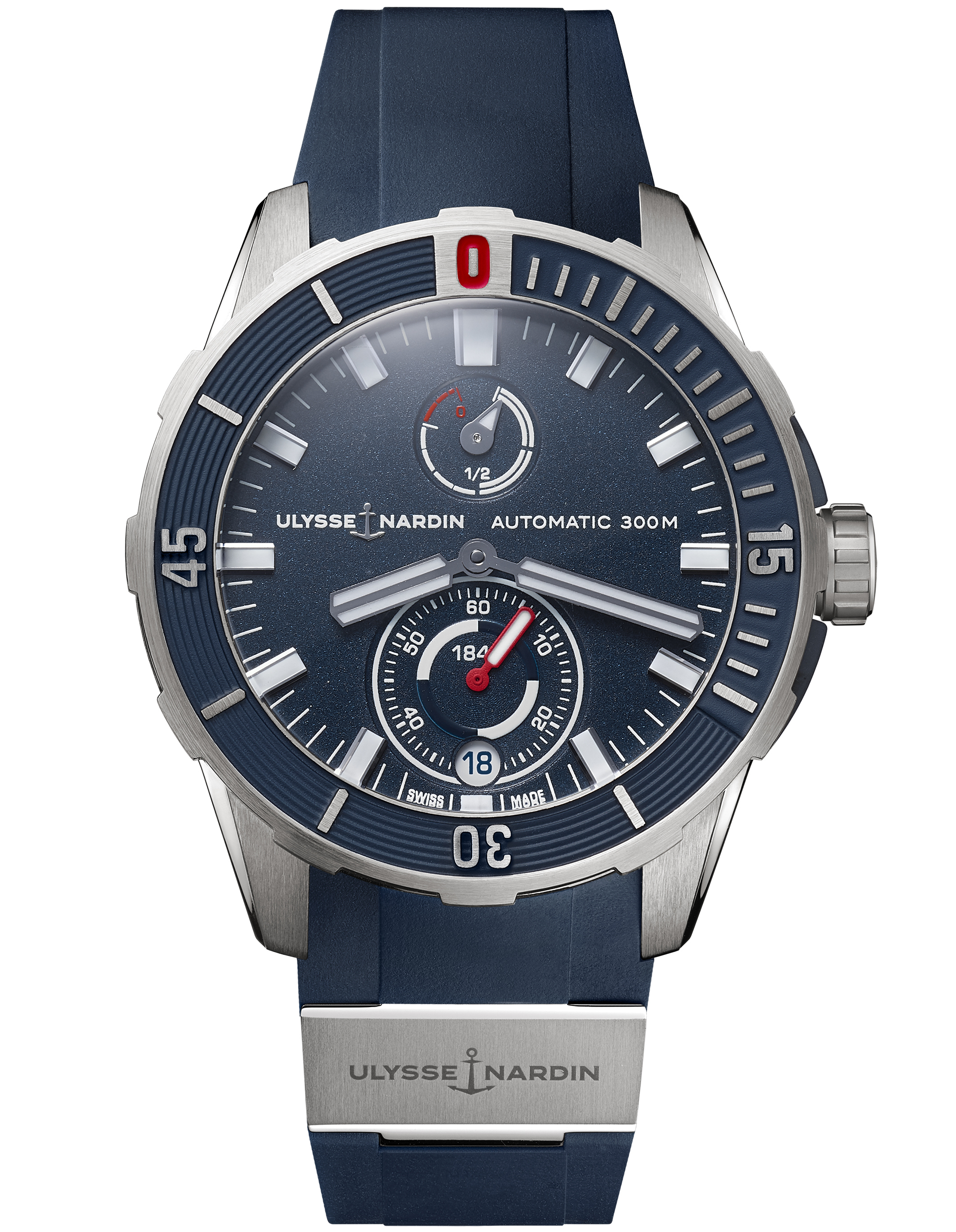 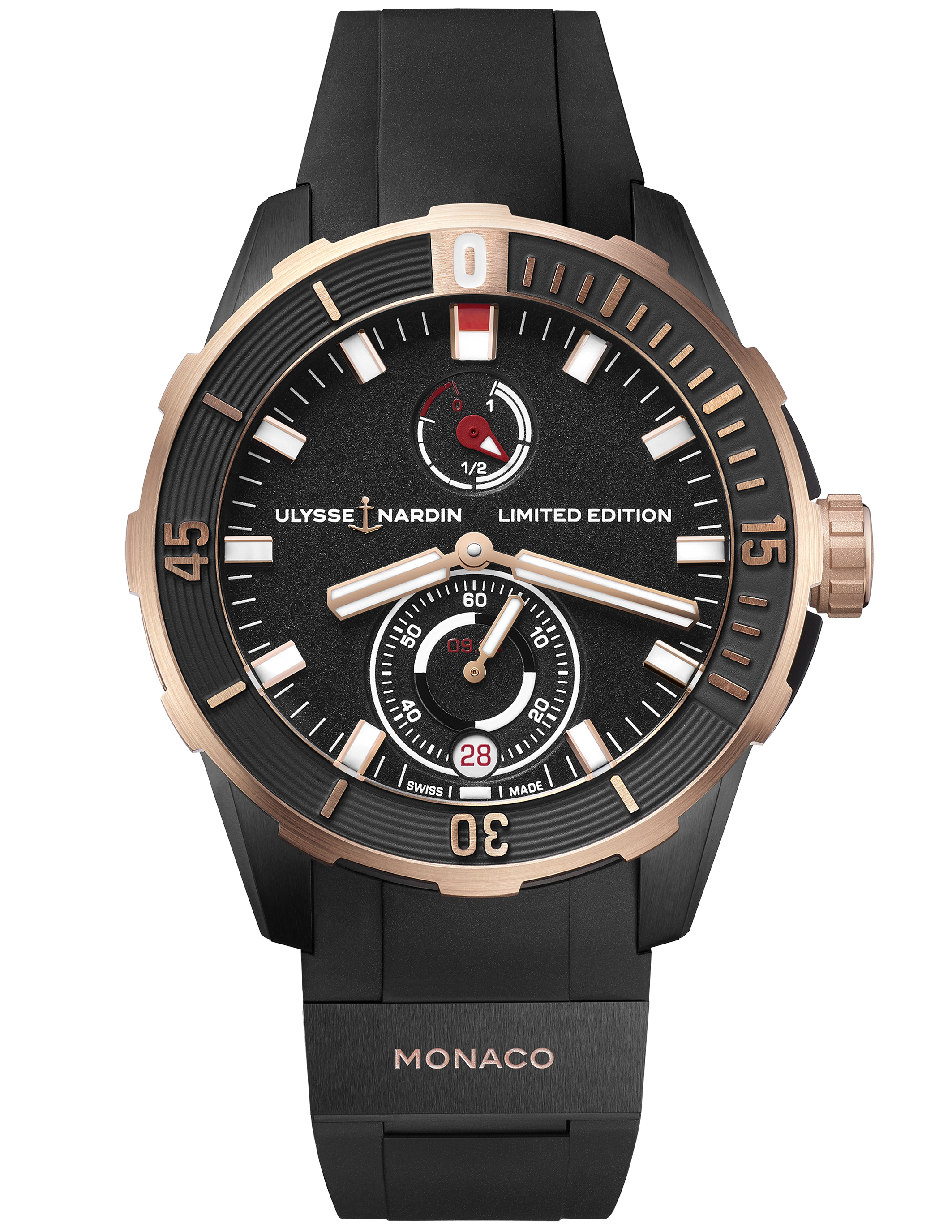 Already a favorite among free spirits, the Diver has a new, contemporary and eye-catching appearance both outside and in. In addition to the deep blue and all-black versions, this fresh line includes the Diver Great White and a Monaco Limited Edition. These robust, elegant timepieces will be presented by our own armada of modern-day Ulysses at the 2018 Monaco Yacht Show, marking the beginning of the countdown to an exhilarating new adventure in diving watches. 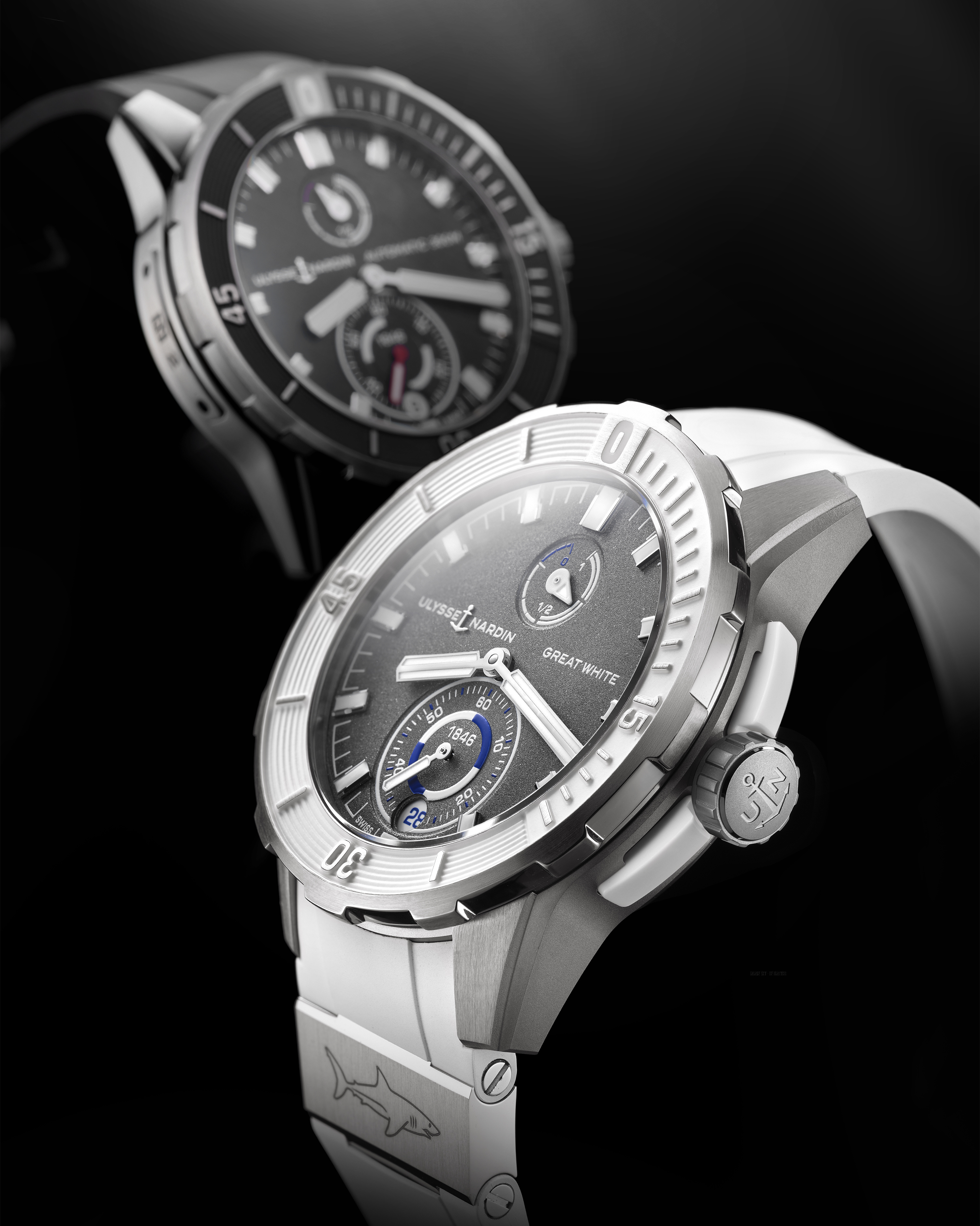 A supernova among mere stars, the new Diver Chronometer redefines functional elegance with its audacious design. A diving watch crafted to withstand up to three hundred meters of potentially deadly water pressure, its inverted, concave bezel with domed sapphire glass is a breakthrough in exquisite watchmaking.

The face heralds the mechanical marvel of the UN-118 movement with its silicium technology – a specialty of the Manufacture – within its 44 mm case, visible through the open back. Superluminova on the indexes and hands makes the hours and minutes visible not only in the dark of night but also at great depths. The face is adorned with a power reserve indicator at 12 o’clock and a date and small seconds at 6 o’clock, all nestled within the unidirectional rotating bezel.

The numbers on the face have been redrawn to read 0-15-30-45. Even the rubber and titanium strap of the Diver has been cleverly reworked with the clasp replaced by a pin buckle and streamlined with just one easily identifiable Ulysse Nardin signature “element”.  Sturdy, blue rubber guards protect the crown. 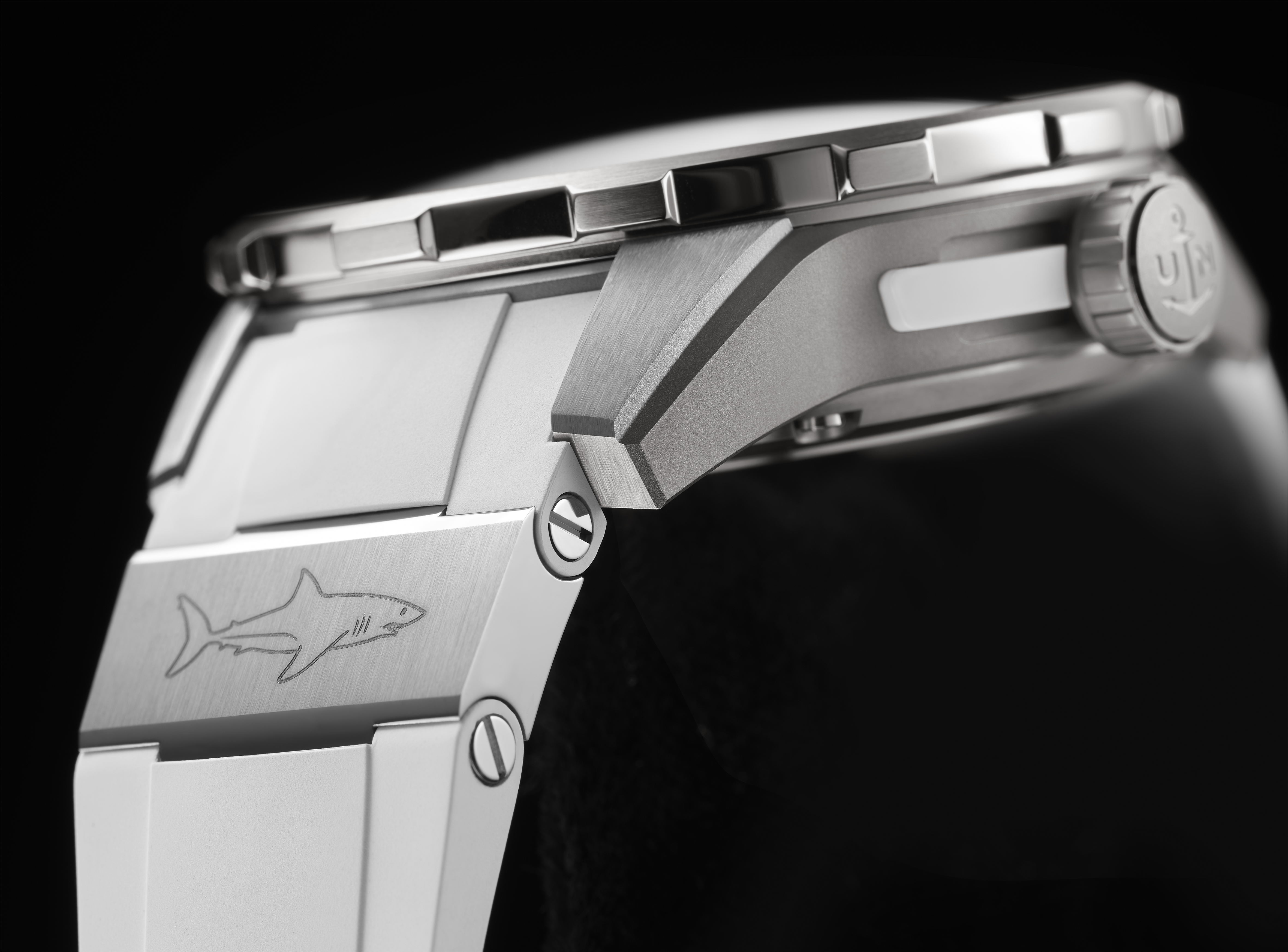 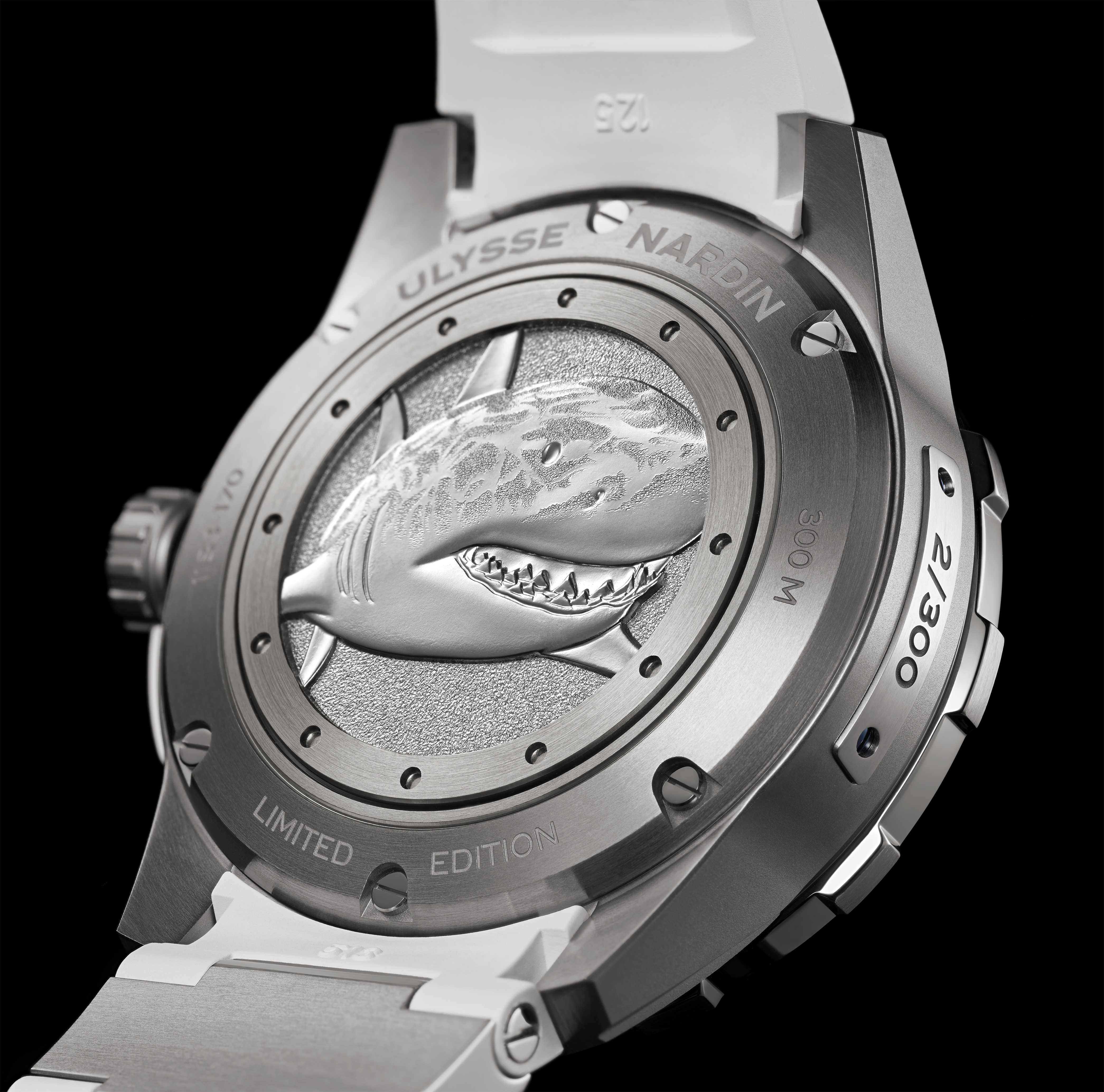 Free diver and Ulysse Nardin ambassador Fred Buyle explains why Ulysse Nardin is a key partner on his expeditions. “The main advantage of freediving is that we don’t have a lot of gear. I basically only travel with a wetsuit, dive watch, a pair of fins, a mask, and of course my photo equipment. A dive watch is the most crucial accessory for a free diver. When you’re freediving, you have a special relationship to time—sometimes it passes fast and other times it seems to slow down or even stop. Your watch almost becomes a friend, so I am always wearing my Ulysse Nardin Diver timepieces. I rely on my watch to monitor my perception of time. An automatic watch is key as it gives you the peace of mind that you won’t run out of battery in the middle of a remote expedition.”

Ulysse Nardin’s links to the sea run deep. A recognized pioneer of watchmaking innovation since 1846, the Manufacture’s early renown was built on the peerless precision and reliability of its marine chronometers – essential navigational instruments that helped seafarers determine longitude by means of celestial navigation. In continuing the development of its line of dive watches, Ulysse Nardin reaffirms its position of watchmaker of the oceans. 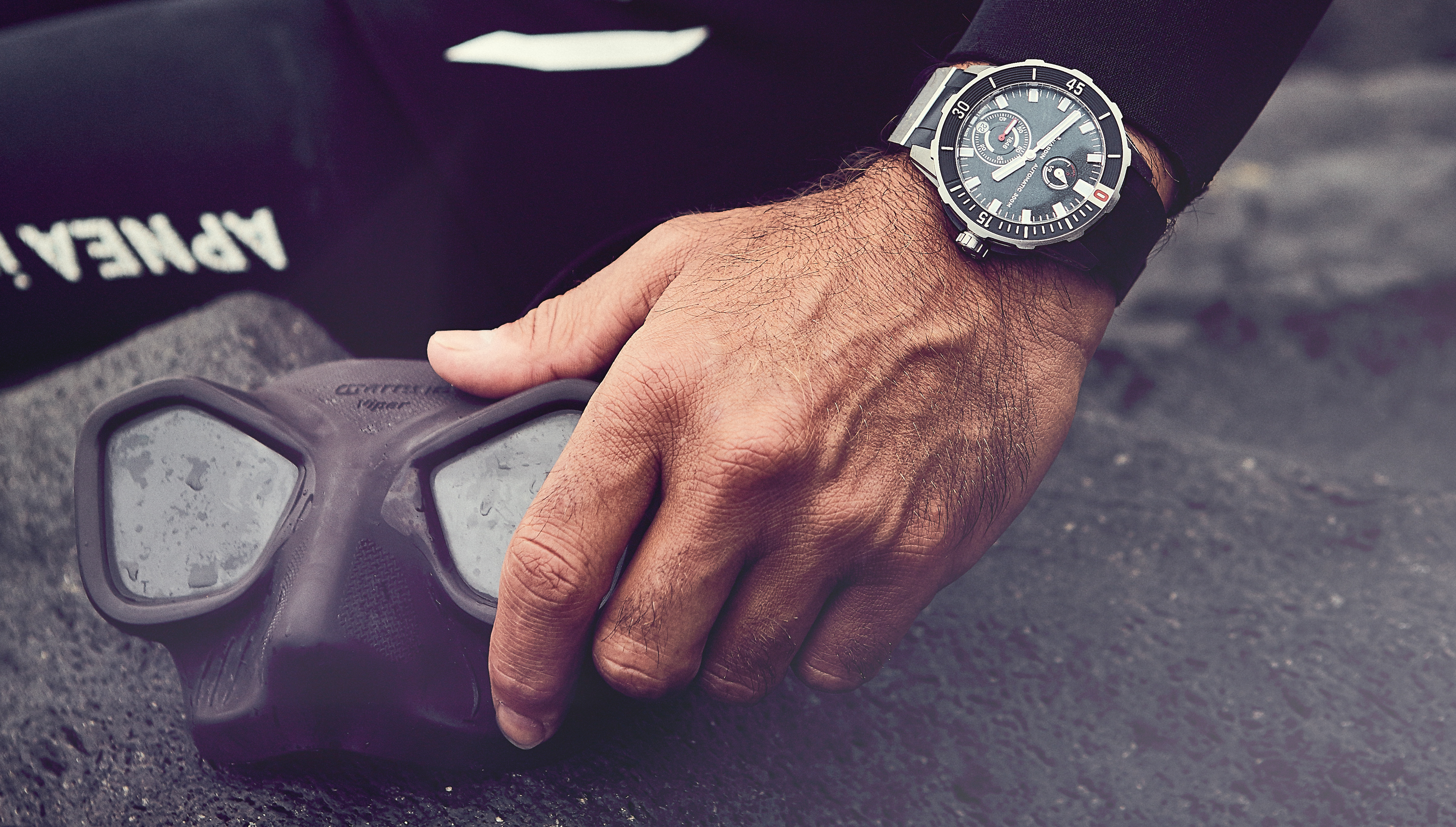 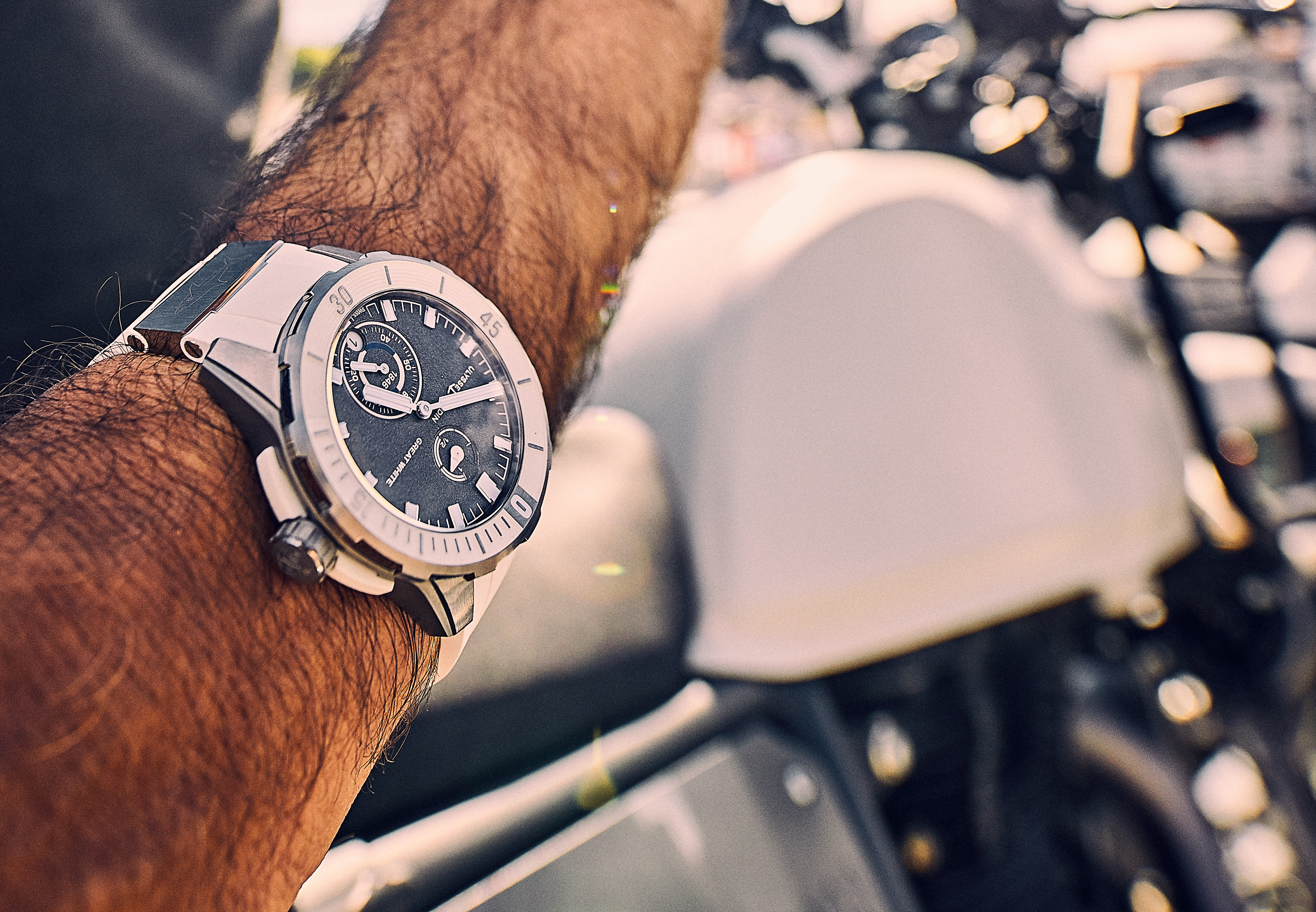 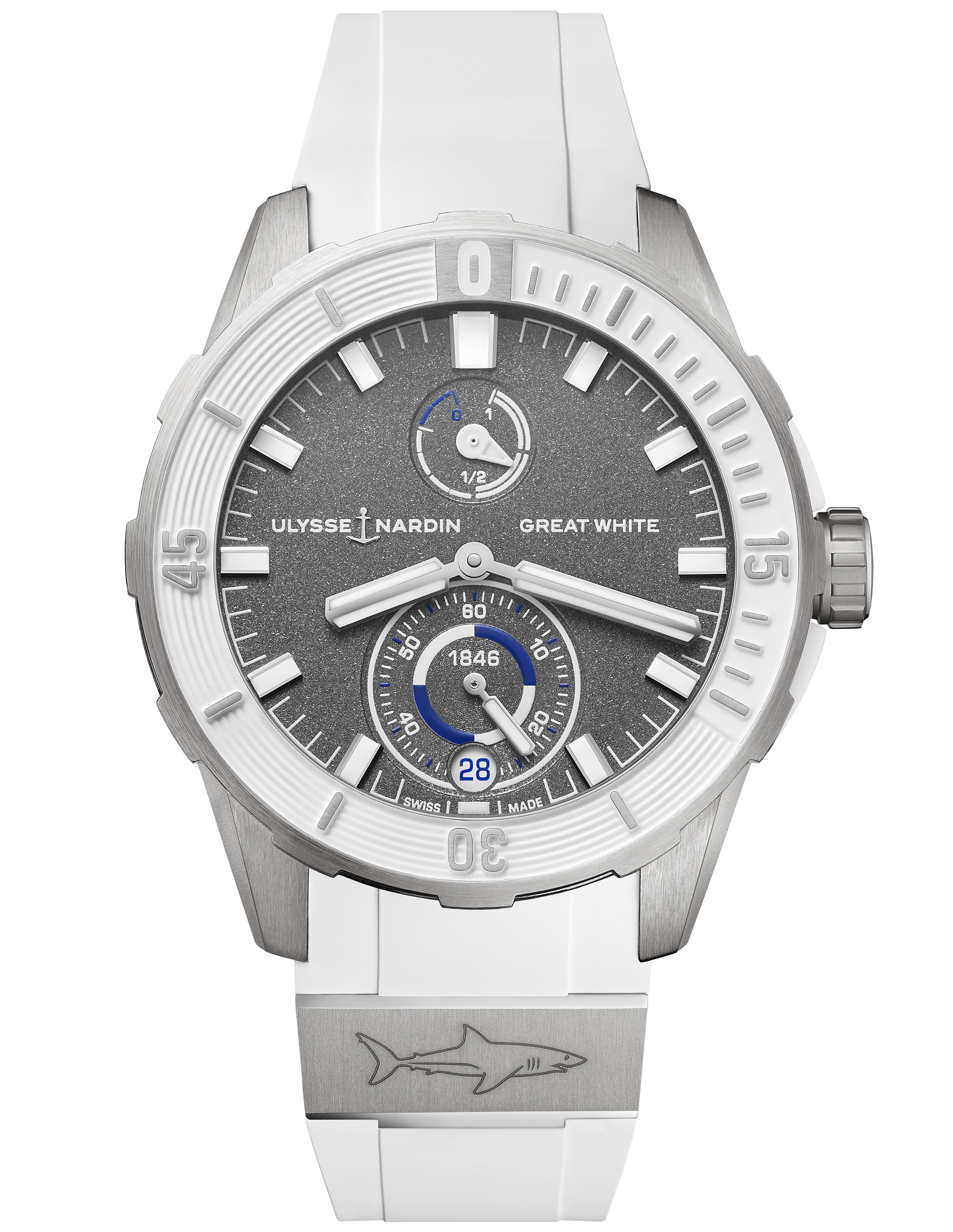 The Diver Great White, with a great white shark stamped on the case back, is emblematic of the Ulysse Nardin philosophy. King of the oceans, the shark represents stealth, strength and strategy and the Diver Great White embodies these qualities in contemporary adventurers of the land and sea. The Diver Great is a limited edition of 300 pieces. 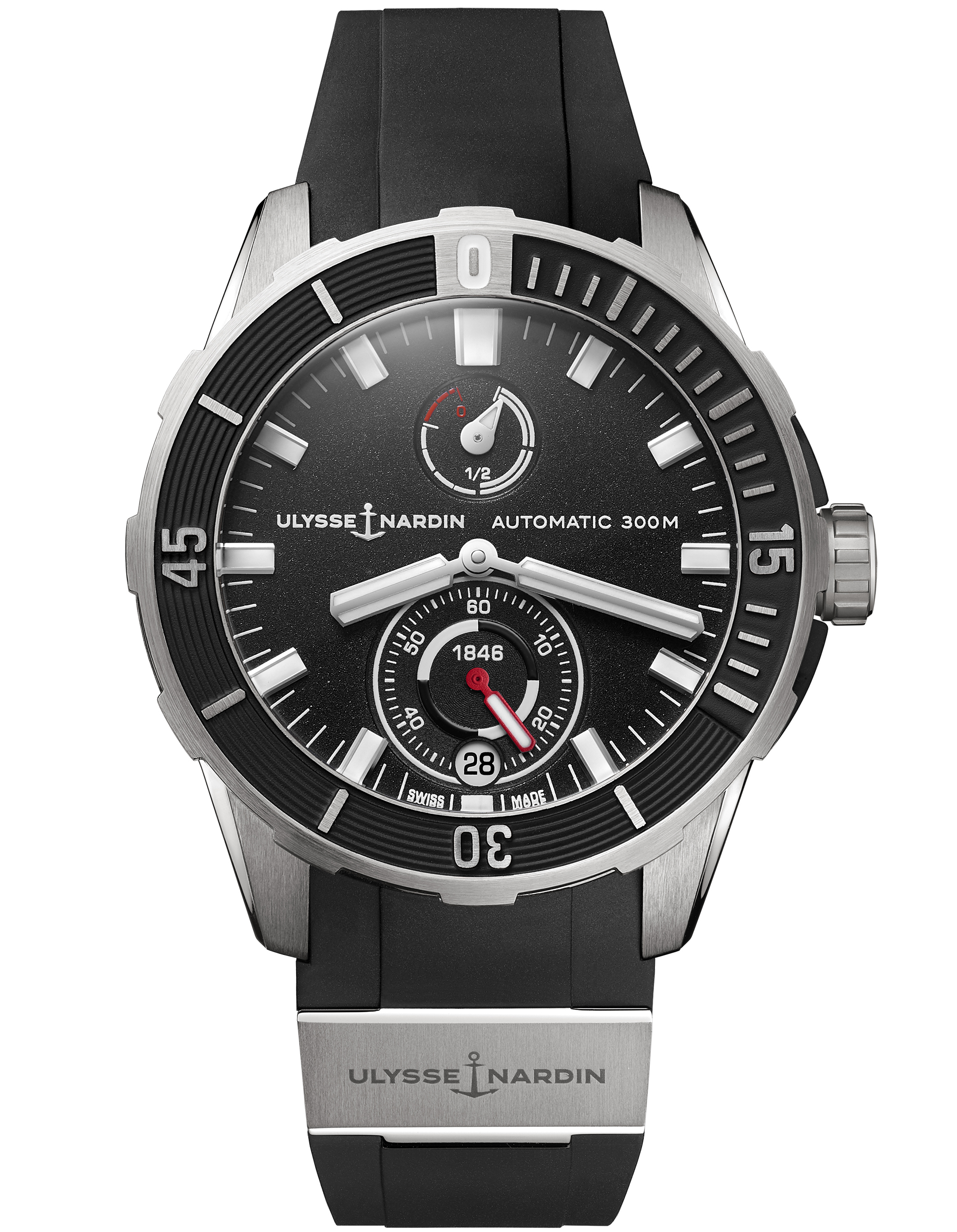 The instantly recognisable Monaco Limited Edition in this newly created design has an image of the Monegasque flag at 12 o’clock. The unique calendar disk has a specificity that corresponds directly to the Monaco Yacht Show; the numbers 26, 27, 28 and 29 in red mirror the dates of the 2018 event, held in the Principality’s Port Hercules on the French Riviera. The case back also discreetly bears the Monaco coat-of-arms. The Diver Monaco is a limited edition of 100 pieces.