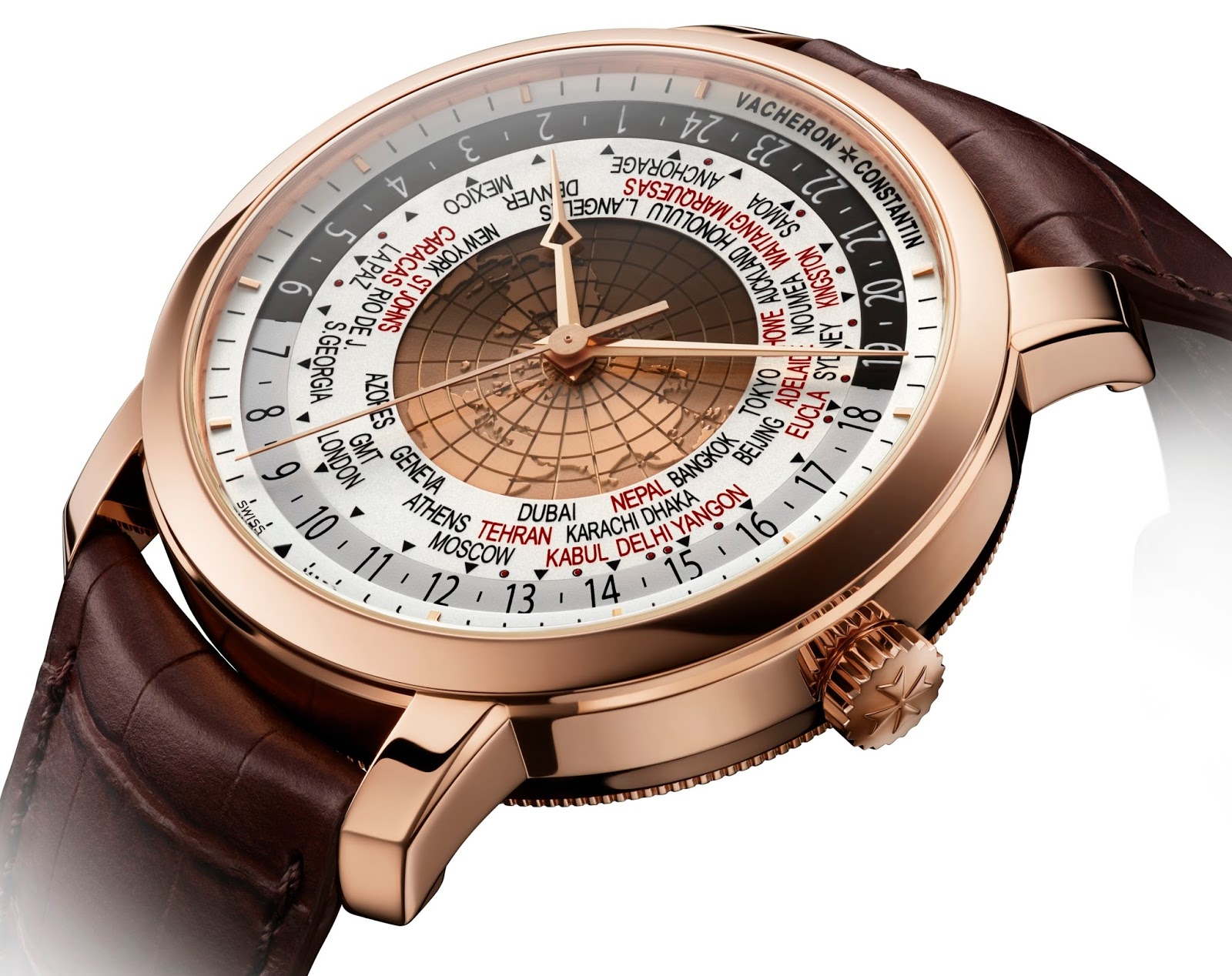 New World-Time watch by Vacheron Constantin from Traditionnelle collection. Slick and elegant timepiece with the eye-catching gold map in the center of a dial.

The Traditionnelle World Time by Vacheron Constantin highlight a complication inextricably bound to the history of the Geneva-based manufacturer: world time. The latter is also interwoven with the theme of travel, since Jean-Marc Vacheron and his successors have constantly circled the globe delivering their exceptional timepieces. A pioneer in the development and production of innovative watches, the Manufacture has displayed the same approach in being resolutely open to the world at large. Created in 1755 in Geneva and able to look back over 260 years of uninterrupted activity, Vacheron Constantin soon began exploring the four corners of the world. It established a presence in the United States in 1832 and in China in 1845 – well before the International Meridian Conference held in Washington in 1884 which divided the world into 24 time zones, taking the Greenwich meridian as the longitude 0 point of reference. This new approach became indispensable in keeping step with the development of international travel and of railways. 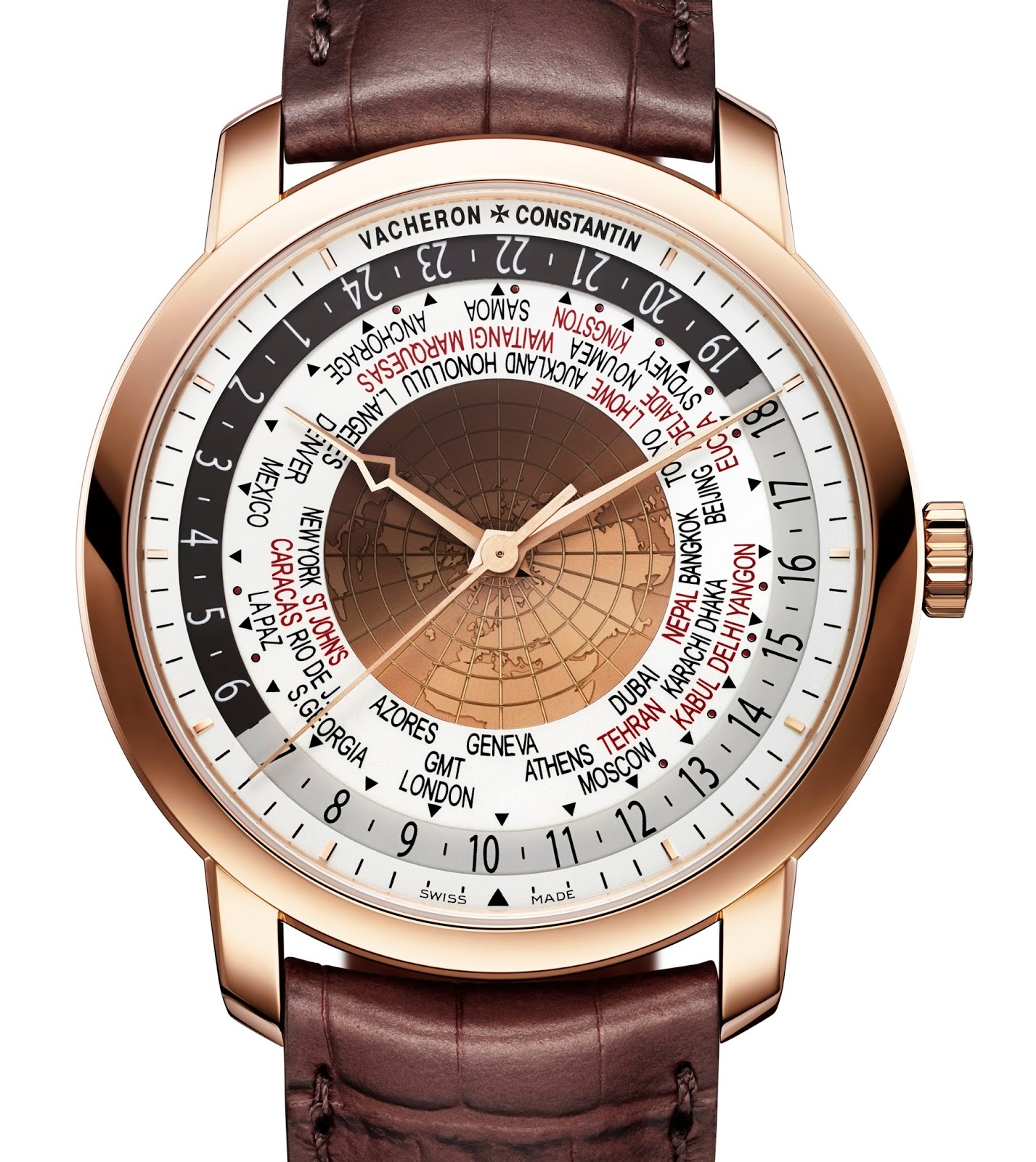 In keeping with the same pioneering spirit, and driven by a wish to demonstrate that the multiple time-zone watch could be further perfected, the Maison introduced its first timepieces endowed with an international time mechanism in 1932. This movement was the work of a brilliant Geneva watchmaker, Louis Cottier, who had imagined and developed a mechanical movement indicating the 24 time zones from 1 to 24 by means of a disc rotating around the central dial and the outer bezel bearing the names of the world’s major cities.
This first Vacheron Constantin world time “Cottier system” watch enabled simultaneous read-off of the time in 31 cities around the world. It marked the start of a rich and longstanding relationship with the world time complication. In 1936, the Maison presented two new versions of its world time model with a 31-city dial and a 30-city dial.
In 1937 and 1938, the Geneva-based Manufacture unveiled six table clocks with a mobile dial featuring 67 locations. From the 1940s onwards, Vacheron Constantin attributed the reference number 4414 to a world time model with a 41-city dial and a day-night division of the mobile 24-hour disc. During the 1940s and 1950s, many famous customers were captivated by this useful and ingenious mechanism, and contributed to spreading the fame of this new complication. In 1957, Vacheron Constantin wrote a new chapter in its history of world time watches by introducing the first world time wristwatch, reference 6213, ordered by an Egyptian dignitary. 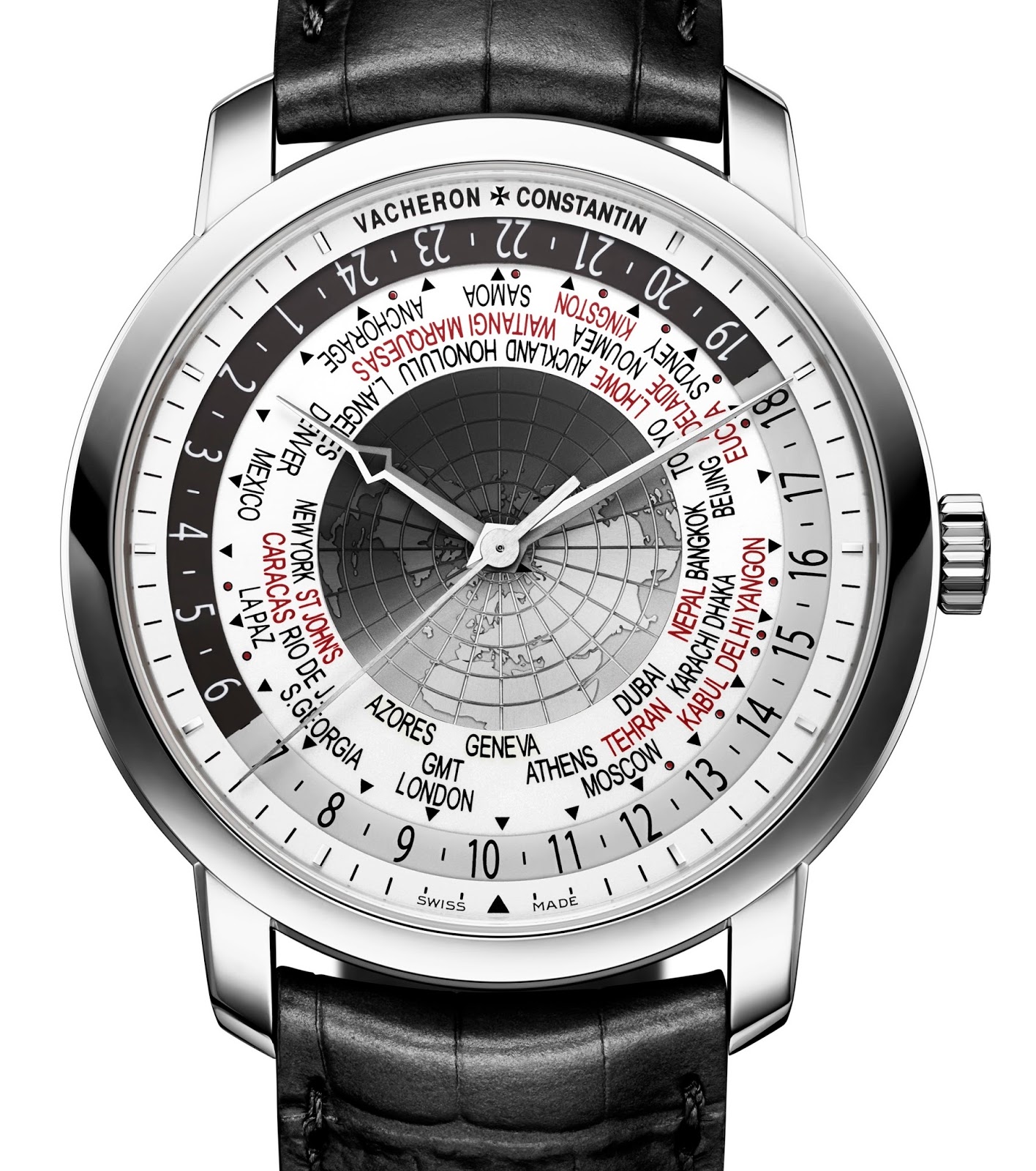 The indication of the 37 time zones as proposed by the Maison in its Traditionnelle World Time is as complete as one could wish for. The display consists of three dials: a sapphire dial with a day-night shading and the engraved and inked 24-hour indications (18:30 to 6:30 hours indications highlighted with an anthracite-colored background); a metal dial with painted cities names and a “Lambert projector” type gold map unveiling sun-brushed continents as well as sand-blasted seas; and a metal external ring with painted minute-track and applied gold hour-markers.
Beating at a frequency of 4 Hz (28,800 vibrations per hour) and endowed with a 40-hour power reserve, mechanical self-winding Calibre 2460 WT drives displays of the hours, minutes, center seconds and world time. It enables simultaneous read-off of the time in all regions of the world, along with the day-night indication provided above the central world map crafted in gold. All indications are adjusted via the crown, thus considerably simplifying the use of this highly technical watch. In light of these exclusive developments, the Vacheron Constantin Calibre 2460 WT – bearing the prestigious Hallmark of Geneva – own a patent featuring the indication of all the world’s 37 zone increments, the day-night indication and the setting of all functions by the crown. 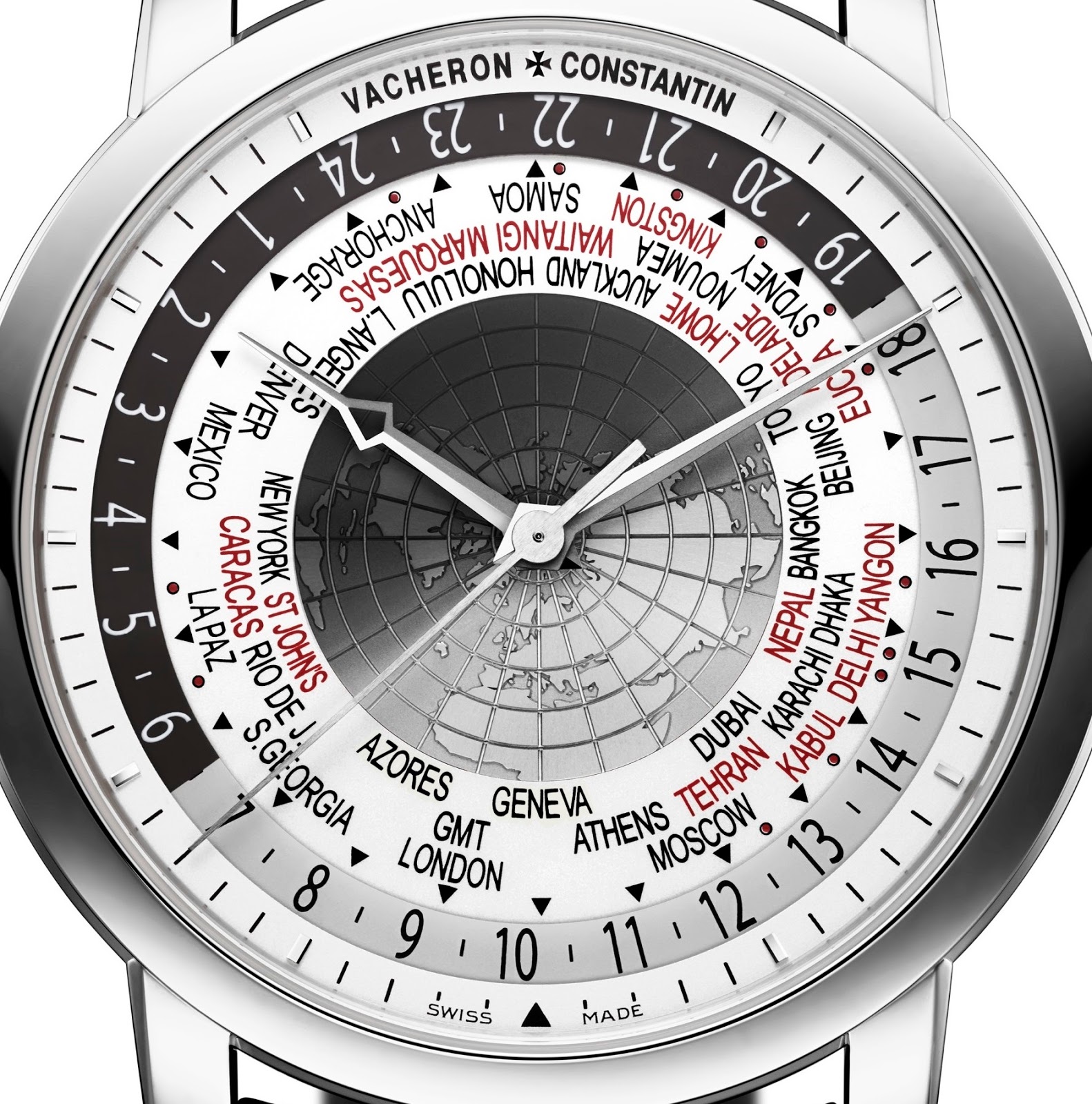 Despite its complex construction principles, the mechanical world time movement is extremely userfriendly. The wearer chooses the reference time and places it opposite the black triangle at 6 o’clock. The time in the reference location can then be read off either by the hour hand, or by the 24-hour disc, while the time in the other 36 time zones is simultaneously readable. The cities shown in black represent the full time zones, while the cities in red indicate half-hour or quarter-hour zones.
Incorporating all the signature characteristics of the collection – a slender bezel, a knurled motif on the back of the timepiece, a sapphire crystal caseback closed with screws, and dauphine-shaped hands – the Traditionnelle World Time comes with a 42.5 mm diameter 18K white gold or 18K 5N pink gold case that is fitted with a Mississippiensis alligator leather strap secured by a gold folding clasp. 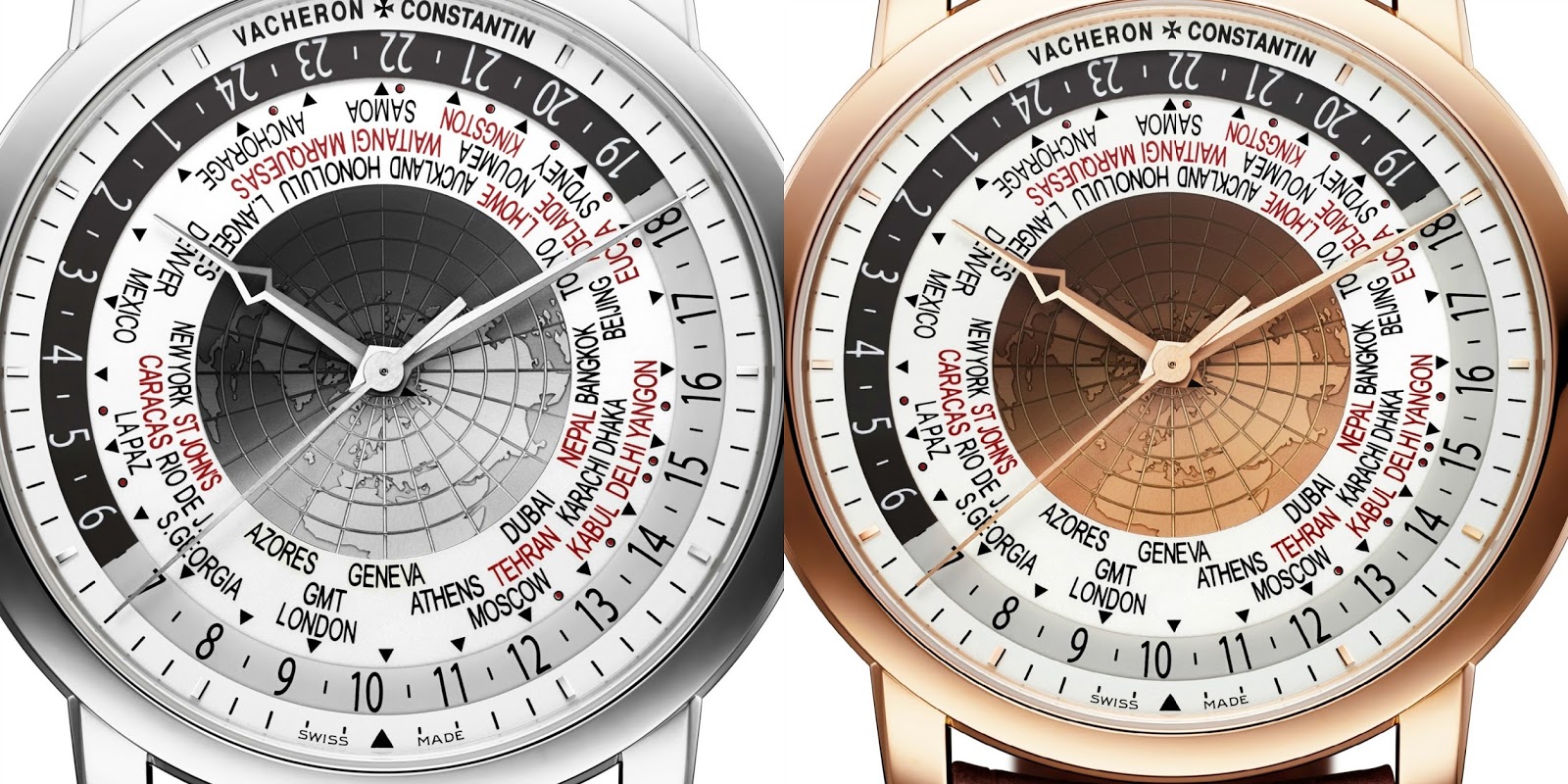 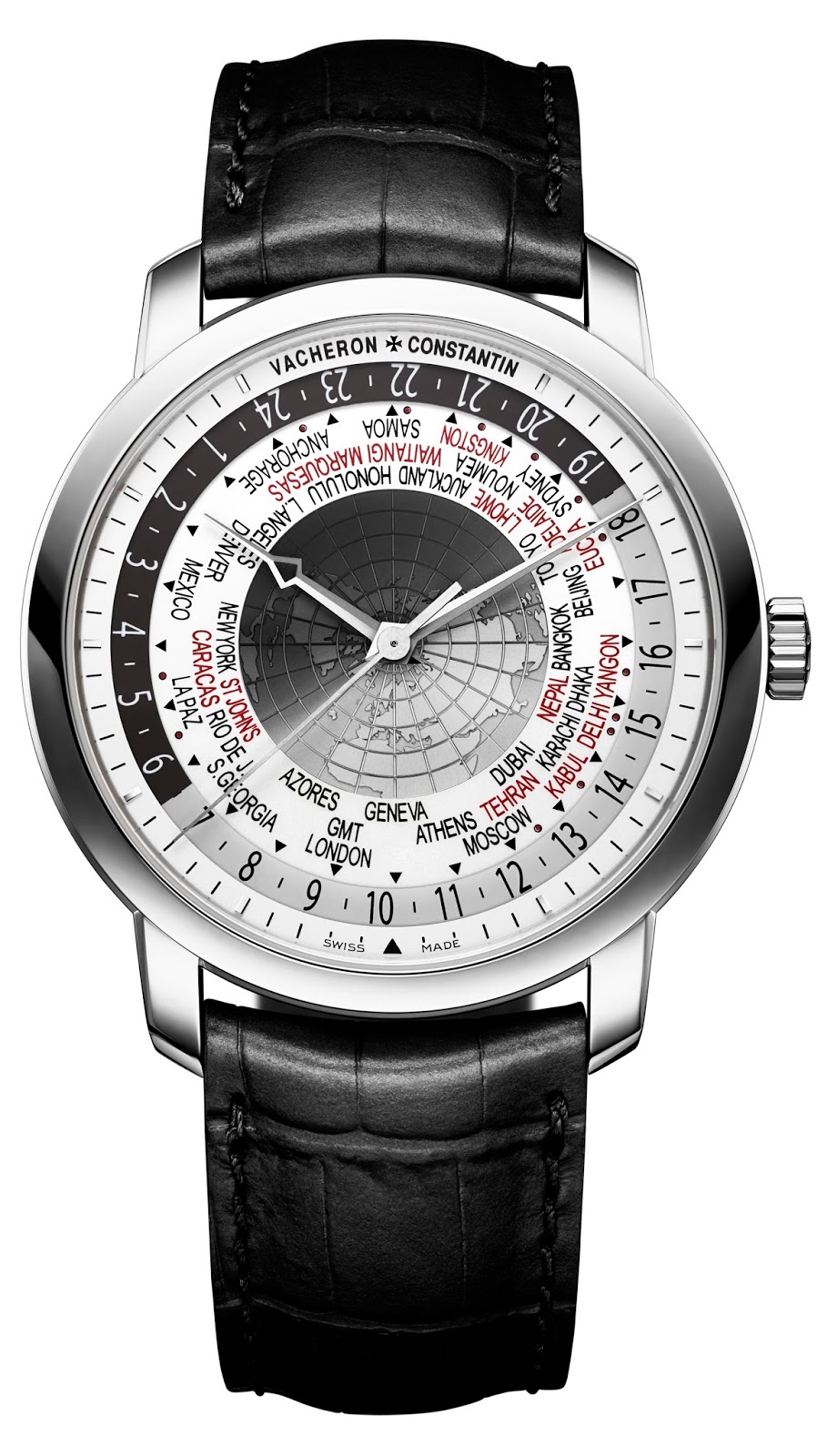 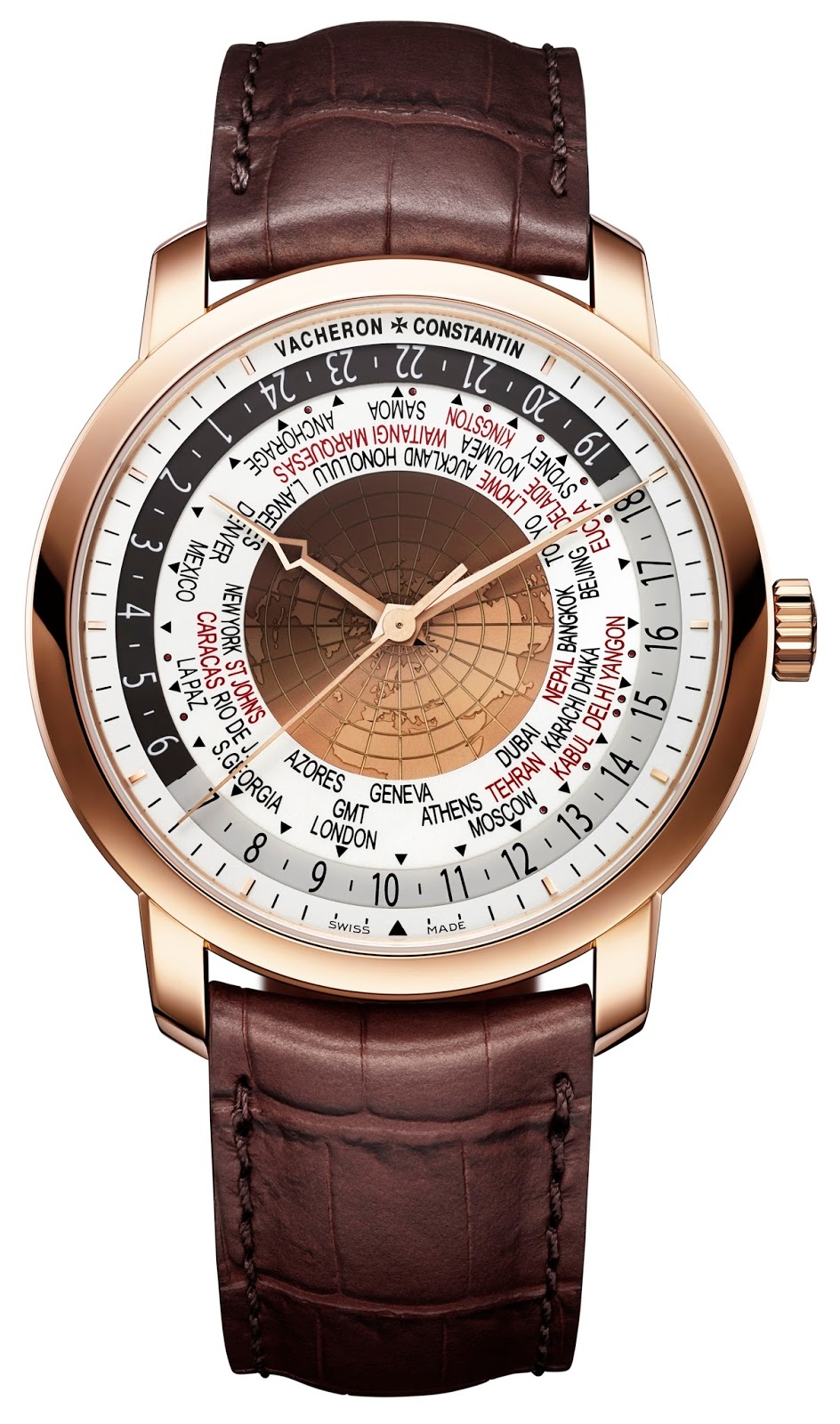