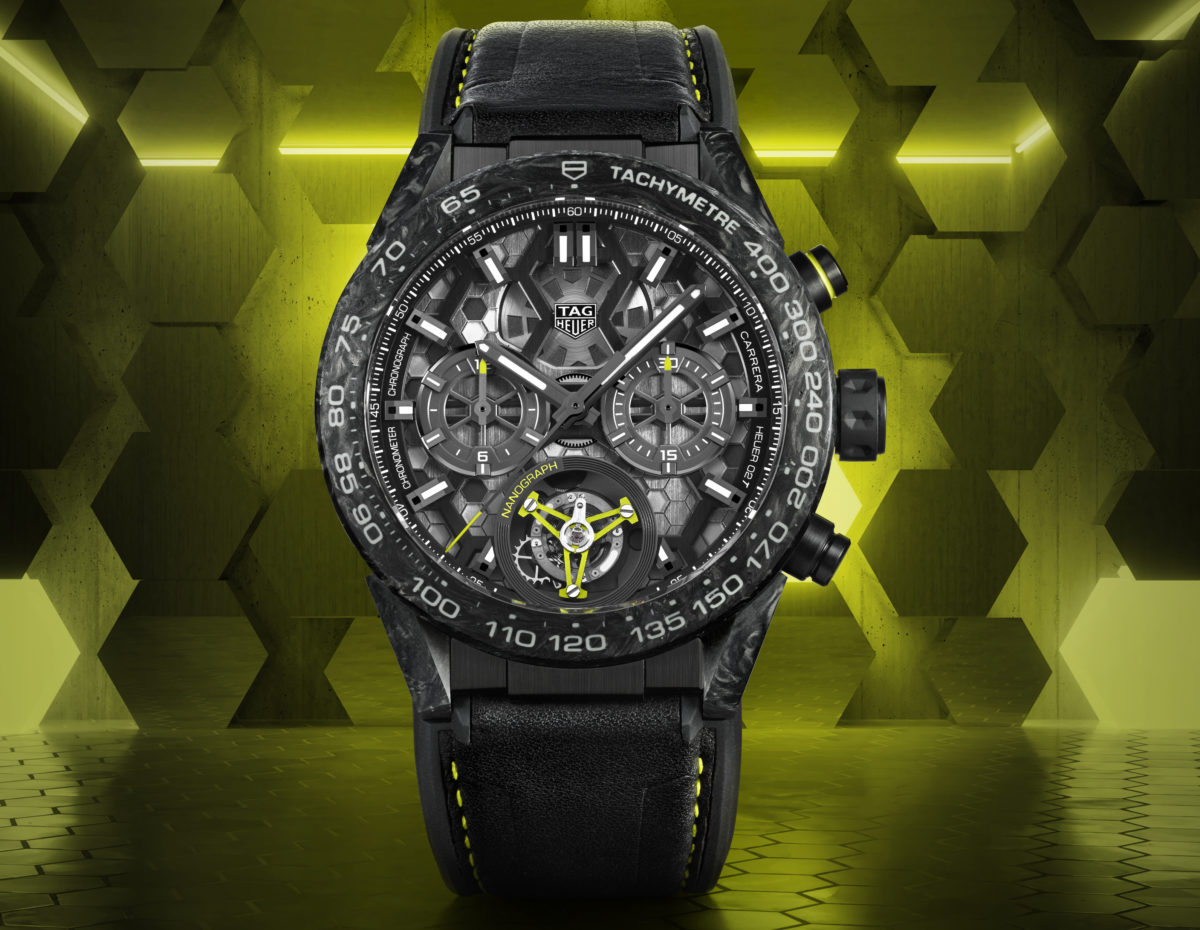 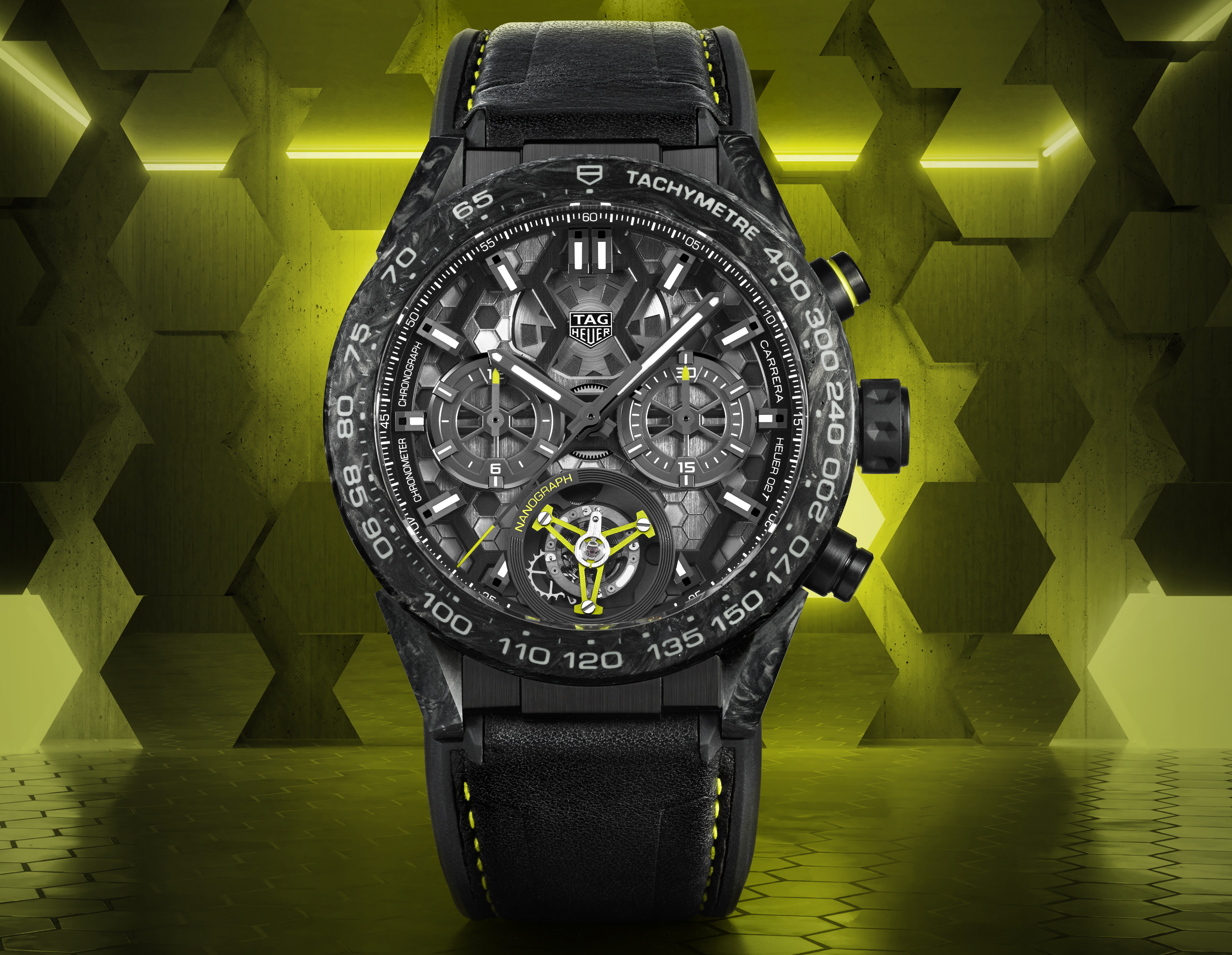 Combining watchmaking with scientific discovery, TAG Heuer introduces a state- of-the-art carbon hairspring in the latest interpretation of the Carrera.

During the Geneva watch fair, TAG Heuer unveiled its newest innovation, a world premiere in watchmaking: a hairspring made of a carbon composite invented, patented and produced by the avant-garde Swiss watchmaker. The new hairspring regulates the Heuer 02T manufacture movement, which is fitted with a tourbillon mechanism and meets the official standards for classification as a chronometer.

TAG Heuer demonstrates its watchmaking prowess with a truly amazing new timepiece representing the next generation of tourbillon watches. The manufacture movement of this new model features a carbon- composite hairspring, produced from a gas, that replaces the well-known Elinvar and silicon versions. 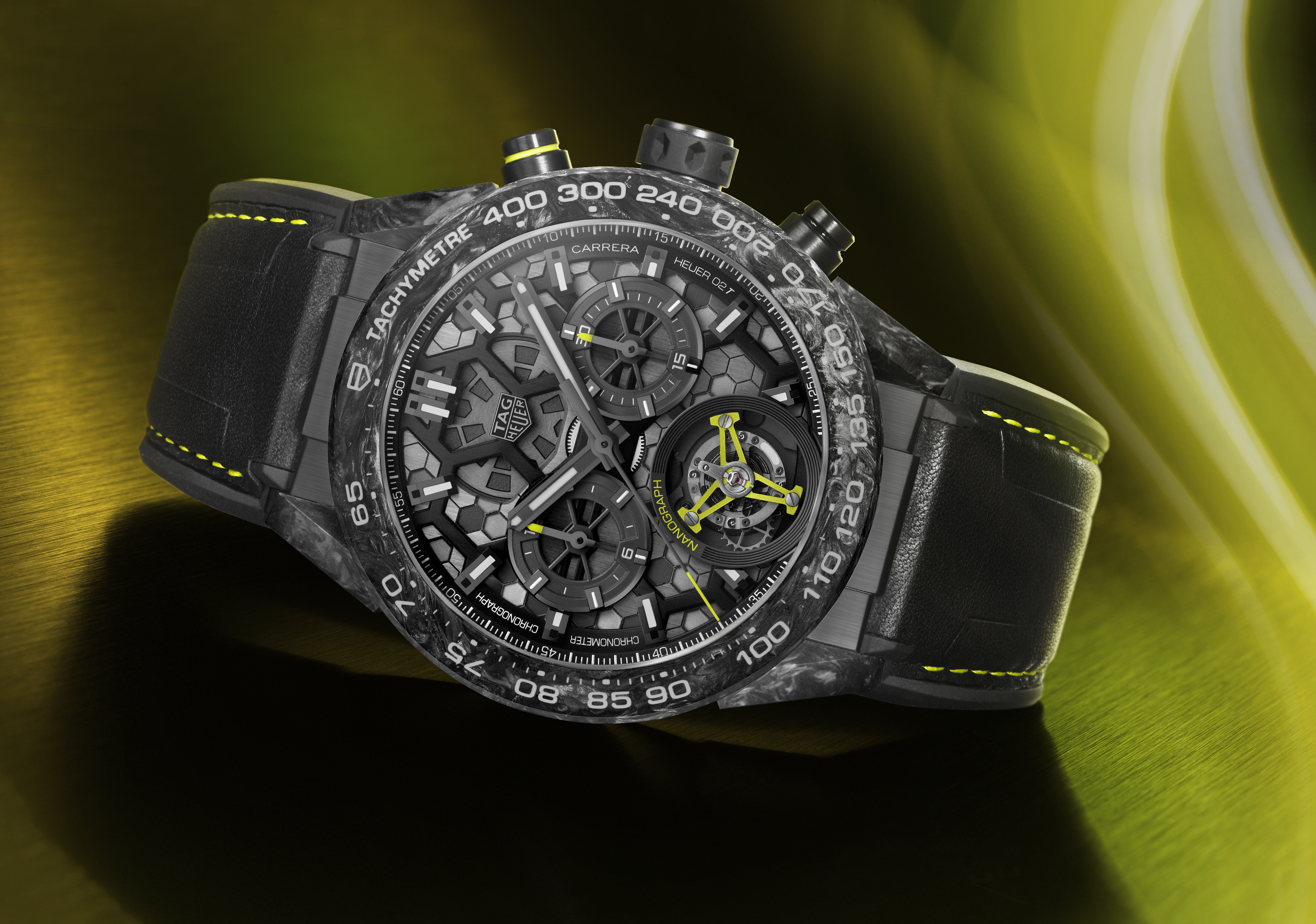 Stéphane Bianchi, CEO of the LVMH Watchmaking Division and CEO of TAG Heuer, said: “This new interpretation of the TAG Heuer Carrera with its advanced in-house technology underscores our legacy in achieving watchmaking excellence and proves that we remain true to our values of performance, disruption and avant-garde.”

The fascinating tourbillon feature of this timepiece bridges the gap between traditional watchmaking craftsmanship and state-of-the-industry innovation. Thanks to its elaborate construction and aesthetics, the tourbillon is among the most impressive complications a watch aficionado can own – and one that only a small number of manufacturers have mastered.

The TAG Heuer Carrera collection has evolved since it was first introduced in 1963, but it has always stayed true to its DNA. The unique modular design and connection to motor racing continue to drive what is one ofthe brand’s most popular lines. 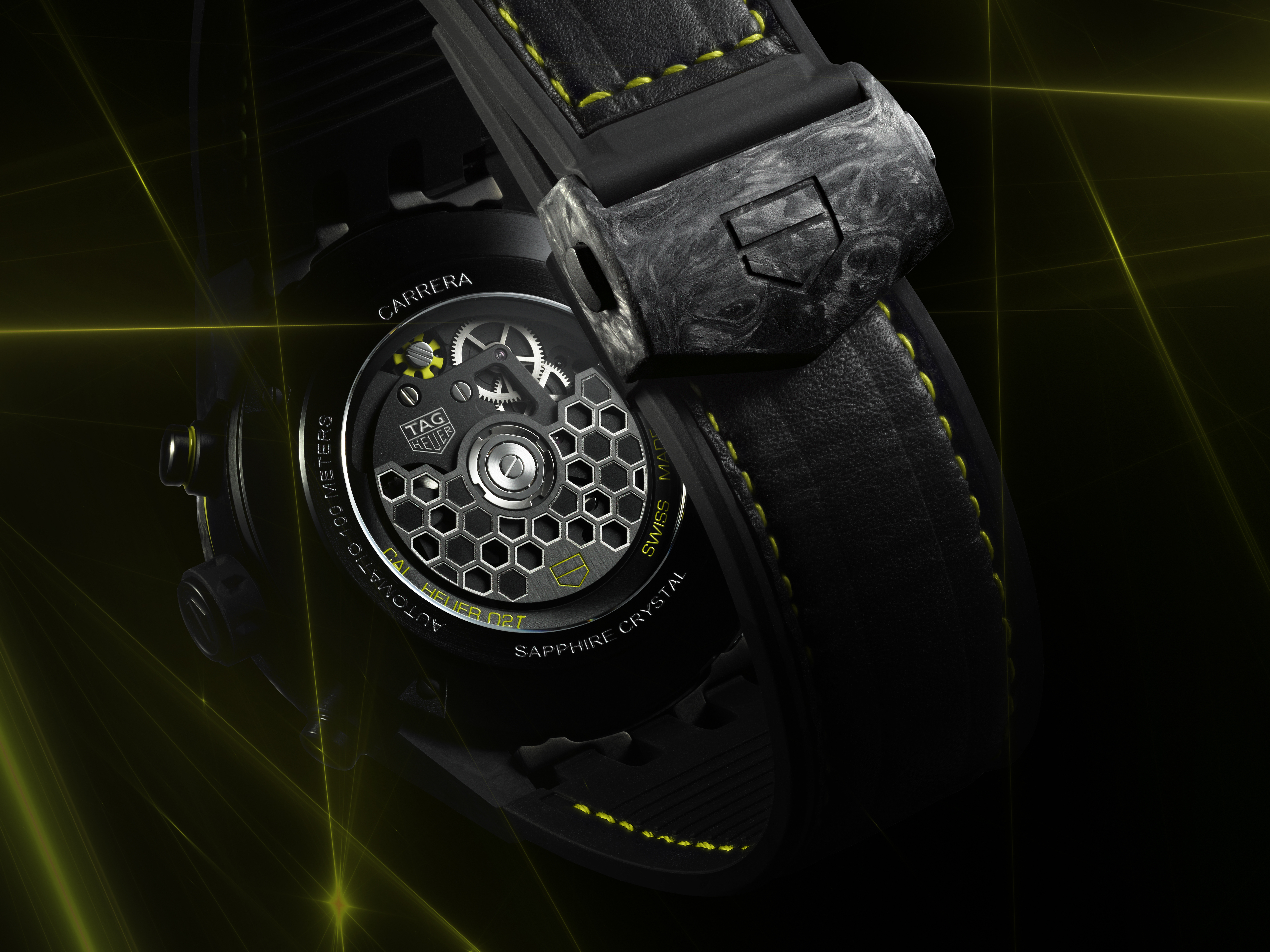 The nanoscopic (one million times smaller than a millimetre) hexagonal pattern of the hairspring’s carbon- composite material is mirrored in the design of the Carrera Calibre Heuer 02T Tourbillon Nanograph. Aside from the carbon-composite hairspring, the most distinguishing feature of this chronometer-certified chronograph is its multilayer dial and movement combination, which features sandblasted and fine-brushed hexagons on the movement plate visible through an open-worked dial. The pattern can also be seen on the oscillating mass, which has been treated with black PVD and is visible through the sapphire caseback. 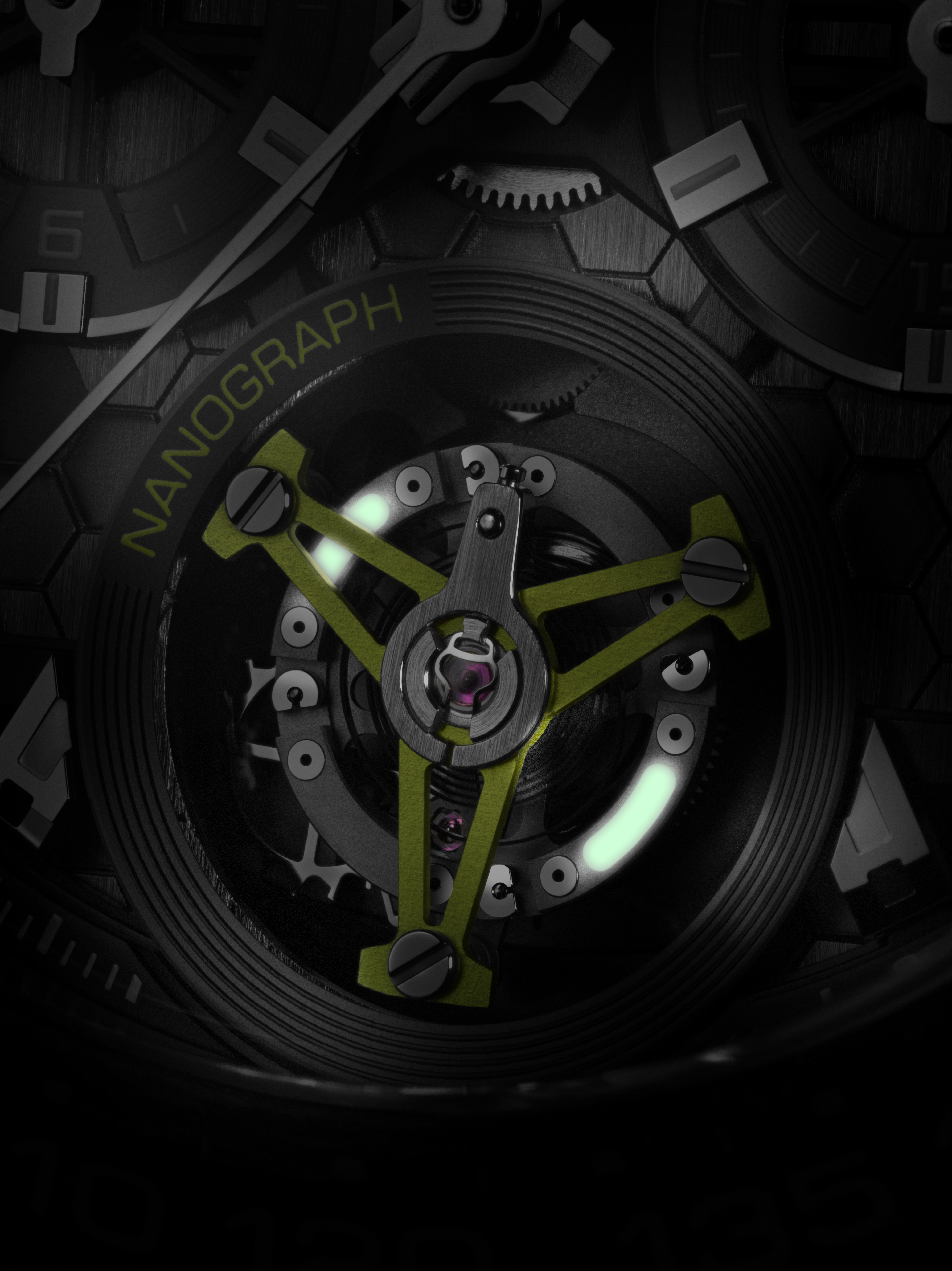 Alluding to haute horlogerie creations of the past, a bright neon green colour adorns various elements of the watch, including the aluminium bridge and the inscription on the tourbillon movement. The aluminium alloy balance wheel stands out with its white gold inserts, while SuperLuminova® markings ensure that the movement is visible day and night.

TAG Heuer Product Director Guy Bove added: “With this new skeletonised tourbillon model in the Carrerarange, we wanted to highlight TAG Heuer’s capabilities both in engineering and in the development ofcompelling movements – like its predecessors, the Carrera Calibre Heuer 02T Tourbillon Nanograph is a force of disruption in haute horlogerie, thanks to its visually exciting blend of modern, high-tech aesthetics and precise, elegant proportions: hallmarks of the Carrera collection for over 50 years.” 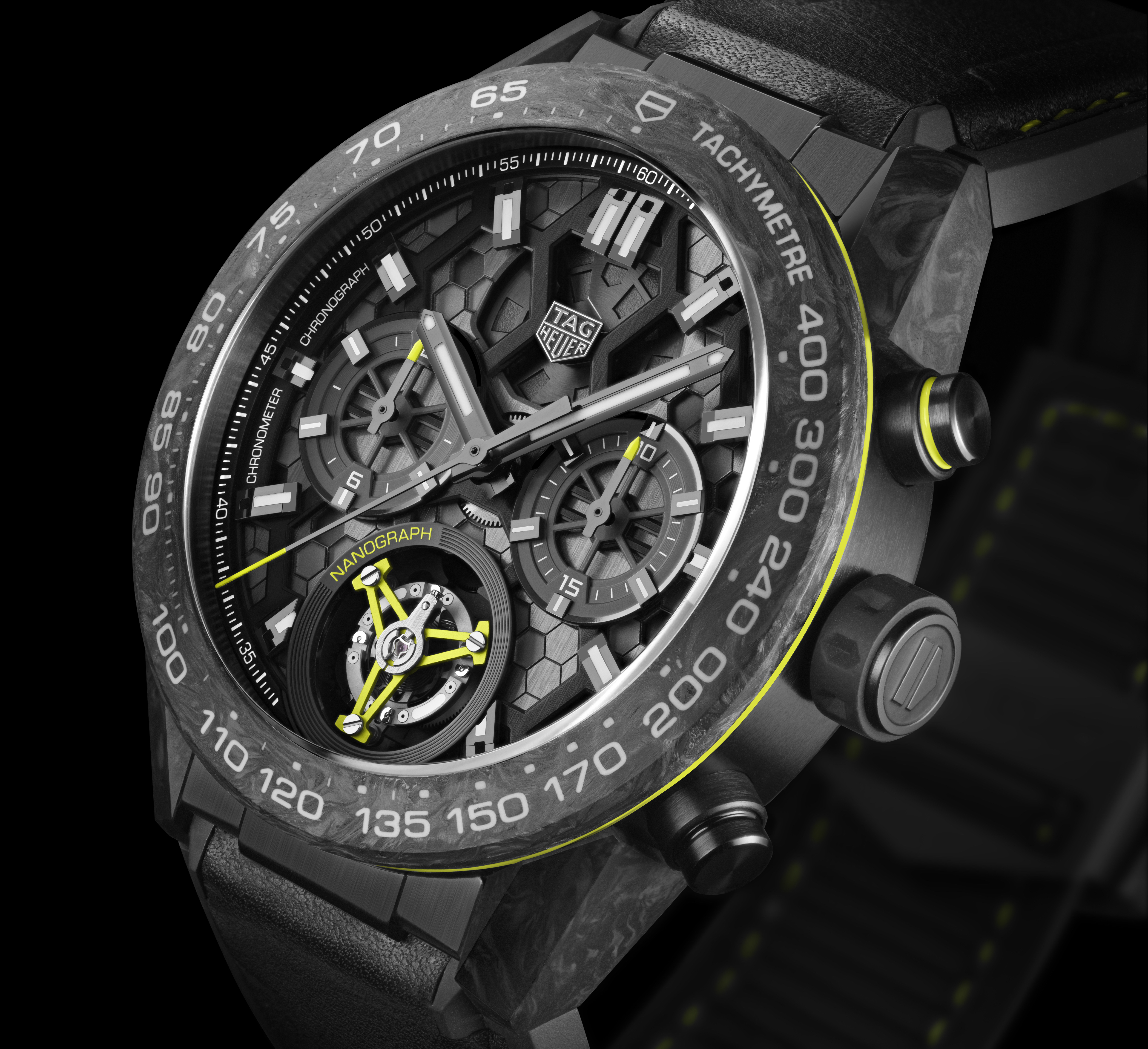 Known as the heart of the mechanical watch, the hairspring is the most difficult part to produce because its minute tolerances directly impact the overall precision of a timepiece. A team of TAG Heuer mathematicians, physicists and chemists are behind the creation of this newly reinvented hairspring. Not only does the carbon-composite hairspring shake up traditional watchmaking, it also improves the performance of watchesfitted with the brand’s chronometer-certified movement. The Carrera Calibre Heuer 02T Tourbillon Nanograph is the first watch to be regulated by this carbon-composite hairspring innovation. 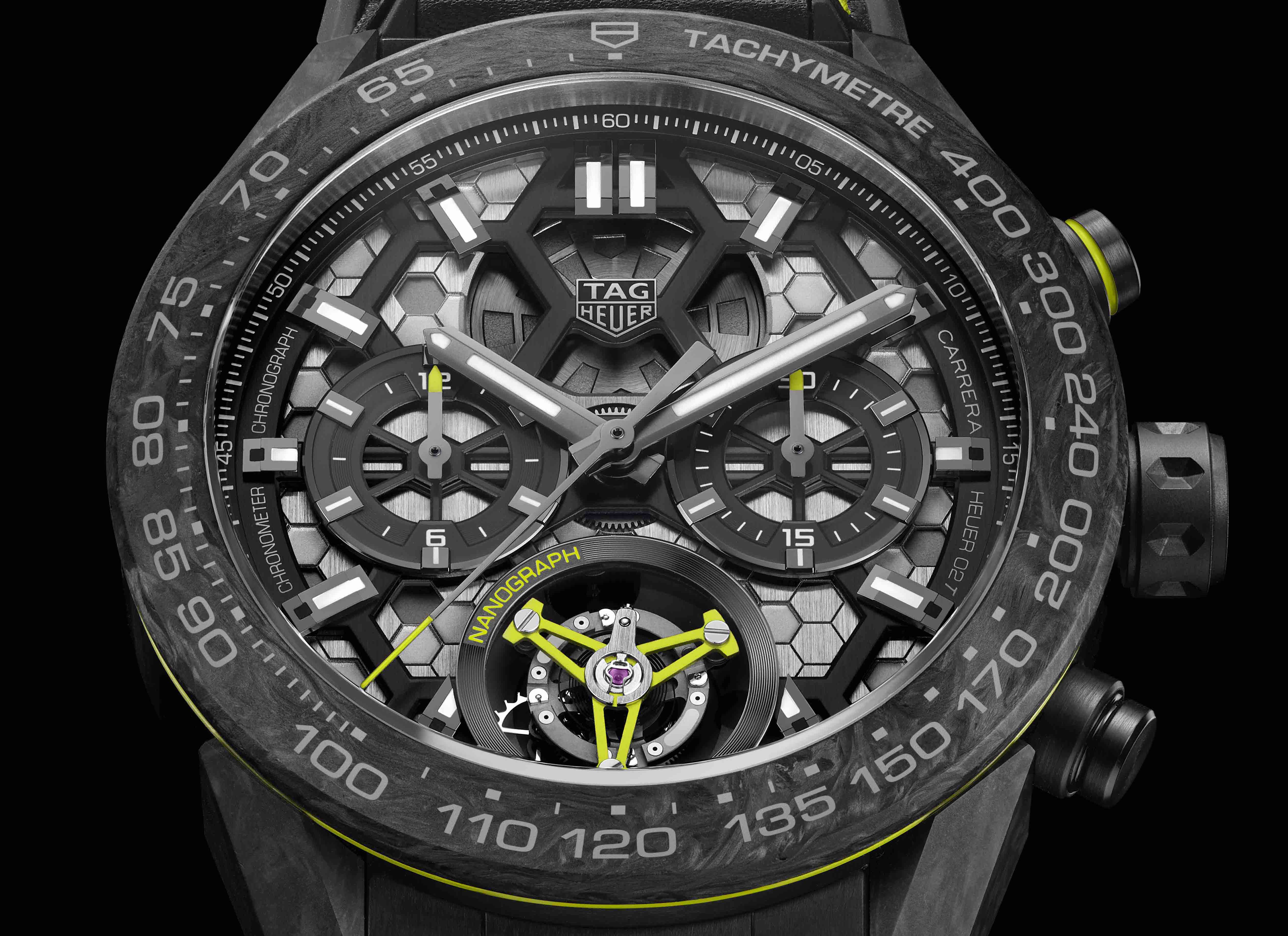 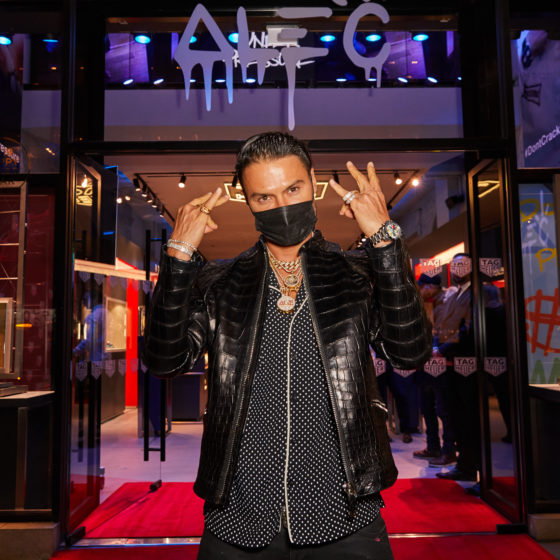 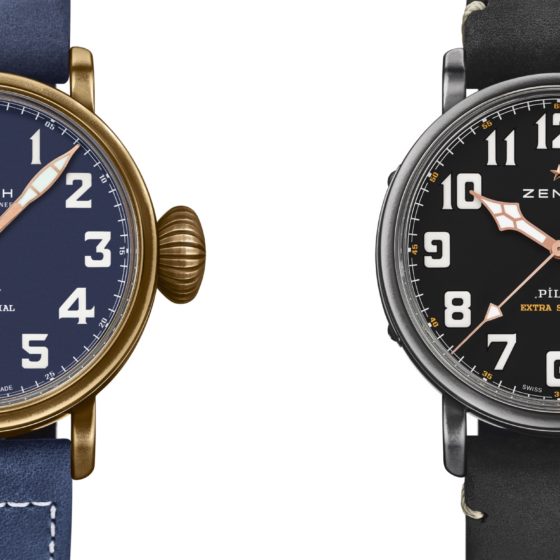