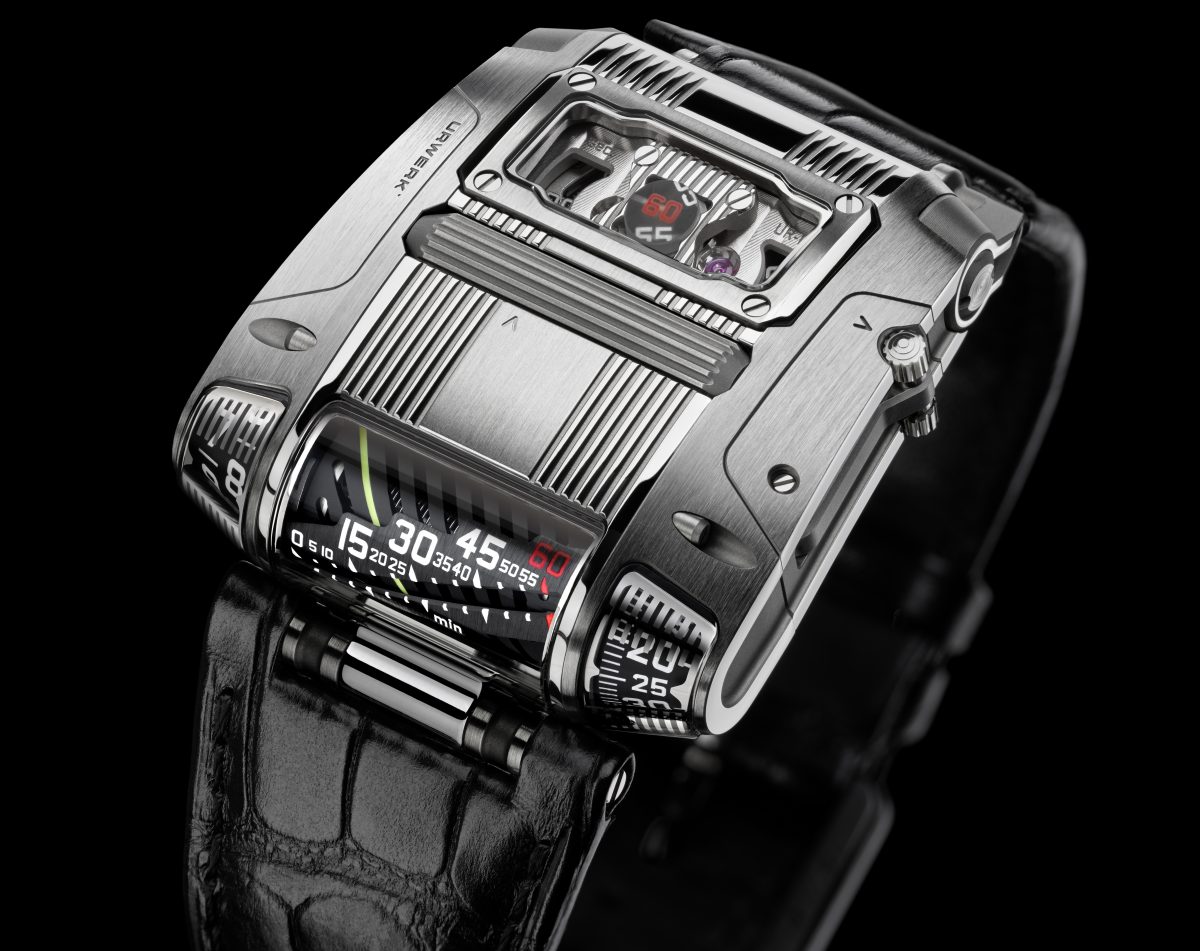 URWERK’s departures from its signature theme of wandering-hour indications have always been spectacular, and the selfwinding UR-111C is no exception.

This latest exercise in complex micromechanics is a worthy rival to the brand’s other “Special Projects” line, in both originality and mechanical virtuosity. For the independent company’s 17 dedicated team members, the UR-111C proved a fiendishly difficult puzzle to solve. 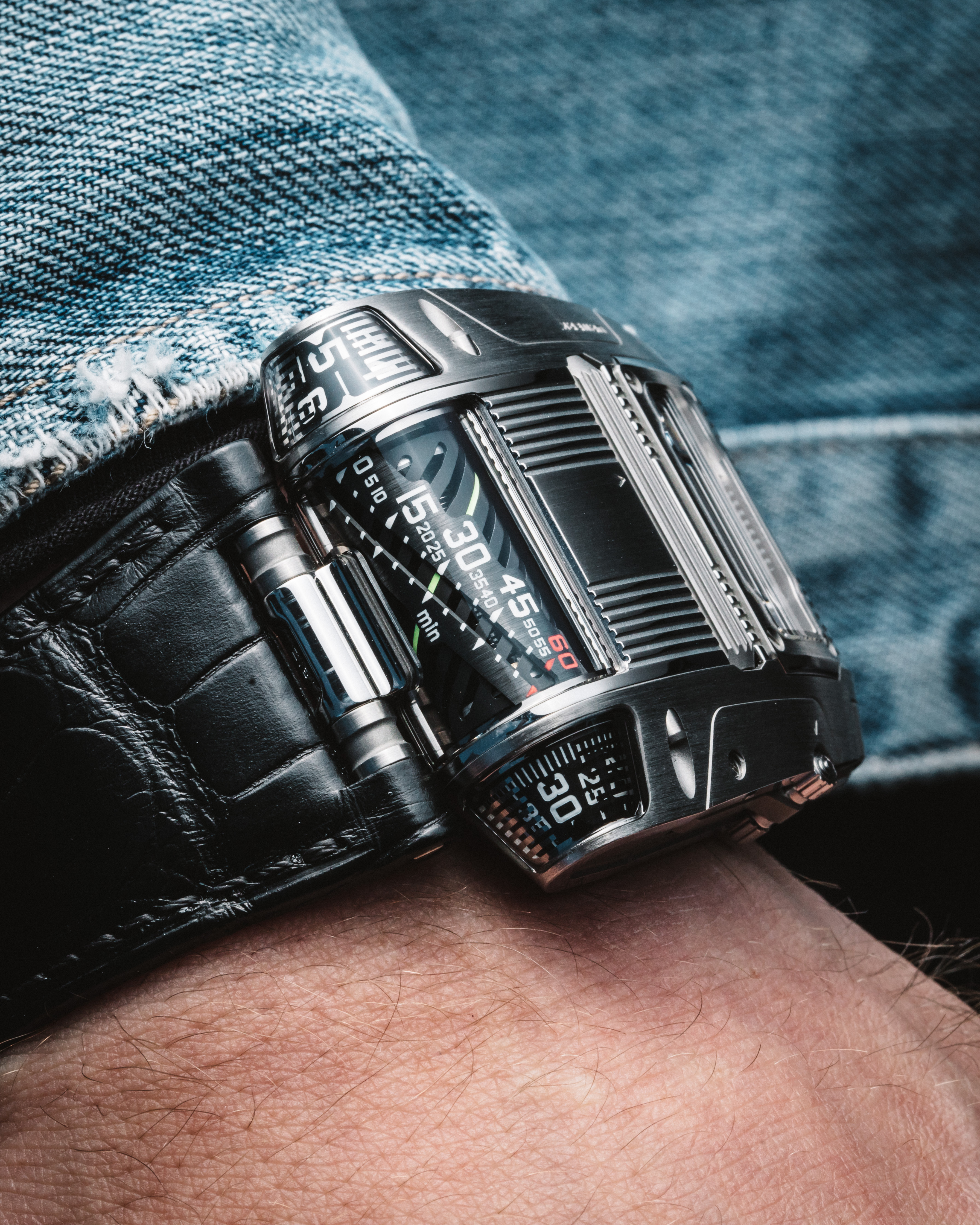 In the URWERK tradition, none of the indications of this UR-111C watch are conventional: The minutes are shown in two different ways – linearly for eyes pleasure and digitally for precision. Never has a roller on the case performed the functions of the crown, nor have the running seconds meandered across a cluster of optical fibers. Nor would it be an authentic URWERK watch if its case didn’t look as if it had been designed by a Sci-fi passionate.

Felix Baumgartner and Martin Frei, the co-founders of URWERK, have always considered the owner’s interaction with the watch of extreme importance. “Wearing a fine mechanical object is a source of pleasure and pride,” declares Felix Baumgartner. “There has to be a strong bond with a mechanism that merges into your wrist and communicates with you. A mechanical watch is like the first steps towards enhanced intelligence: a machine that becomes part of you and which gives you information in return for energy. It’s an exchange. You take care of your watch and it will provide you with a lifelong service.” 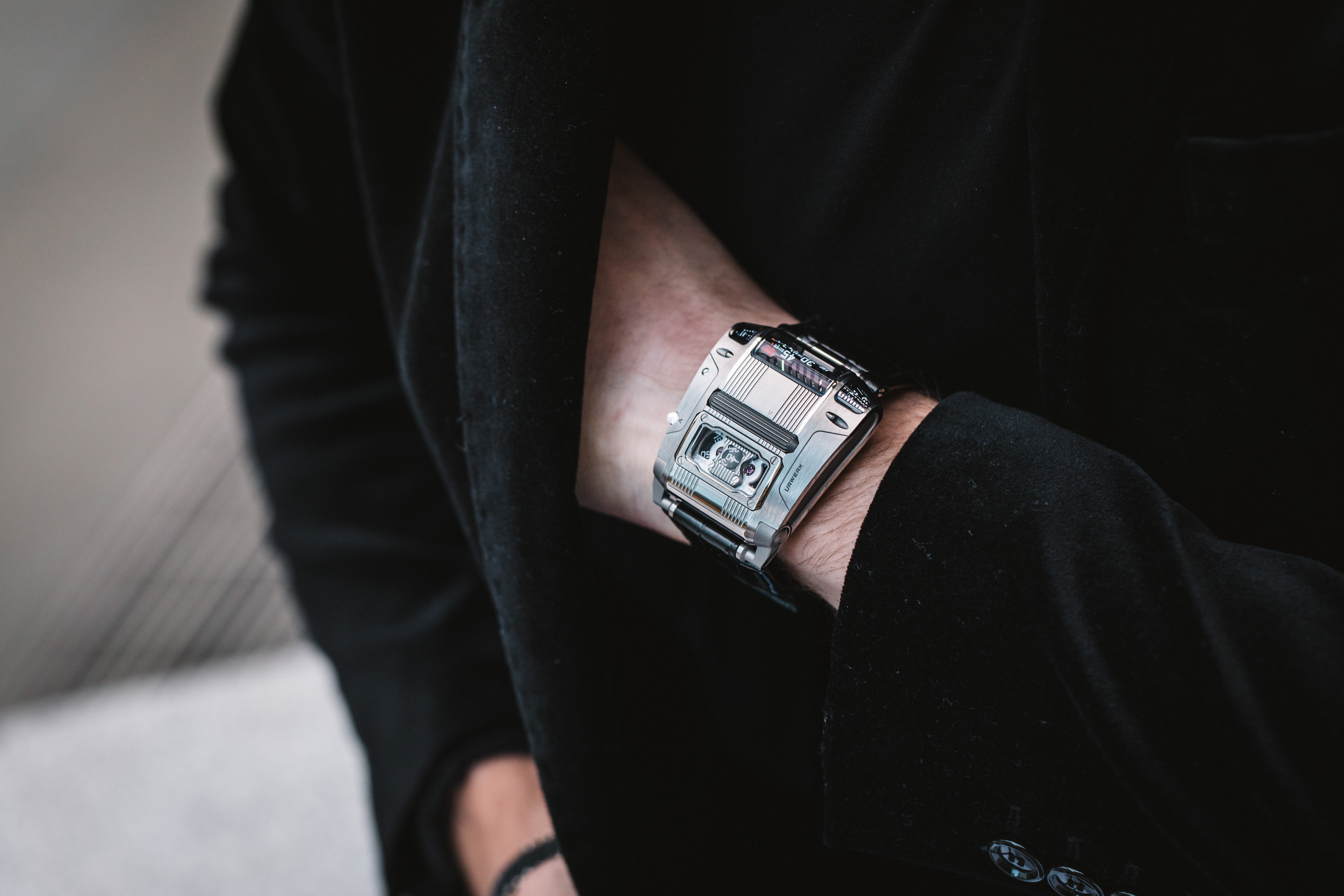 Then these two had to turn their intention into reality and create a new interface with the watch. So instead of the conventional crown at the end of the stem, they conceived a roller integrated into the top of the case above and parallel to the winding stem. Rolling the long fluted cylinder with your thumb to wind the watch is indeed a new sensation, but making it possible requires miniature gearing, complex articulations and intermediate wheels to connect the controls to the winding stem.  The same applies to the original way of setting the time. Instead of pulling out a crown you swing out a lever from the side of the case and turn the roller in either direction. 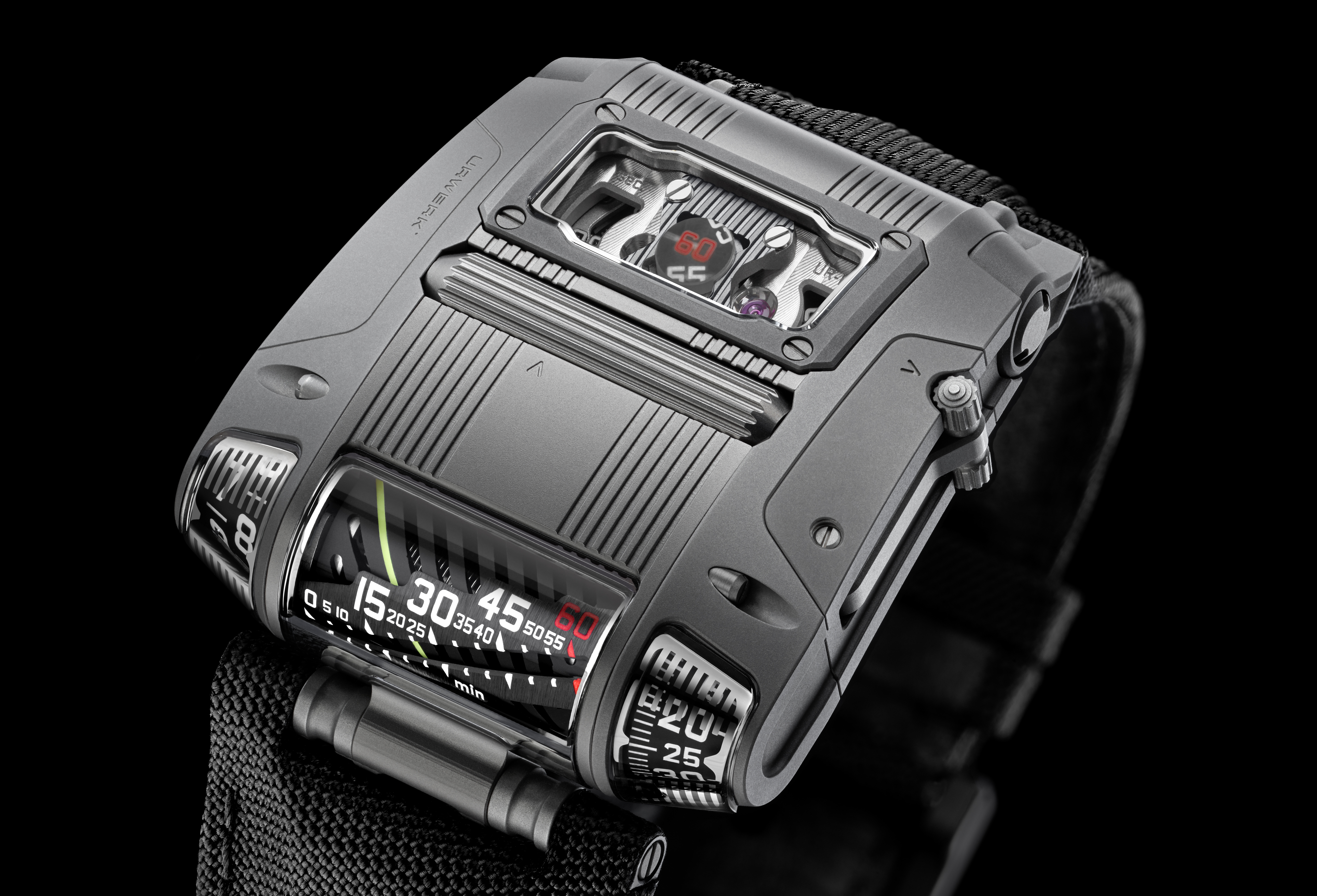 The hours and two versions of the minutes are displayed within glass sapphire covers along the side of the case so that you can see them at a glance without turning your wrist or letting go of the steering wheel. Again, converting the horizontal movement to a vertical time display required precisely angled transmission with miniature bevel gears. The jumping digital hours and progressive minutes are displayed on rotating truncated cones left and right of the retrograde linear indication of the minutes.

Of course, the linear display of minutes has been done before by URWERK in the CC1 King Cobra watch, but Martin Frei decided to set an extra challenge to URWERK’s construction engineers for the UR-111C, He wanted to produce something visually different and make the linear track longer at the same time. He therefore decided that the linear track of the display should slant diagonally across its aperture, instead of horizontally in line with the rotating cylinder that carries the helix marker along the track of minutes. Because of the slanting track, the cylinder rotates 300 degrees about its axis to bring the helix to the 60thminute, at the same time arming a long, coiled spring. To bring the helix back to the start, the spring releases to snap the cylinder forward another 60 degrees and make the hours jump to the next hour. 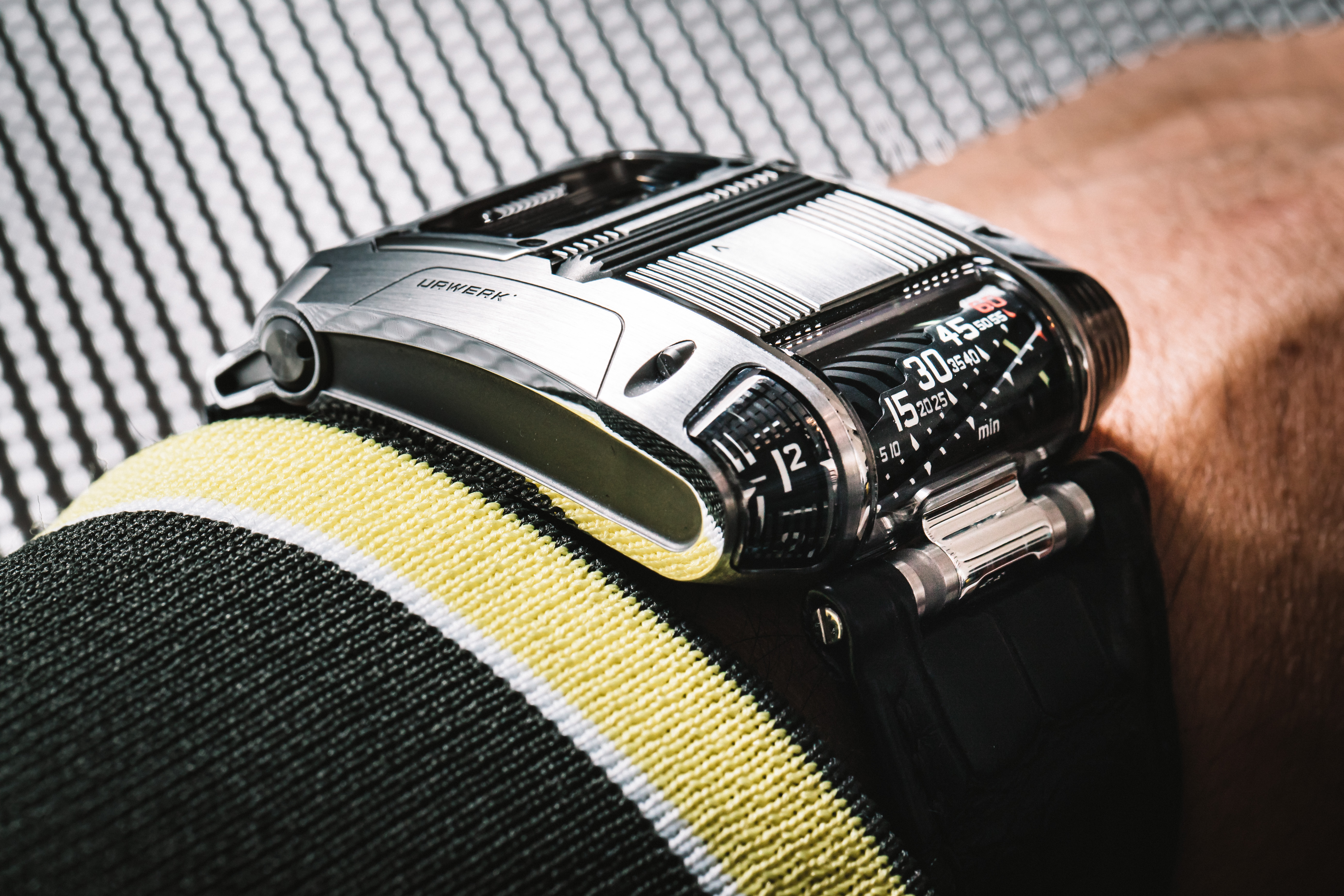 The UR-111C’s digital seconds are mounted alternately on two tiny wheels: 10, 20, 30, 40, 50 and 60 on one wheel, and 5, 15, 25, 35, 45 and 55 on the other. Each openwork seconds wheel weighs 0.018 grams (0.025g with numerals) — miniature lacework in metal thanks to the LIGA process. The seconds numerals look strangely close as they pass across a circular window in sinuous progression. They appear alternately, transported into visual range by a dense cluster of precisely aligned optical fibers, known as an image conduit, positioned a tenth of a millimeter above the numerals. This is a world Première in the watchmaking area!

The final touch of complexity in an already complex machine is its case. The movement with its unique indications, complicated transmission systems and selfwinding gear have to be slotted from the side of the case, once the panels have been removed and the time-setting lever dismantled. This is a slow and delicate operation given the tiny clearances and fragile mechanisms.

The various finishes of the case are worthy of note — a harmonious combination of surface textures that have been sanded, shot-blasted, polished or satin finished. A simple screw can be finished in a number of different ways according to the surface on display. 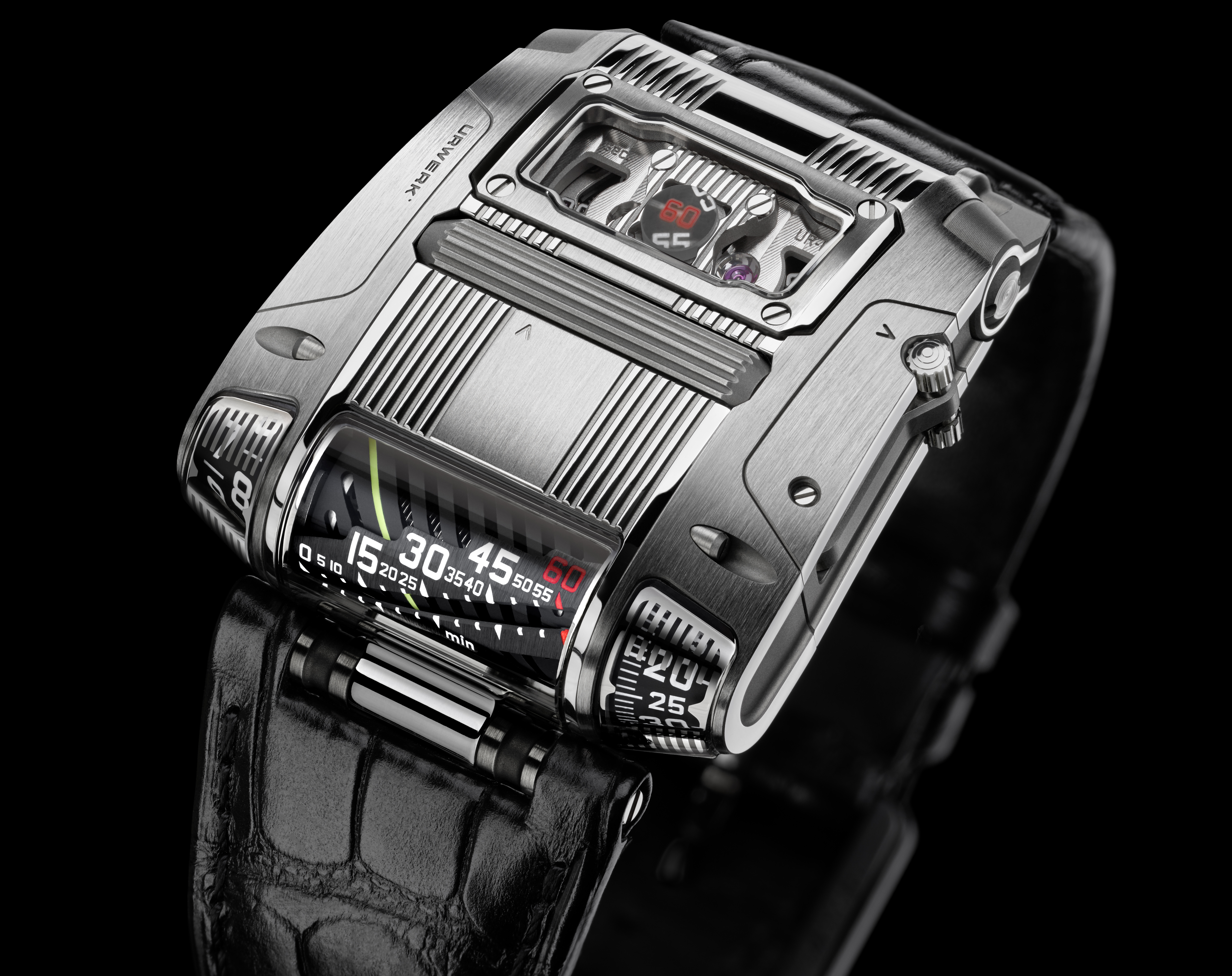 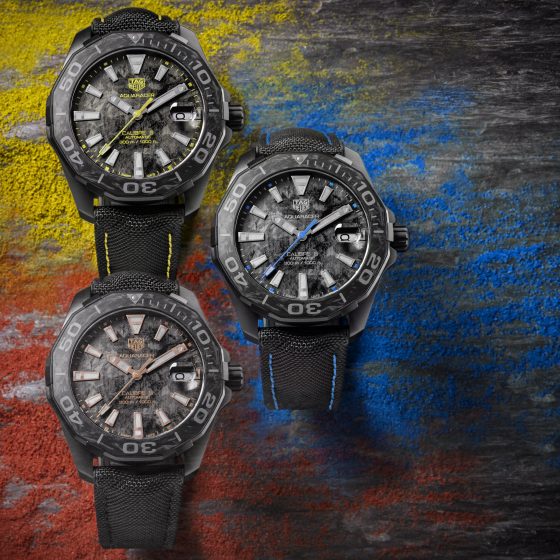 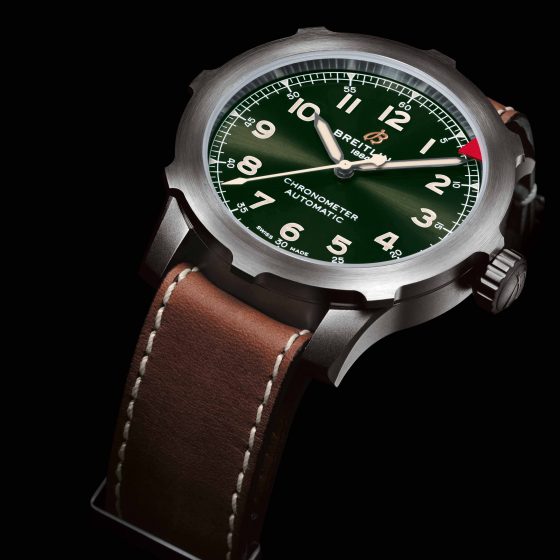