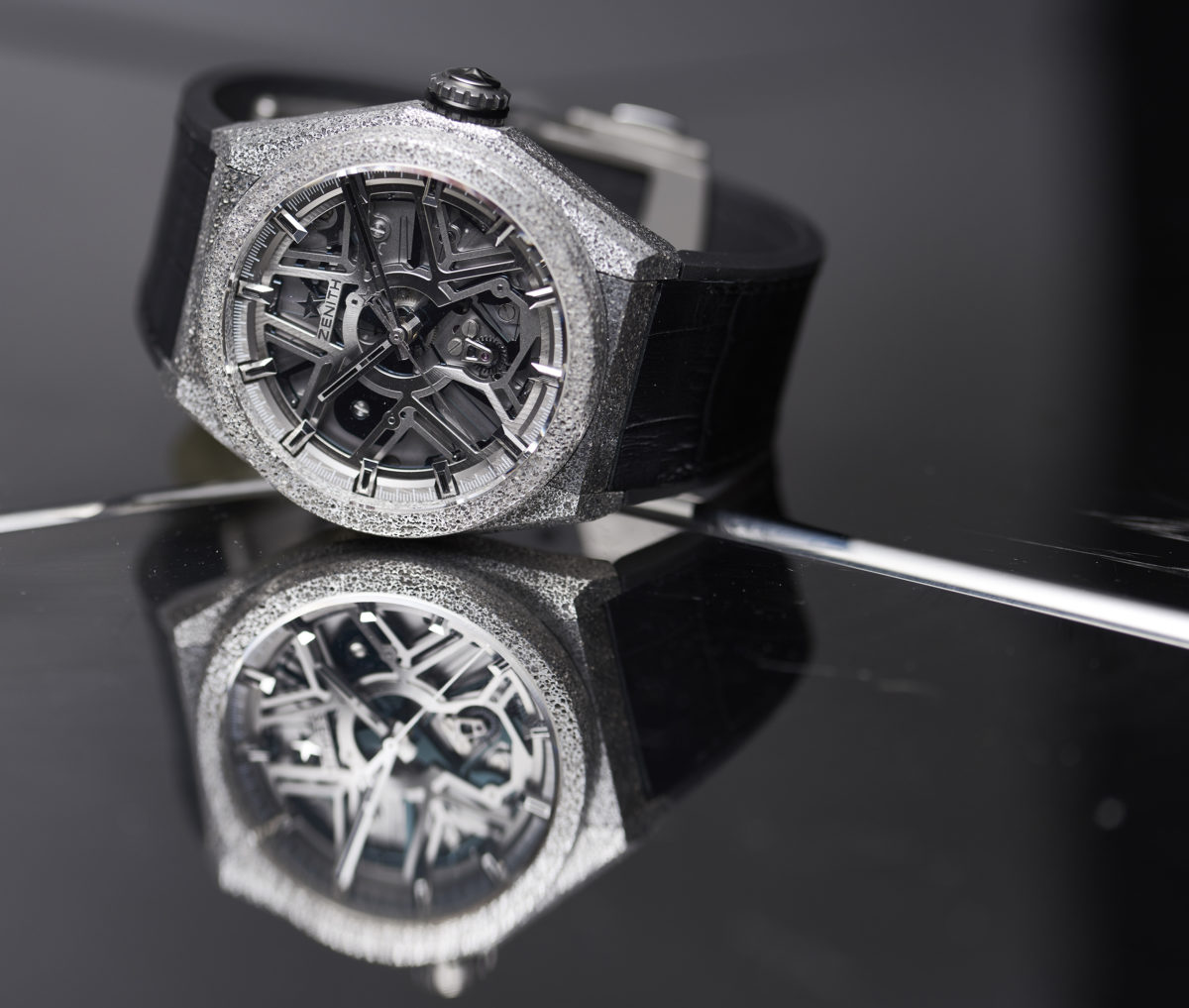 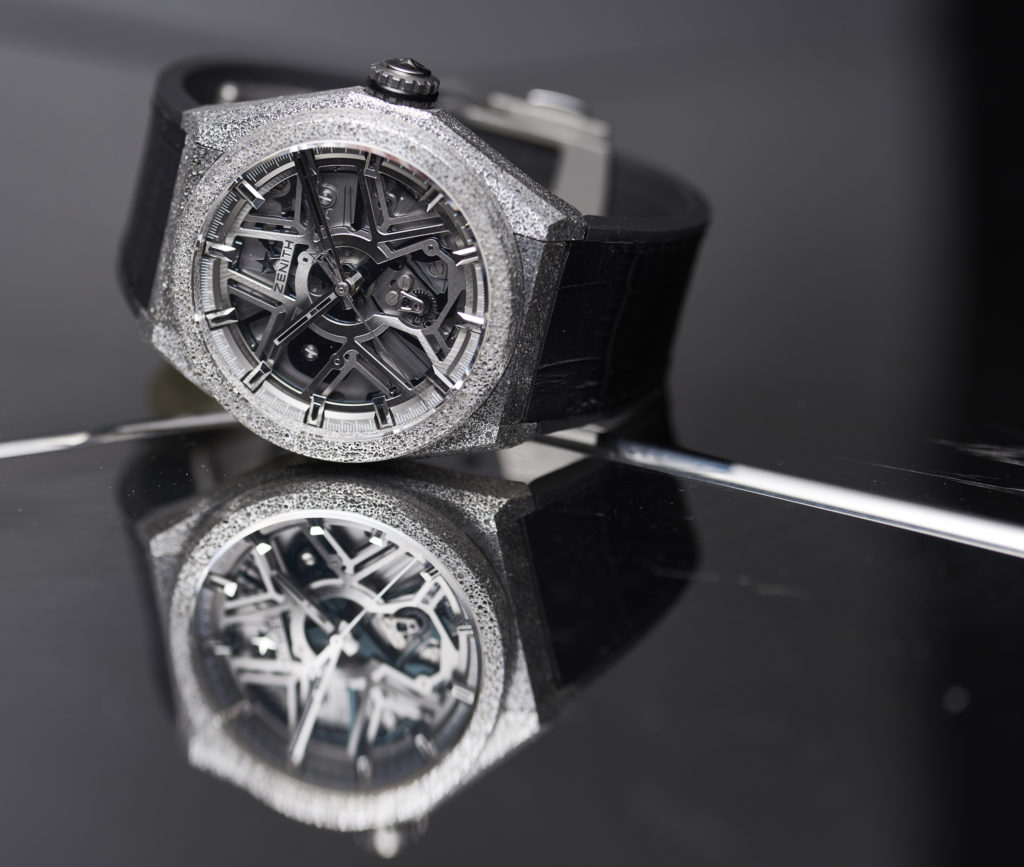 Zenith is writing its future and starting a new chapter in the history of the Swiss watch industry with its world’s most accurate mechanical watch.

Manufacture Zenith has been making mechanical watches for 152 years and currently has the capacity to produce around 40 different movements (featuring various shapes and equipped with complications), reflecting its exceptional expertise. 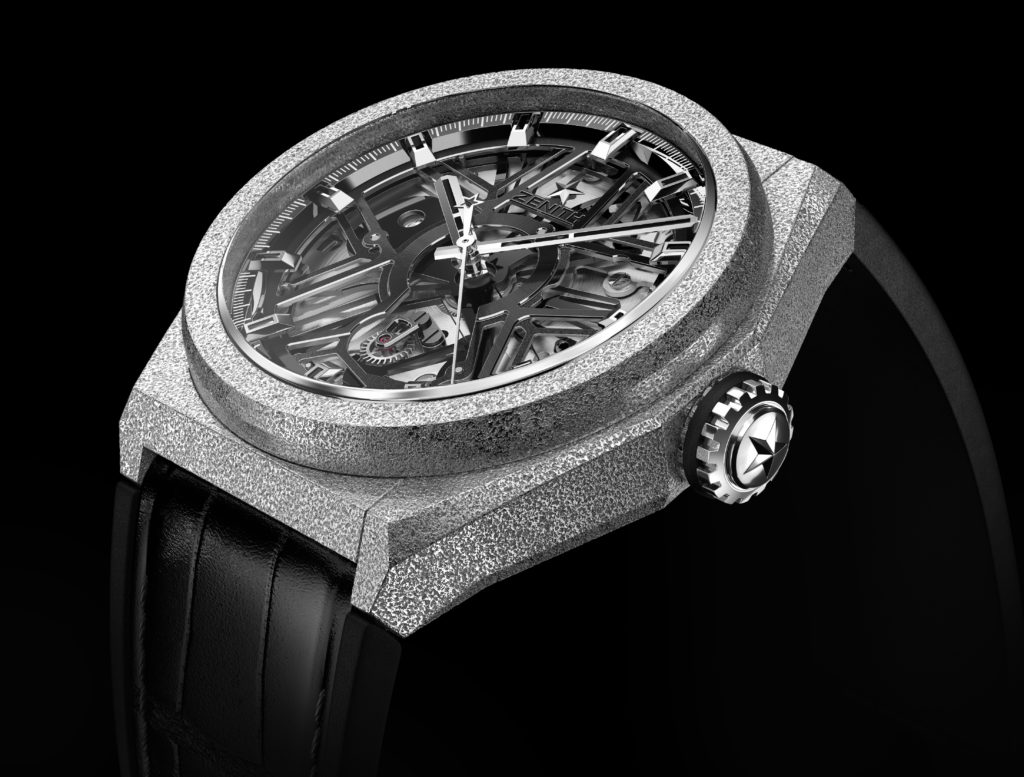 Connoisseurs will scarcely need reminding of the paternity of the Swiss watch industry’s first ever automatic chronograph introduced in 1969, which also featured a function that had not yet been seen nor even imagined at the time. Nobody was capable of measuring tenths of a second, the unit of time naturally stemming from a 5 Hz oscillation frequency. It represented a kind of watchmaking Holy Grail! The El Primero movement is often cited and has indeed become a Swiss watchmaking legend that vividly reflects Zenith’s enduring attachment to innovation and the quest for precision. 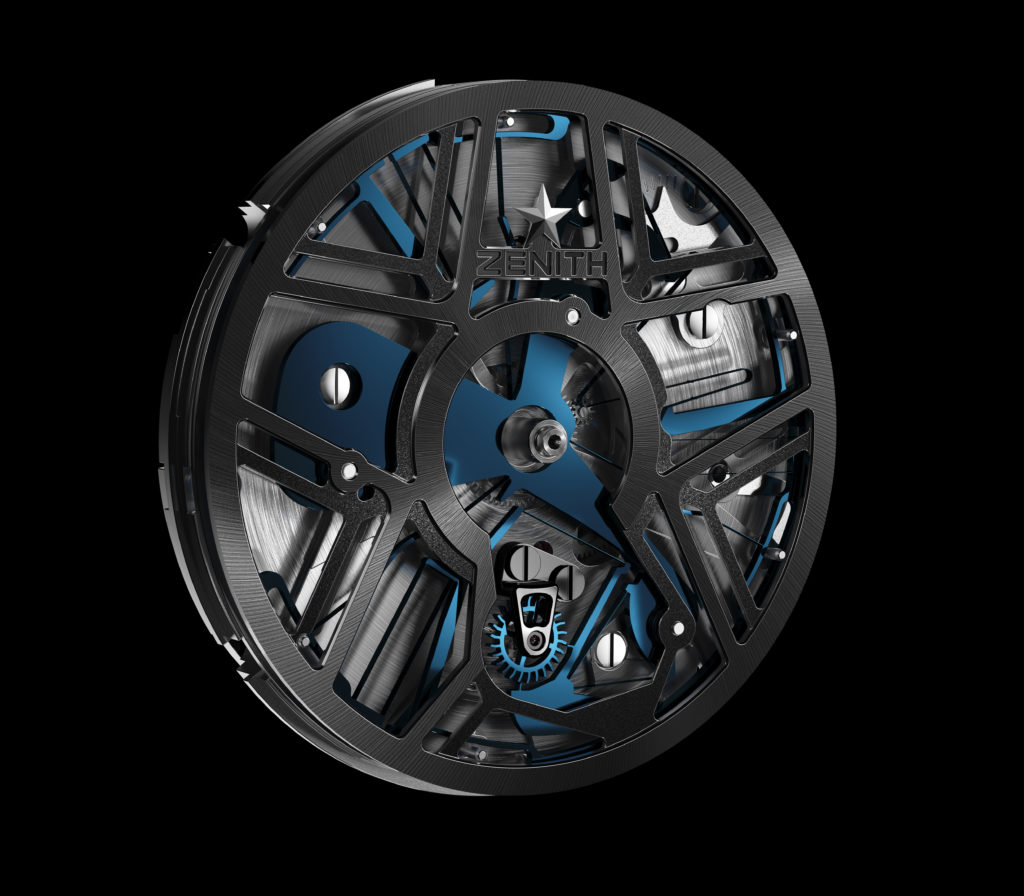 Zenith is now renewing ties with innovation and fundamental research by presenting Defy Lab and its new oscillator – an invention that challenges nothing less than the operating principle of mechanical watches invented by Christian Huygens in the 17th century. 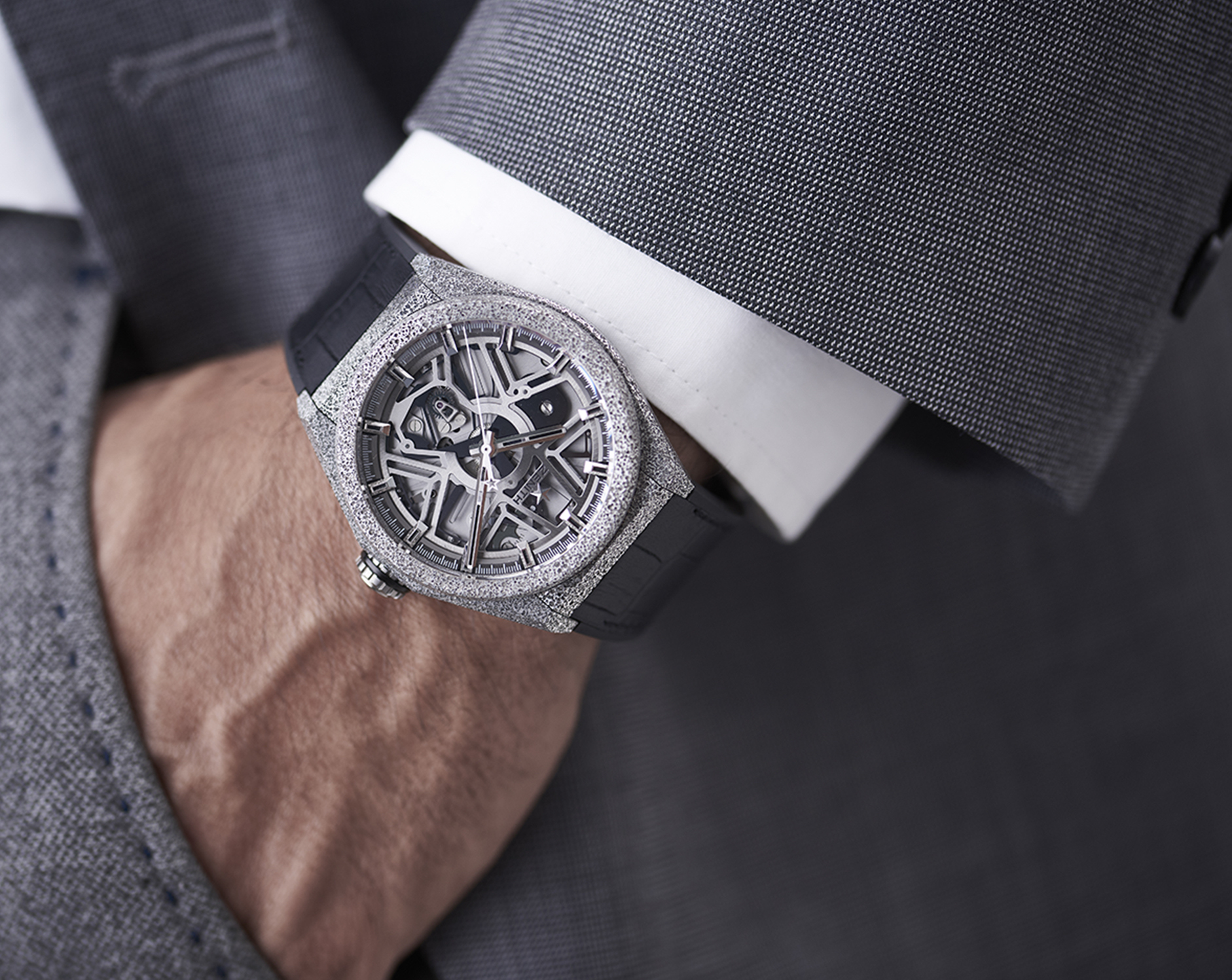 The announcement was made at a press conference held at the Manufacture Zenith in Le Locle and hosted by Jean-Claude Biver, President of the Watch Division, along with Zenith CEO Julien Tornare and Guy Sémon, CEO of the Science Institute LVMH. This innovative watch was developed through achieving effective synergies between the skill sets cultivated by the brands composing the group’s Watch Division, an endeavour overseen by Guy Sémon. 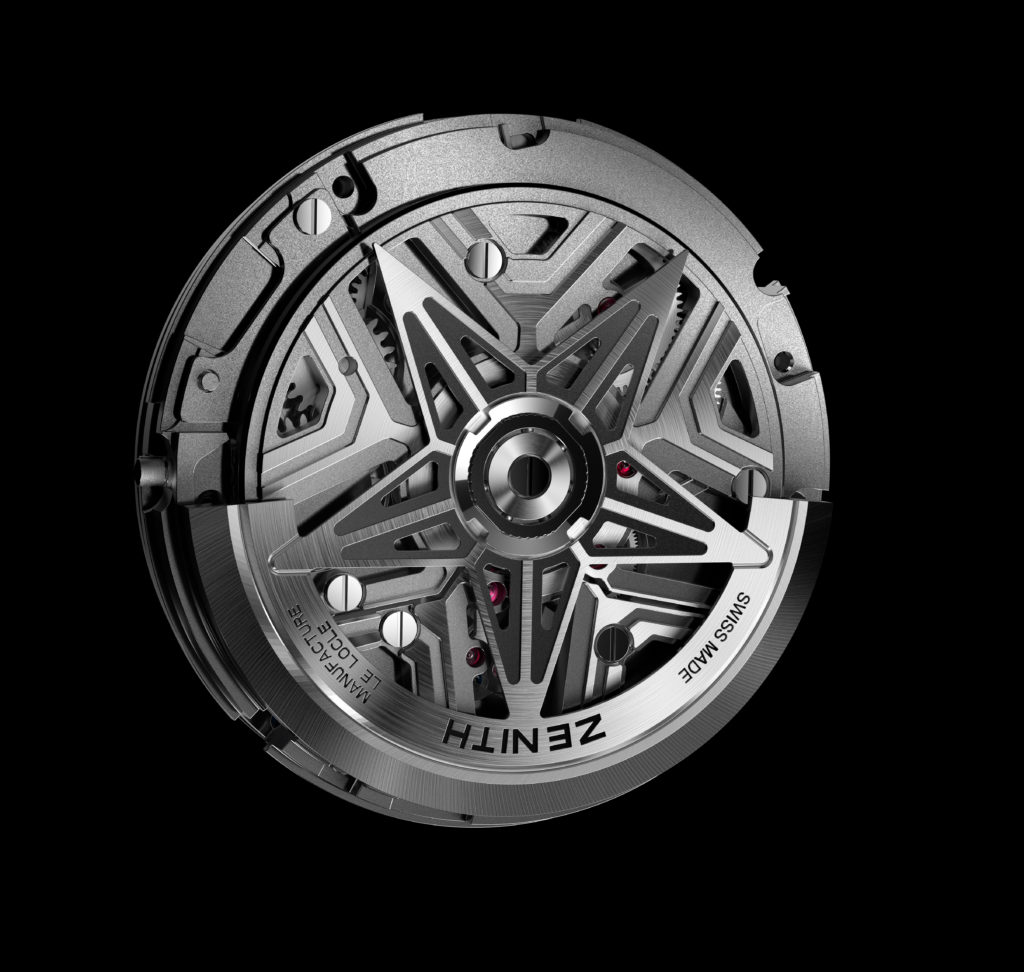 With the Defy Lab, Zenith introduces a completely revamped movement called the ZO 342. This calibre measuring 32.8 mm in diameter and 8.13 mm thick reveals its distinctive nature at first glance: the barely 0.5 mm thick Zenith Oscillator appears beneath the dial. Its functionality has been considerably optimized: the Zenith Oscillator is an all-of-a-piece organ without mechanical linkages that replaces the 30 or so ordinarily assembled, adjusted, regulated and controlled parts. The absence of conventional mechanical couplings eliminates contact, friction, wear, slack, lubrication, assemblies and dispersions. The wheel replacing the escape wheel has a specific design and its cycle does not correspond to the traditional behaviour of a Swiss lever escapement. It is made of silicon showing superficial oxidation. 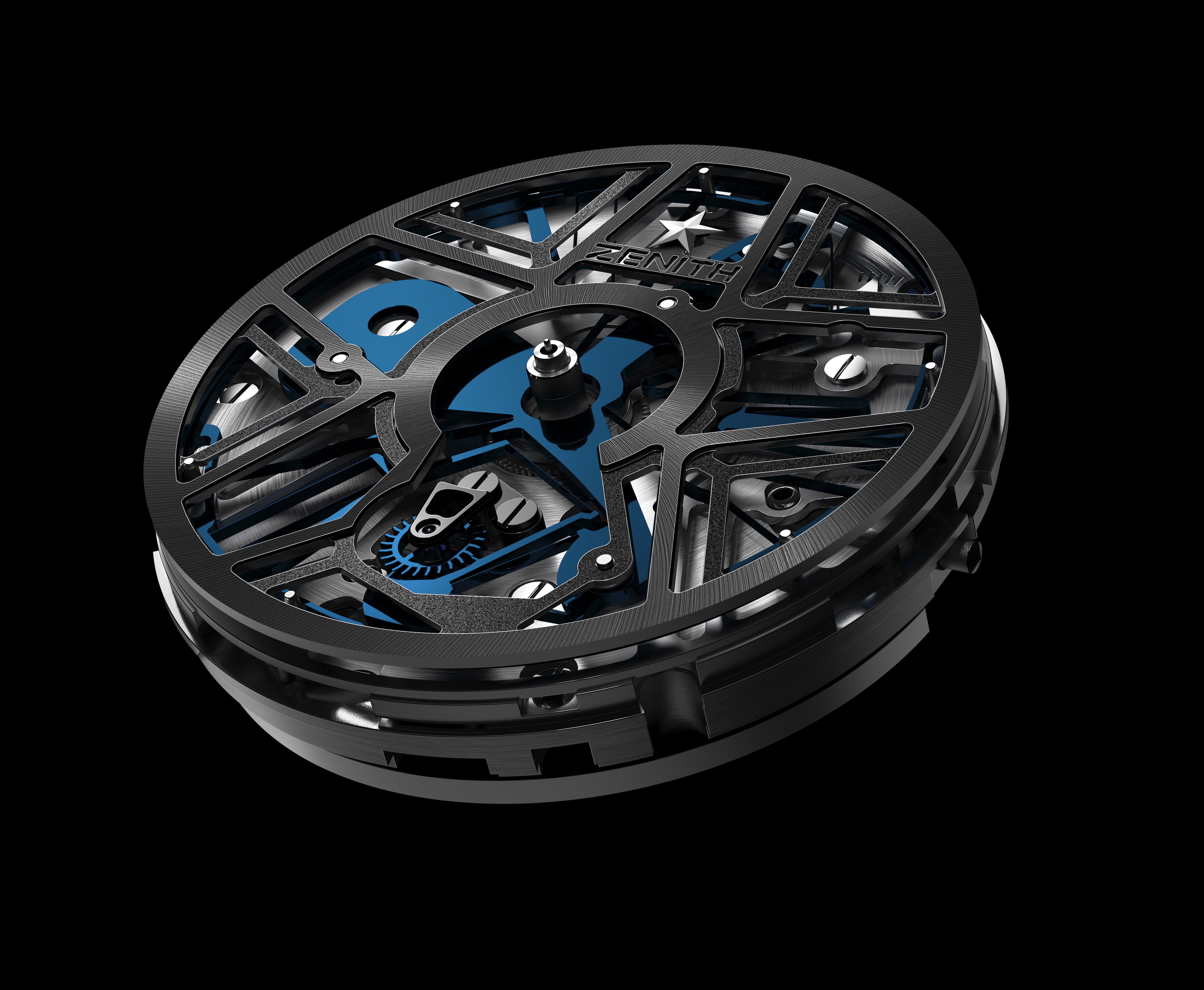 The Zenith Oscillator beats at a frequency of 15 Hz (108,000 vibrations per hour) frequency, three times higher than that of the historical El Primero movement, while enjoying a 10 percent higher power reserve. There is no sign of jerking and the permanent running seconds hand rotates smoothly around the dial. This simple comparison makes it possible to appreciate the improvement in energy consumption compared to a conventional balance & hairspring system. The amplitude is +/- 6 degrees, as against the more than 300 degrees of a conventional system. 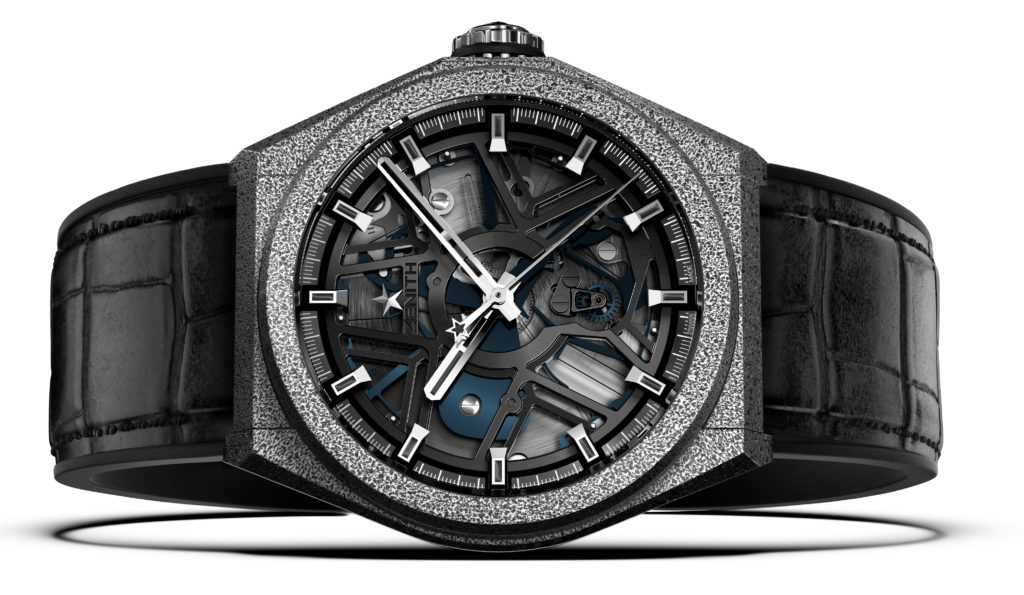 Aeronith is a new material – for which a patent has been filed by Hublot’s R&D department under the supervision of its director Mathias Buttet – mainly distinguished by its lightness. This characteristic is a nod to Zenith’s longstanding aeronautical tradition, notably featuring the first victorious Channel crossing by Louis Blériot in 1909 wearing a Zenith watch, as well as the extraordinary feat accomplished by Felix Baumgartner in 2012 – the highest human freefall jump from an altitude of 38,969 metres. In the process, he became the first man to cross the sound barrier in freefall, again with a Zenith watch on his wrist. Thanks to its mastery of the Art of Fusion, Hublot has developed this material made of aluminium foam and a special polymer. The result is a new hybrid material (rather than an alloy) that is 2.7 times lighter than titanium, 1.7 times lighter than aluminium, and 10% lighter than carbon fibre. 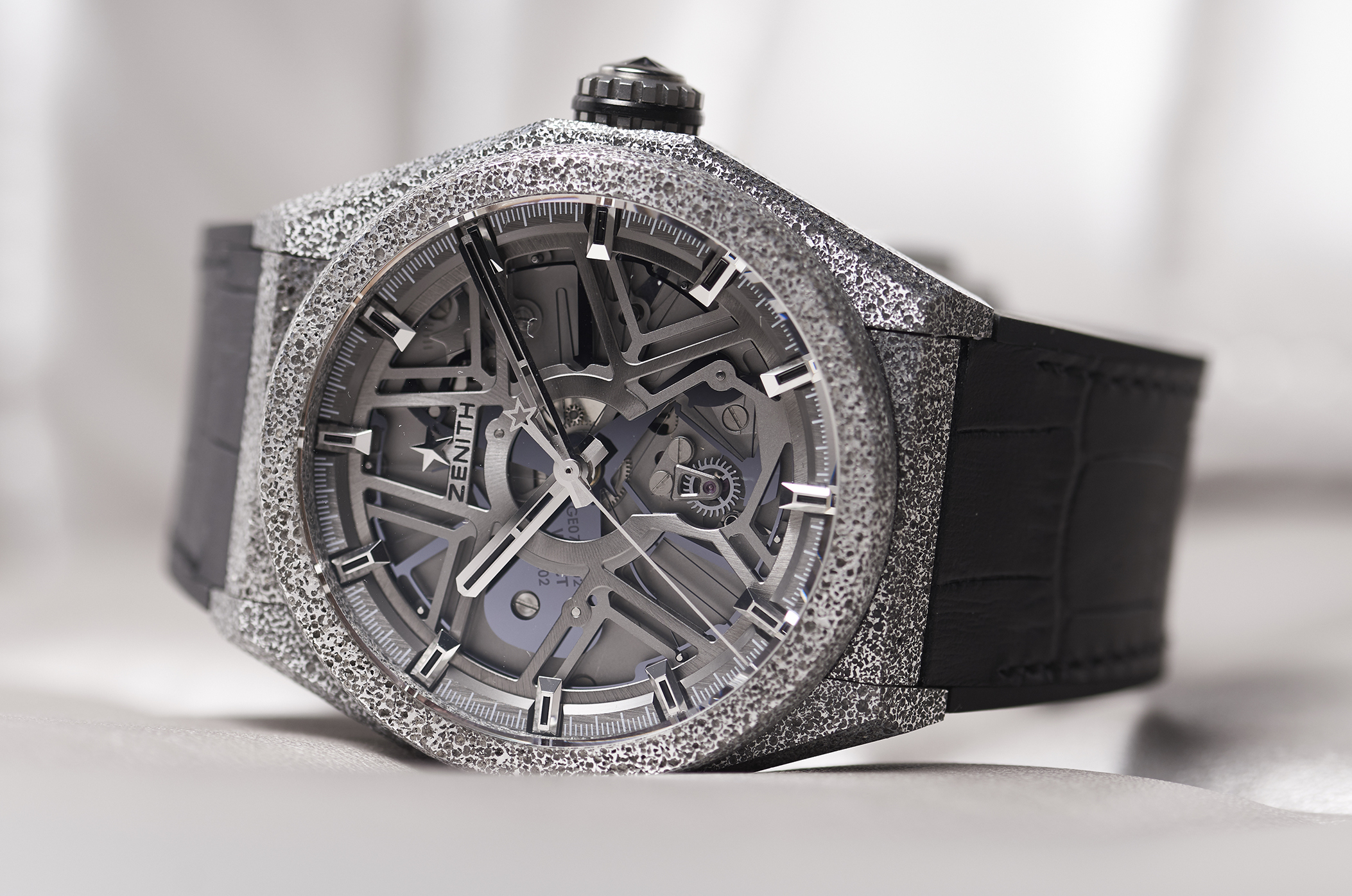 The production process for this hybrid material involves cutting-edge technologies and begins with heating aluminium to melting point. Known for its use in naval applications, Alu 6082 has been chosen for its excellent corrosion resistance. It is poured into a mould where a procedure internally developed by Hublot transforms it into an open-pore metal foam. These interspaces are then filled with an extremely light special polymer resistant to ultra-violet rays and anti-allergenic when in contact with the skin. The resulting material is cooled and becomes extremely light and highly resistant, endowed with mechanical properties entirely suited to a watch case, while minimising its density and thus its weight. Its machining is as easy as with traditional precious metals. 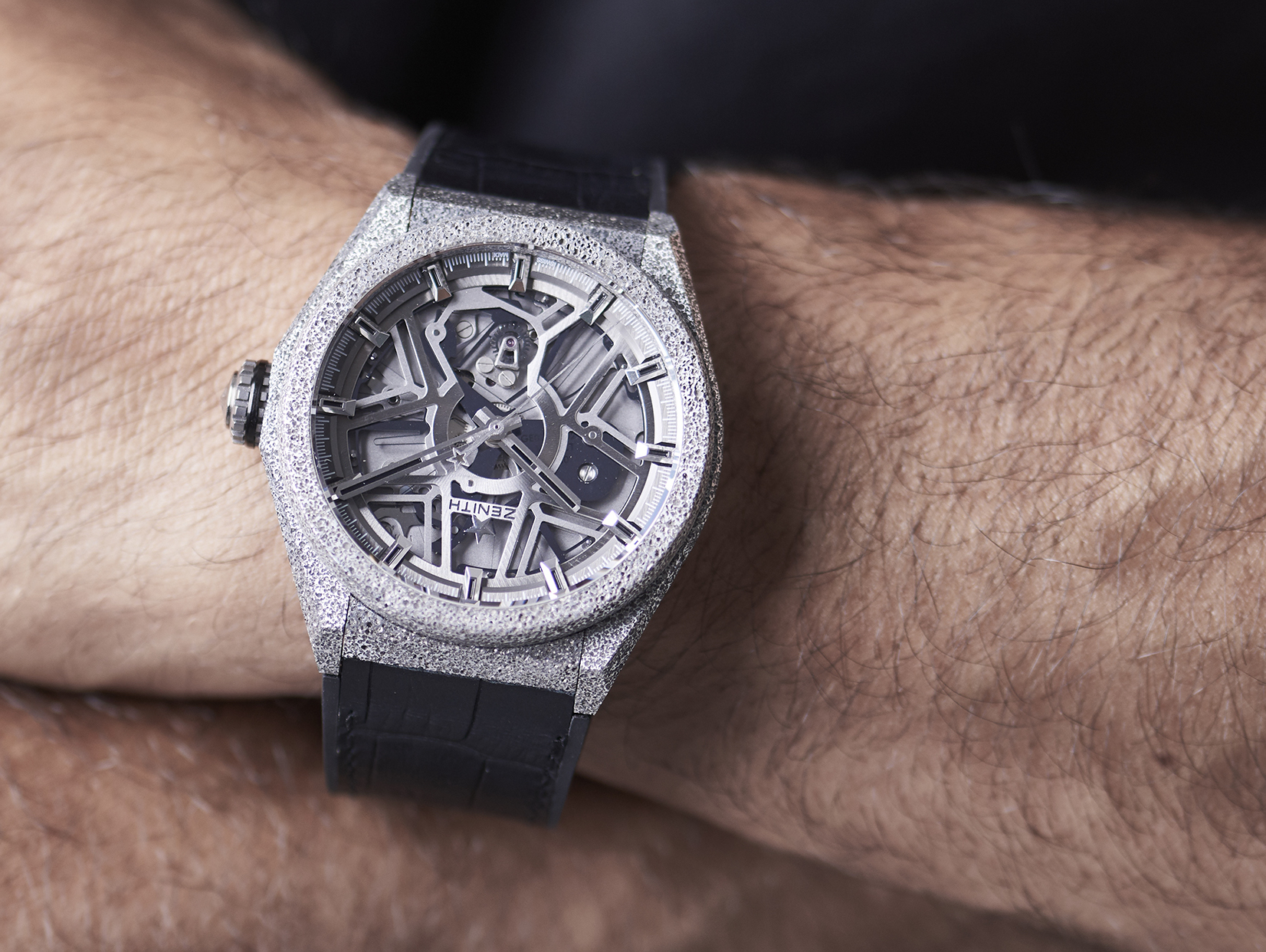 Less parts, made from pioneering materials and featuring cutting-edge technologies, deliver improved functionality, resulting in the most precise mechanical watch in history. The future of the watch industry is in the making. Like all major innovations, only 10 of these watches have been produced. Serial production is the next goal towards which the in-house teams are already working, notably with a view to creating a different and original design.

Monolithic regulating organ (Zenith Oscillator) made out of Silicon

Crystal: Domed sapphire crystal with anti-reflective treatment on both sides 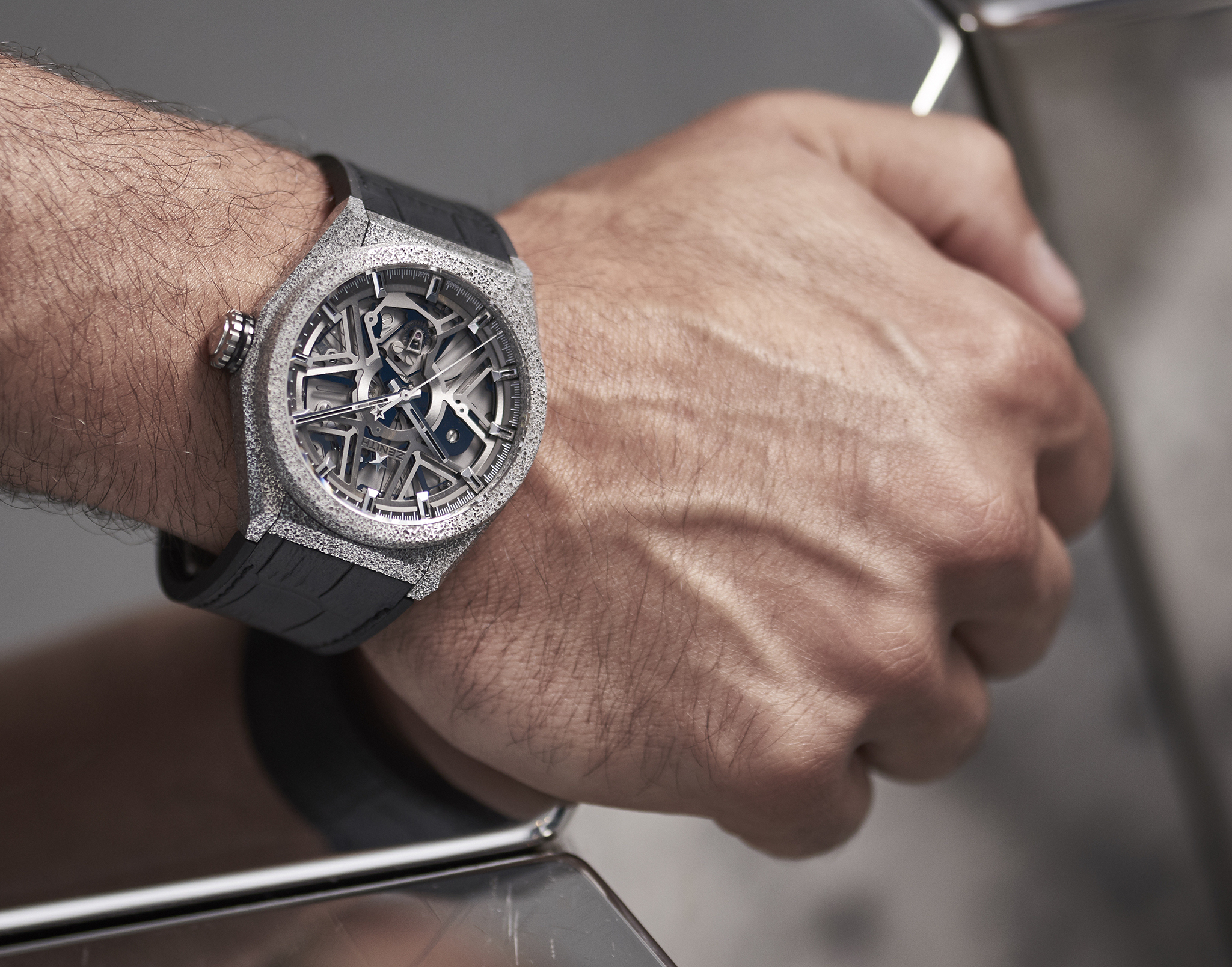 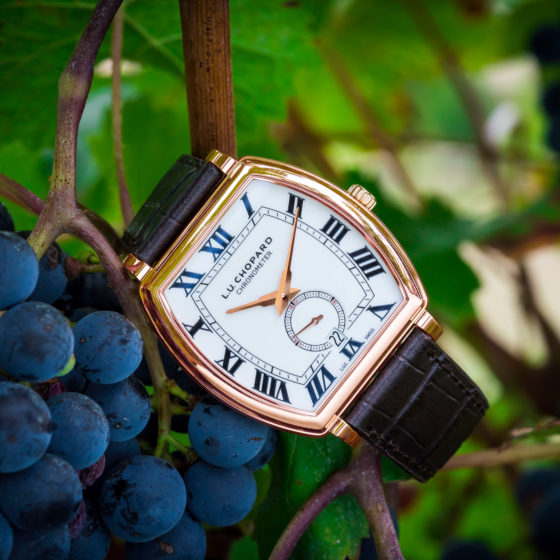 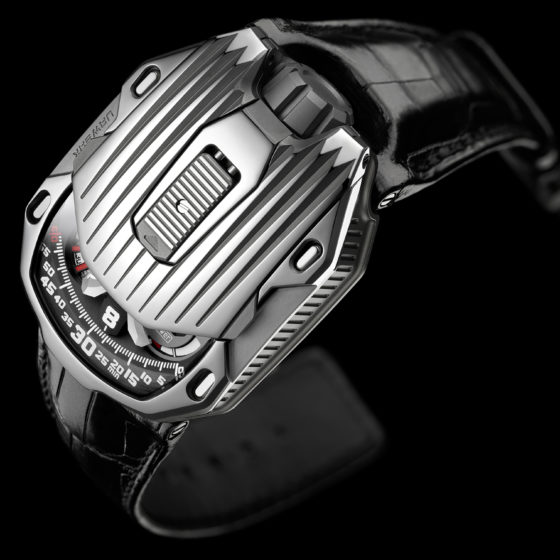