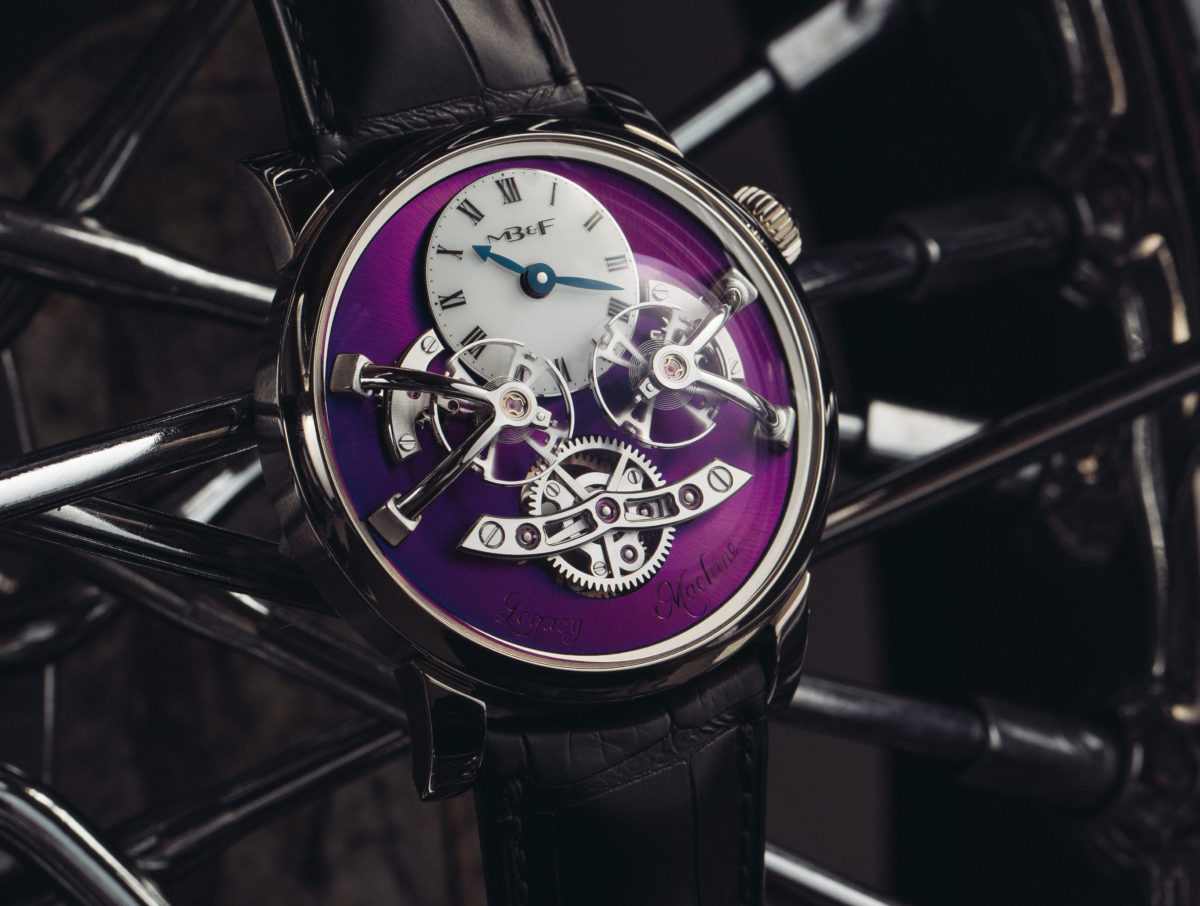 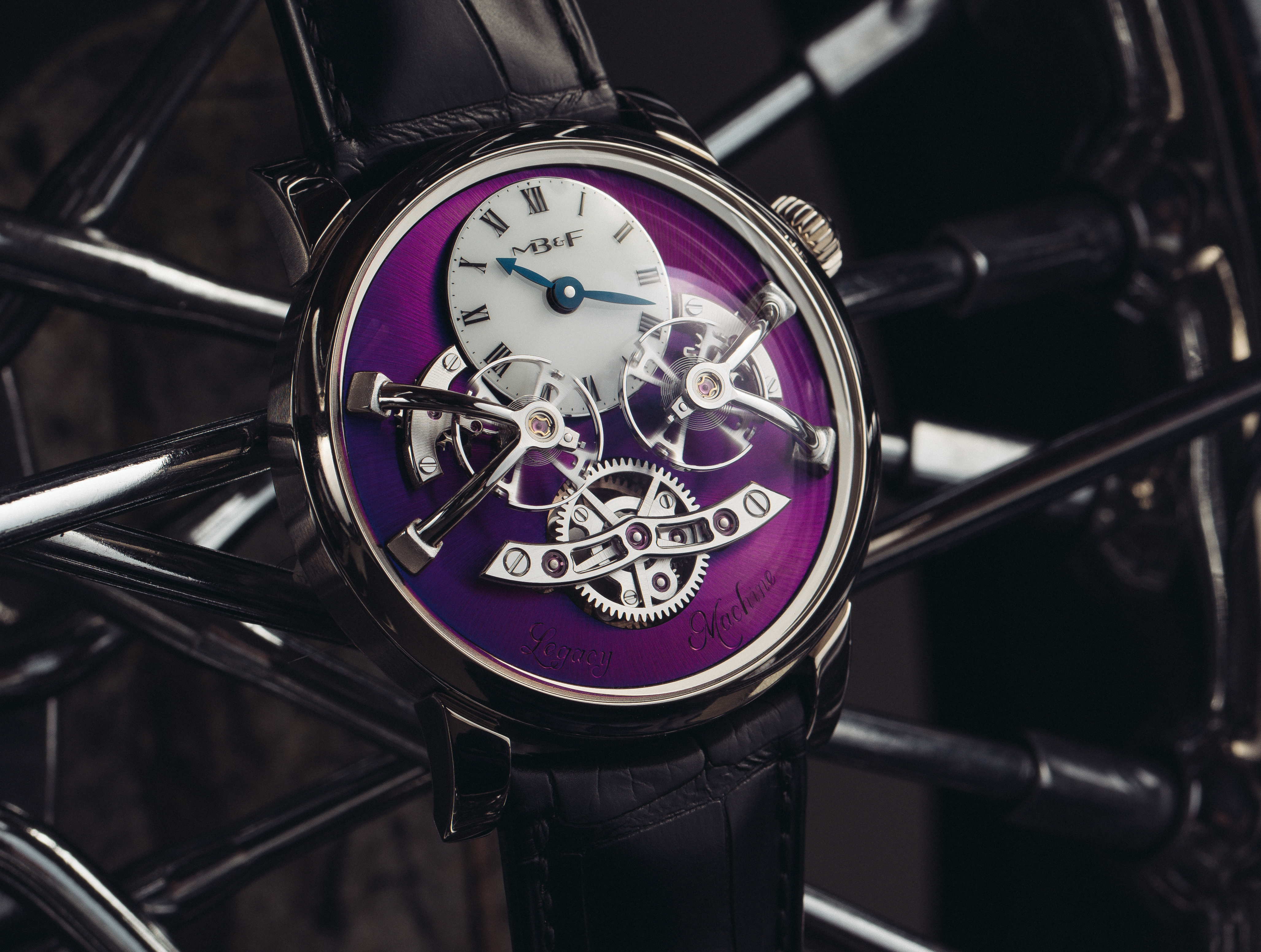 In human beings, the visible spectrum of light falls between red and violet, with infra-red and ultra-violet lying just beyond these two extremes.

When we see the colour purple, what our eyes are actually taking in is the highest possible frequency of light that the human eye can perceive. Legacy Machine No.2 also lies at the highest end of its horological spectrum. When it was first presented in 2013, it was one of the most forward-looking expressions of traditional mechanical watchmaking in the market. Even today, LM2 still occupies the end-zone of innovative horology, and a new version, presented with a purple dial of arresting visual depth, embodies this position. 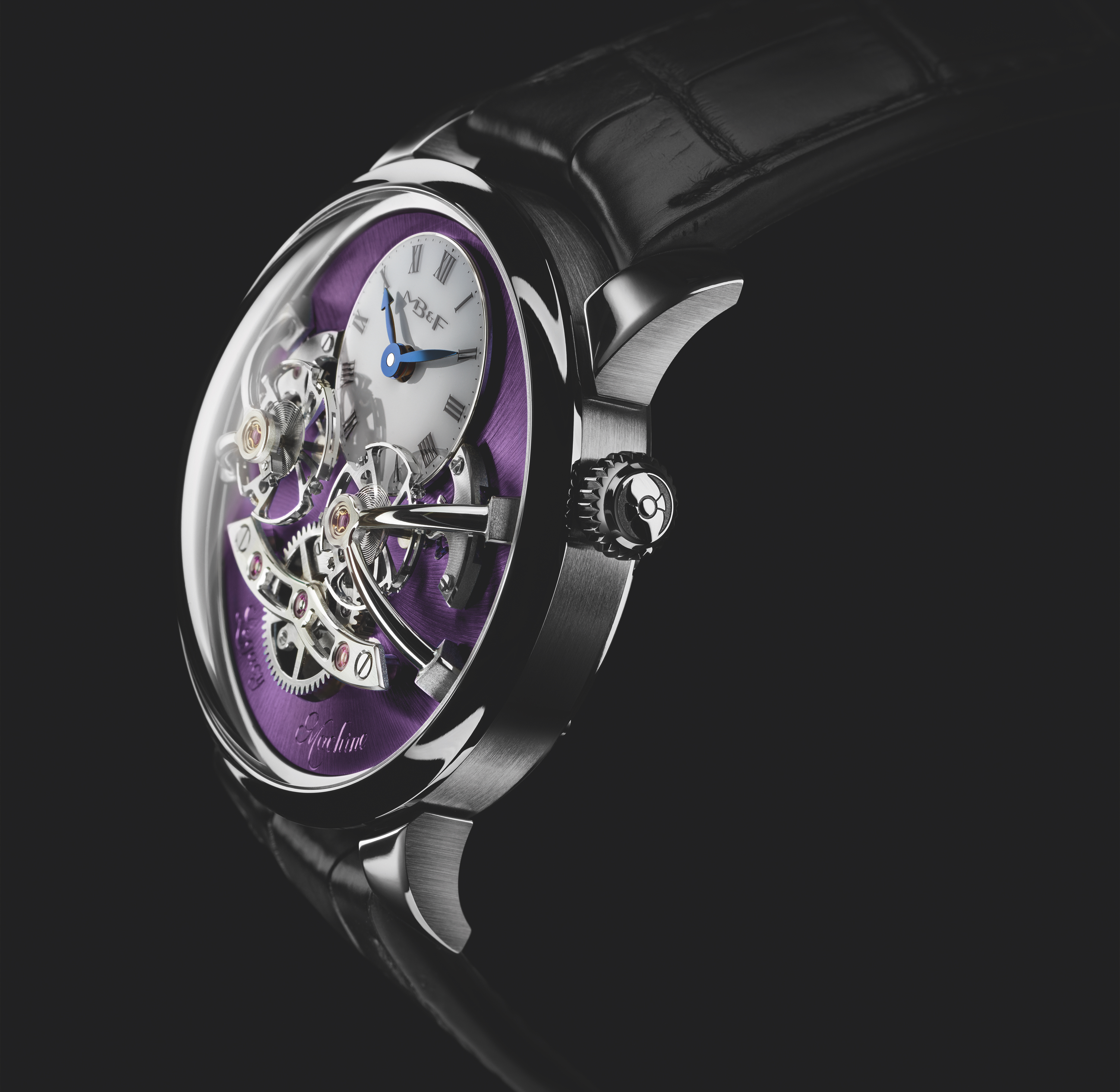 Back in white gold, the material of one of its launch editions, LM2 frames its hypnotic engine in a case that is discreet yet precious. Following the sleeker balance bridges of the redesigned LM2 Titanium, the LM2 White Gold Purple offers a more elegant take on the original industrial aesthetic of the first LM2. The sunray-finished dial plate is given its purple hue via the process of chemical vapour deposition (CVD), which evenly coats the dial surface and gives it a multi-faceted colouration under different angles of light — ranging from a deep violet to an almost electric shade of plasma purple. Legacy Machines are wondrous reinterpretations of significant horological inventions by the greatest watchmakers in history. So the contemporary look endowed by the otherworldly appearance of Legacy Machine No.2’s dual flying balances, suspended high above the dial from four gracefully arcing arms, may at first appear paradoxical. But make no mistake; LM2 is a timepiece tracing its lineage back over 250 years to three of the greatest watchmakers who ever lived: Abraham-Louis Breguet (1747– 1823), Ferdinand Berthoud (1727– 1807) and Antide Janvier (1751– 1835). 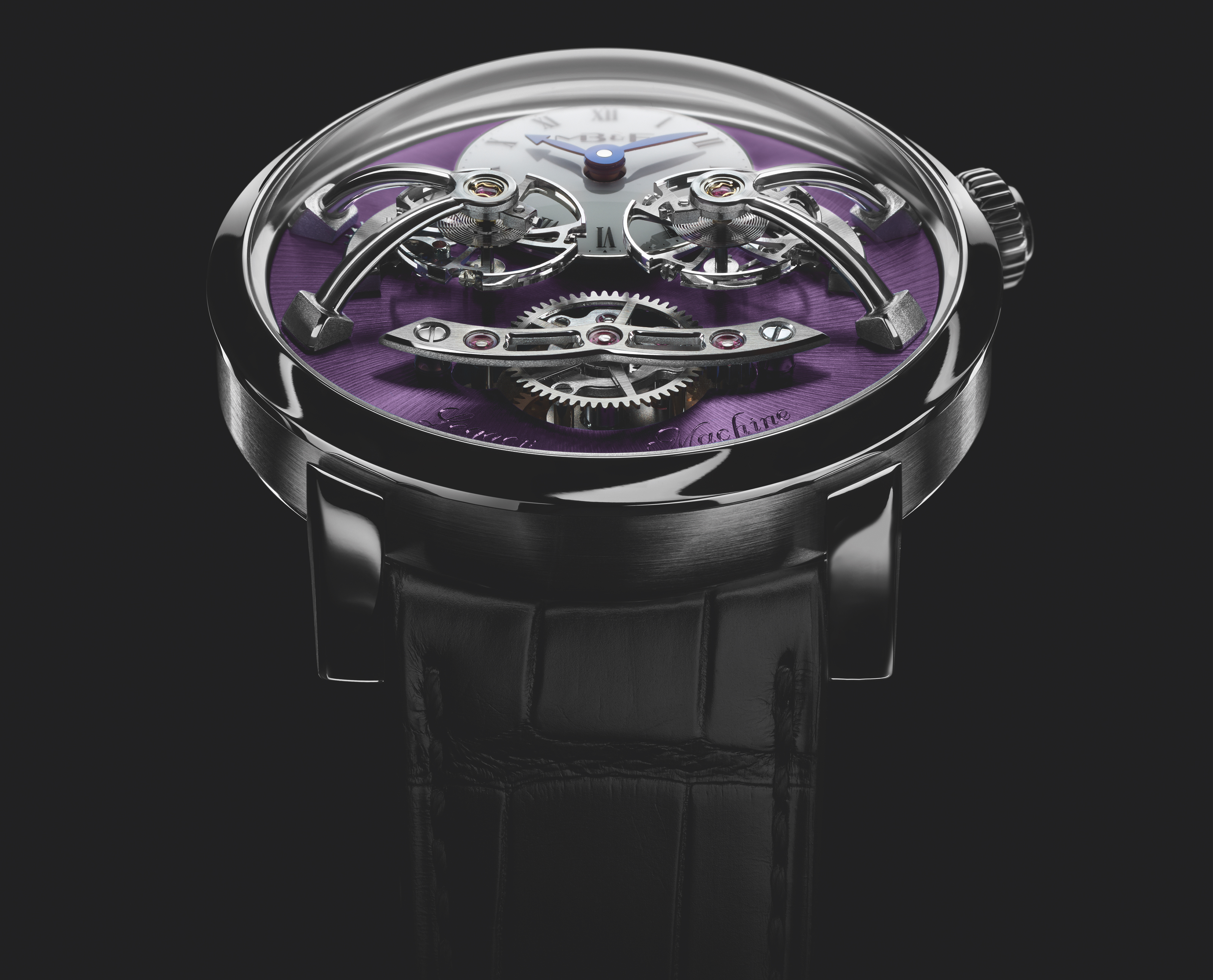 These horological legends of the 18th century are united not only by their inventive genius, but also by the fact that they have all constructed clocks and watches with two balances. Oscillating on high, the exalted double balance wheels of LM2 were inspired by, and pay homage to, one of the rarest mechanisms in the history of watchmaking: the dual regulator. And rarer still, the average rates of Legacy Machine No.2’s dual regulators are transmitted by a differential to a single gear train, where the majority had two separate movements. On display under a domed sapphire crystal cupola, the dial of Legacy Machine No. 2, which is actually the top plate of the exquisitely finished movement, is an object lesson in symmetrical simplicity. Top to bottom: the white stretched lacquer sub dial at 12 o’clock, with its blued gold hour and minute hands, is visually balanced by the large, raised differential at 6 o’clock. Left to right: the two flying balances and their escapements are identical mirror images, right down to the position of the stud holders pinning their balance springs. 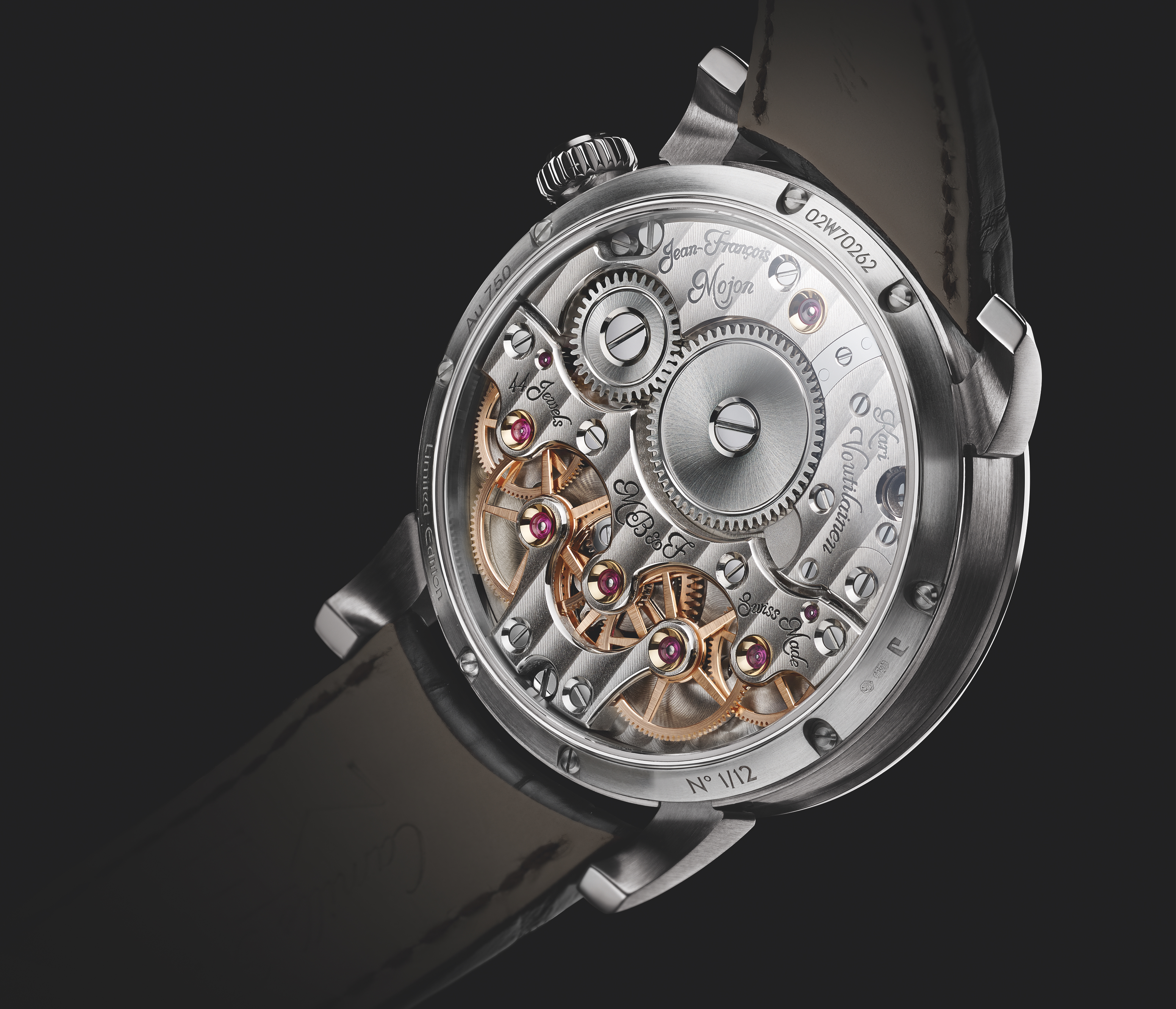 While the levitated oscillating balance wheels of the binary regulators catch and hold the viewer’s gaze, it is the large planetary differential sitting proud of the dial that is the real heart of Legacy Machine No.2. In an incredible feat of micro-engineering − and the sheer paucity of timepieces with multiple regulators connected via a differential attests to the enormous difficulty in creating such a complex high-precision mechanism − the differential has three roles: 1. Transferring power to each of the regulators; 2. Receiving the individual timing rates from each balance; and 3. Transmitting the average rate of the two regulators to the gear train, where it finally manifests itself as the displayed time. The movement of Legacy Machine No.2 was developed to MB&F’s specifications by award-winning watchmaker Jean-François Mojon (Best Watchmaker at the 2010 Grand Prix d’Horlogerie de Genève) and his team at Chronode.  Acclaimed independent watchmaker Kari Voutilainen ensured that the movement’s aesthetic style was consistent with high-quality traditional timepieces of the 19th century and for specifying the superlative hand-finishing. 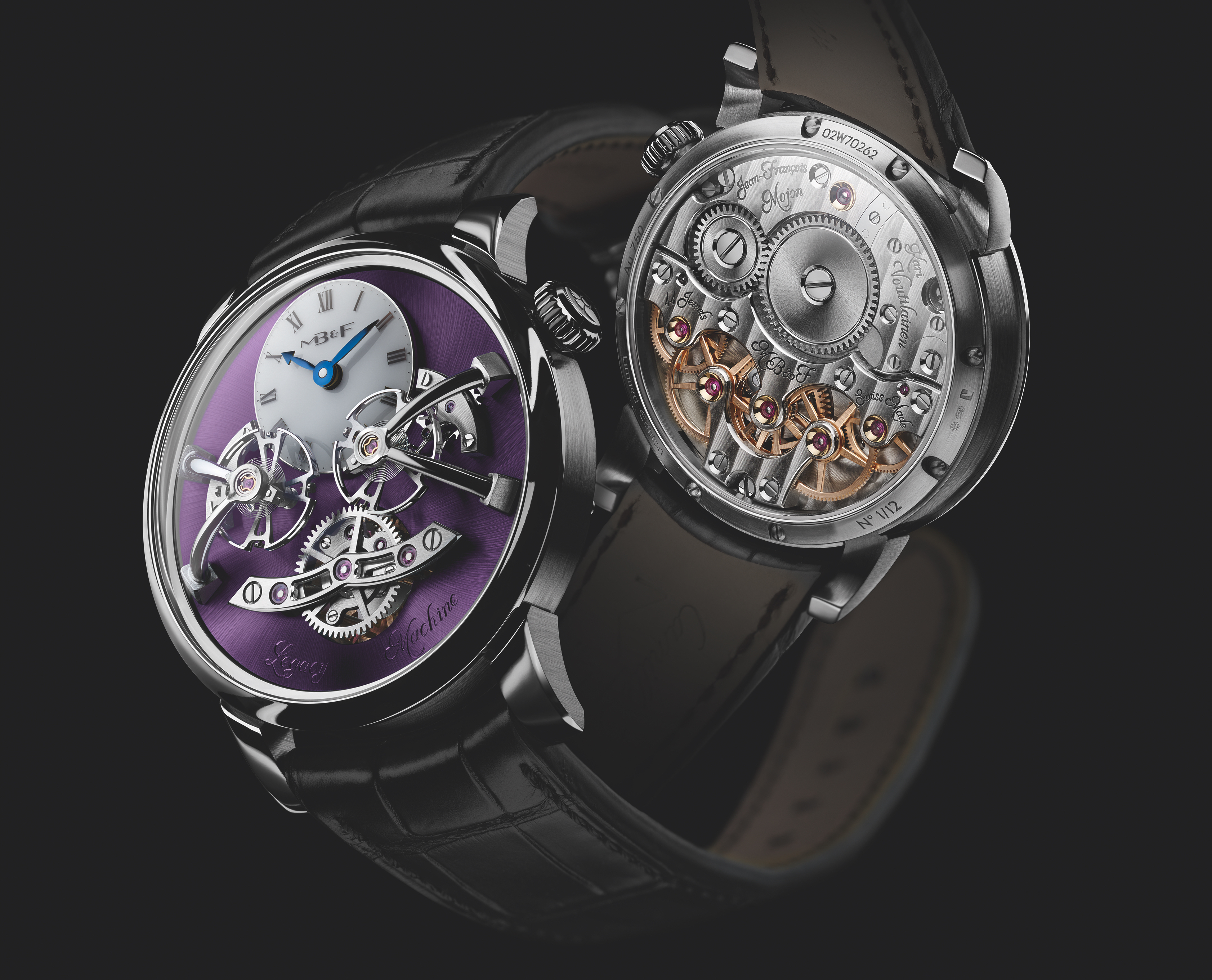 Immaculate Geneva waves, gold chatons, mirror-polished bevels and bridges designed with deliberate internal bevelled angles (which cannot be finished by machine) showcase the movement’s peerless fine finishing. Consistent with MB&F’s spirit of transparency, the names of the two men responsible for the movement are hand engraved on the back. Two and a half centuries after three of the world’s greatest watchmakers put two balance wheels into their movements, MB&F celebrates their pioneering works by creating LM2, a timepiece with two balances hovering outside the movement. Legacy Machine No.2 was launched in 2013 in 18k red gold, 18k white gold and a limited edition of 18 pieces in platinum 950 and was redesigned in 2017 for a limited edition of 18 pieces in titanium. Legacy Machine No.2 White Gold Purple is the latest of the series, a limited edition of just 12 pieces. 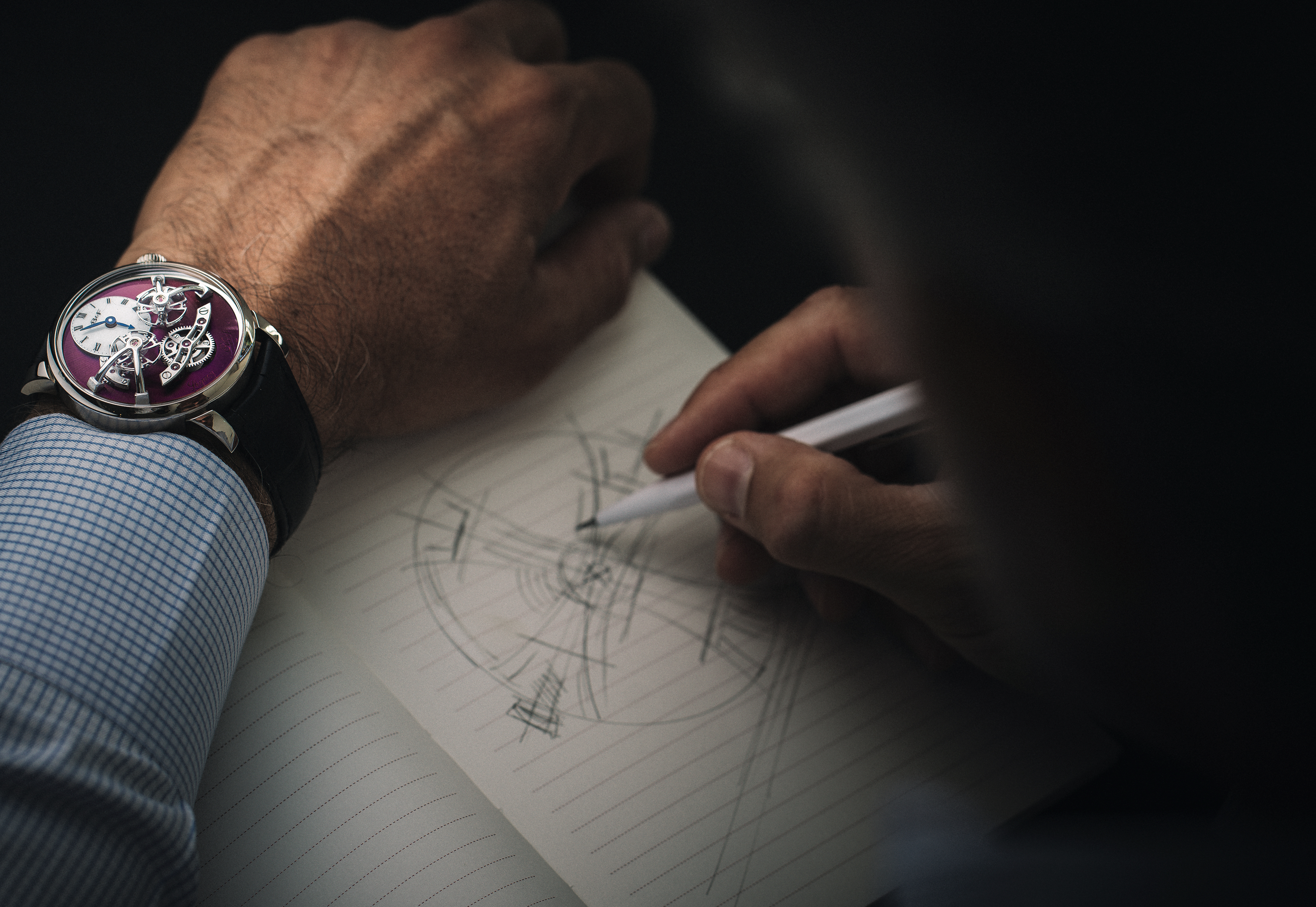 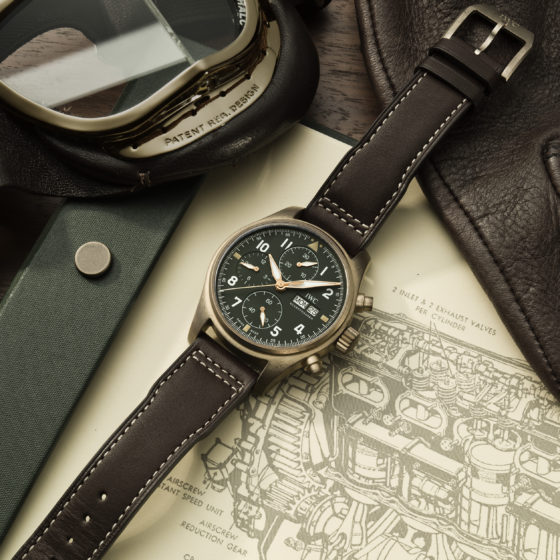 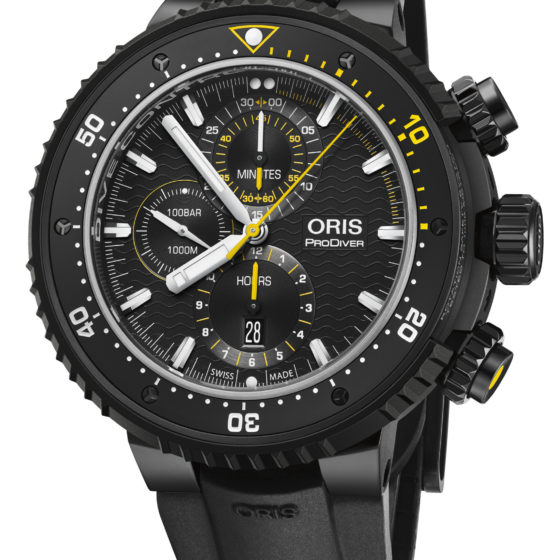