A new brand, which resurrects a far-famed watchmaker – Ferdinand Berthoud and his heritage back to life.

Stemming from a reflective process undertaken in tribute to the horological genius of Ferdinand Berthoud, the new timepiece from Chronométrie Ferdinand Berthoud embodies a modern vision of the creations that the master might create if he were still living today. Karl-Friedrich Scheufele, President of the Chronométrie Ferdinand Berthoud, wanted this exceptional new timepiece to represent a continuation of the work of the master chronometer-maker. This was to be done by adopting a contemporary approach guided by the same innovative spirit, while drawing inspiration from the marine chronometers created by the master watchmaker.

Ferdinand Berthoud with his Légion d’Honneur

By giving a new lease on life to the name and the horological feats of Ferdinand Berthoud providing them with a contemporary expression, Chronométrie Ferdinand Berthoud ushers the talent of this accomplished chronometer-maker into a new creative era that exalts the finest aspects of the watchmaking art. This dynasty of master-watchmakers dates back to 1753 when Ferdinand Berthoud officially earned the title of Master Clockmaker in Paris. He established himself as one of the most talented watchmaker-engineers of his era, making an indelible mark on history with his remarkably accurate marine chronometers. Capable of measuring longitudes to within less than half a degree, the chronometers developed by Ferdinand Berthoud would enable France to vie with England for maritime supremacy – and earn their creator the prestigious title of “Horloger Mécanicien du Roi et de la Marine” -Horologist-Mechanic by appointment to the King and the Navy- under the reign of Louis XV. 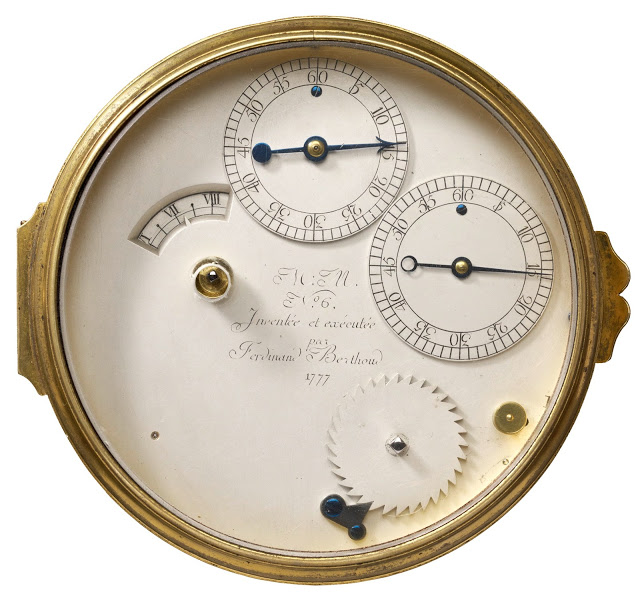 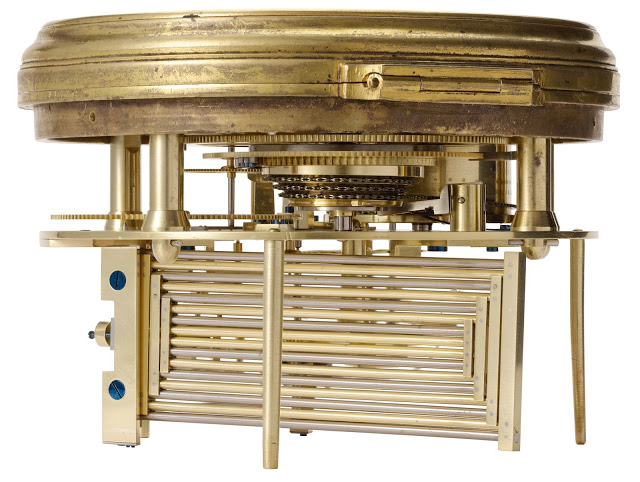 Marine clock M.M. n° 6, dated 1777 and kept in the Chopard L.U.CEUM museum in Fleurier, represents one of the main sources of inspiration that guided the rebirth of Chronométrie Ferdinand Berthoud. This marine chronometer is driven by a movement equipped with a constant-force module, an astonishing fusée – chain transmission system as well as a superb pillar-based construction. The new Chronomčtre Ferdinand Berthoud FB 1 reprises these prestigious characteristic features, as well as the profound attachment to reliability and chronometric precision that are the fundamental qualities of the new watches from Chronométrie Ferdinand Berthoud.

The octagonal-shaped case of the Chronomčtre Ferdinand Berthoud FB 1 features a specific architecture inspired by the marine chronometers developed by the Swiss master-watchmaker, and in particular their gimbal suspension system typical of ship’s chronometers. The movement is housed in a water-resistant container, while the case middle takes on an octagonal shape due to the addition of screwed-on gold elements endowing it with a powerfully contemporary appearance. These octagonal add-on sides open onto four lateral sapphire portholes providing a chance to admire the subtle intricacies of the movement. The 44 mm-diameter case is water-resistant to 30 metres and fitted with a glareproofed screw-down sapphire back.

It provides a captivating view of the tourbillon and reveals the complex fusée – chain mechanism. This window onto the heart of the movement allows light to flood through the case, illuminating the mechanisms visible through the four water-resistant lateral portholes. The pleasingly round bezel is topped by a domed, arched and glareproofed sapphire crystal ensuring optimal legibility of the dial indications. Secured by bolts whose design is directly inspired by those used by Ferdinand Berthoud for its marine clocks, the inter-horn space is clothed with high-tech materials – grade 5 titanium for the white gold version and black ceramic for the rose gold version – accentuating the resolutely modern nature of this new watch. The screw-lock crown at 3 o’clock is elegantly set with a rose gold medallion on the white gold case and a black ceramic version on the one in rose gold, while its generous diameter and refined knurling ensure an optimal grip enabling easy adjustments of the movement.

Equipped with a remarkable low-frequency (3 Hz) tourbillon with central seconds, this exceptional movement also features a constant-force regulating device with suspended fusée – chain transmission, a differential-based winding system, as well as a highly specific power-reserve mechanism called a “suspended mobile cone”. The result of almost three years’ research and development, culminating in cutting-edge reliability tests, Calibre FB-T.FC delivers exceptional precision and rating regularity duly certified by the Swiss Official Chronometer Testing Institute (COSC), along with 53 hours’ autonomy and optimal readability of its hours, minutes, seconds and power-reserve functions. Inspired by Berthoud regulator-type clocks, the particularly slim, long spokes of the gear wheels are decorated with meticulous care. Patiently circular satin-finished, bevelled and countersunk, they subtly reflect the light onto the pinions. Patents have been filed for several of the unprecedented mechanisms composing this new calibre.

The power-reserve device of calibre FB-T.FC is also extremely specific and innovative, inspired by a mechanism developed by the famous British watchmaker Georges Daniels – and a nod to the ties with England cultivated by Ferdinand Berthoud. This mechanism directly linked to the barrel by a driving wheel, uses the winding and letting down motion of the mainspring to make a truncated cone move up and down along an arbor  secured to the mainplate. A mobile arm tipped with a roller jewel serves as a feeler-spindle in measuring the motion of the cone and transmitting the movement’s power-reserve level to a dedicated hand.

Focusing firmly on time read-off and the display of its precise measurement, the dial of the Chronometrie Ferdinand Berthoud FB 1 is as understated in its appearance as it is technically complex to produce. The off-set hours and minutes tick by on a white-lacquered subdial at 12 o’clock. Standing out against a black satin-brushed or ruthenium background depending on the case material, the seconds scale appears on a matt translucent sapphire surrounding the dial. In the centre, an opening with carefully chamfered contours reveals the seconds wheel-and-pinion and the driving wheel of the tourbillon carriage – each turning in the opposite direction to the other. Meanwhile, the movement power reserve is indicated on a scale directly engraved on the mainplate and shown at the heart of a 9 o’clock counter. Its degree of autonomy is signalled by an arrow pointing to the words “Haut” or “Bas” – the French terms for high and low written in the native language of Ferdinand Berthoud. Alongside the confirmation of “Chronometer” certification appearing at the bottom of the dial, the inscriptions “Val-de-Travers” and “Switzerland” underscore the hand-crafted nature of this precious timepiece entirely developed in the birthplace of the master-watchmaker.

Meticulous care has been lavished on the execution of the hands, inspired by the characteristic shapes of creations bearing the Ferdinand Berthoud signature. Crafted in 18-carat gold, they adopt complex and original designs calling for particularly sophisticated production processes. The dagger-shaped hours and minutes hands are cut-out and facetted, while the extremely long and slim central sweep-seconds hand is made of bronze and fitted with a round counterweight typical of Ferdinand Berthoud regulators. The power-reserve indicator features a curved triangular tip. Designed to match the shade of the dial, these pointers are all are delicately blued or gilded according to the version and guarantee perfect readability of the functions while enhancing the clarity of their precision. The understated lines and contemporary refinement of the Ferdinand Berthoud chronometer extend right the way through to the hand-sewn rolled-edge alligator leather strap. This supple yet sturdy wristband composed of one skin sewn with a linen thread is secured by an 18-carat gold double-blade safety folding clasp fitted with a length-adjustment device typical of the new timepieces from the House.

Both versions of this watch are limited to 50 pieces. 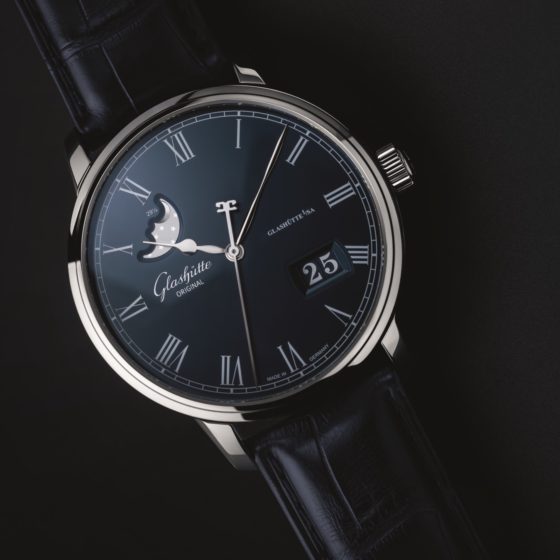 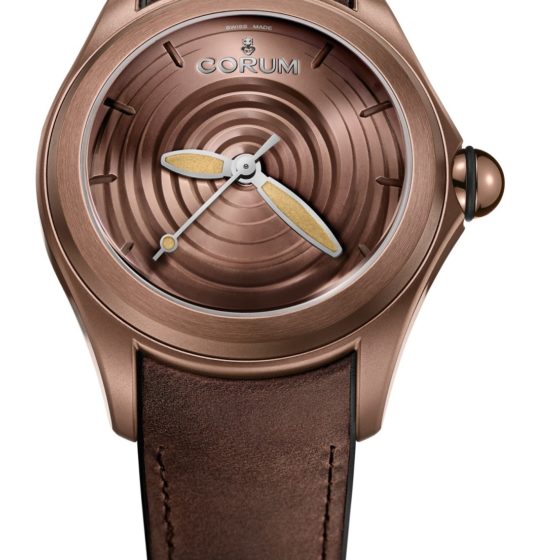